Maxwell Chirehwa is a research officer in the Division of Clinical Pharmacology in the Department of Medicine at the University of Cape Town (UCT). He has been with the university since July 2013, first as a PhD student and then as a postdoctoral research fellow before his current appointment.

Chirehwa is originally from the small rural district of Nyanga in the eastern part of Zimbabwe. He stayed there for the better part of his life before starting his tertiary education. Growing up, he loved mathematics, but also had a soft spot for pharmacy, just because his uncle and aunt were pharmacists.

Chirehwa went on to complete a master’s degree in biostatistics with applications in public health at the University of Zimbabwe in 2008. His research focused on describing the relationship between socio-demographic characteristics and the rate of new sexual partner formation among adolescent girls in areas with a high risk of HIV infection.

After two years of conducting public health research, he was awarded the Vlaamse Interuniversitaire Raad – Universitaire Ontwikkelingssamenwerking scholarship to study towards a master’s degree in statistics, specialising in biostatistics at Hasselt University, Belgium. It was an honour for him to sit in classes taught by distinguished biostatistics professors. In the second year of his master’s degree (2012), he applied a newly developed statistical method to describe the spatial distribution of three fish species in the North Sea.

Chirehwa’s research is in the field of pharmacometrics, which uses mathematical and statistical models to describe the time course of drug concentrations in the body and to explore relationships between these concentrations and drug effects (both beneficial and harmful). The focus of his research is on antituberculosis drugs. Pharmacometrics is a very scarce skill globally.

He also engages in the co-supervision of PhD students, maintenance of pharmacometric modelling software on UCT’s high-performance computing environment and assisting clinical researchers with statistical aspects of their research.

Five years ago, together with colleagues at Stellenbosch University, he developed and implemented a curriculum for a master’s degree in biostatistics. Recently, he has been participating in an initiative to build pharmacometric modelling capabilities in Africa. His motivation derives from the analysis of complex data to draw clear and simple conclusions to improve treatment outcomes.

“Maxwell is an incredible asset to our research group. His pharmacometric and statistical skills are both crucial for the clinical drug studies that we do. He has made important contributions to optimising doses of drugs used to treat tuberculosis,” said Gary Maartens, head of the Division of Clinical Pharmacology.

Chirehwa has already attended nGAP meetings and contributed his experience of UCT and his medical expertise in terms of making sense of COVID-19.

“I hope to learn from other associates and contribute significantly to the success of the prestigious nGAP programme.”

UCT has responded energetically to the New Generation of Academics Programme (nGAP), an opportunity provided by the Department of Higher Education (DHET) to build a new generation of black South African academics. The DHET’s 2015 vision document, “Staffing South Africa’s Universities Framework: A comprehensive, transformative approach to developing future generations of academics and building staff capacity”, proposes a suite of initiatives to address the challenge, with nGAP being the major instrument to increase the numbers of black South African academics.

The programme “involves the recruitment of highly capable scholars as new academics, against carefully designed and balanced equity considerations and in light of the disciplinary areas of greatest need”. The nGAP scholars are appointed into permanent positions where from the outset their conditions are customised to ensure their successful induction into the ranks of established academics.

The DHET provides funding over a six-year period to support the appointment of an nGAP lecturer, and their time is protected to provide the best possible opportunity for the completion of a doctorate degree in the shortest possible time. Once the degree is completed, the nGAP lecturer’s teaching commitments are steadily increased until they shoulder a full teaching load.

UCT’s nGAP scholars operate as a single cohort, managed and coordinated by Dr Robert Morrell. Lecturers meet for quarterly meetings, writing retreats and various capacity-building activities all designed to support the completion of postgraduate qualifications (particularly doctorates) and to develop records of achievement that will testify to their emergence as self-standing, excellent academics. Each lecturer is mentored by a senior scholar, who provides support and guidance on the challenges that routinely face academics.

The nGAP manager sets great store in building the cohesion of the cohort and encouraging the establishment of new UCT networks while producing a collaborative, mutually supportive and embracing work culture.

According to Dr Morrell, “This group of academics will lead UCT in 15 to 20 years’ time ... Their vision of excellence, of being African and South African, of serving a wider community and producing knowledge for the planet, the continent and the country, will power UCT in years to come.” 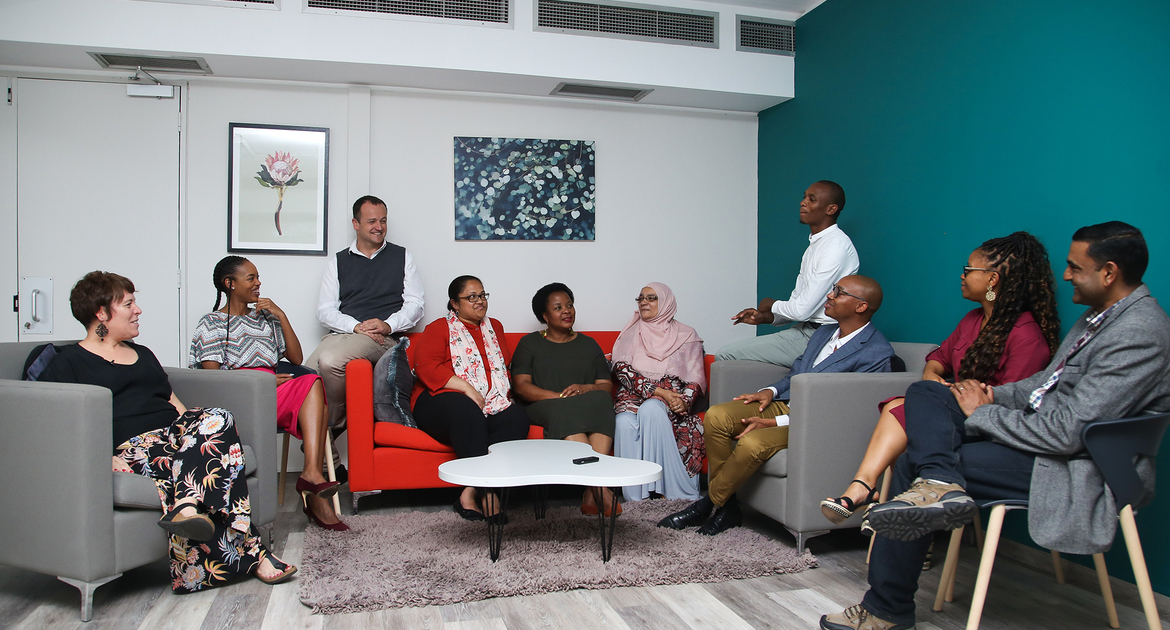 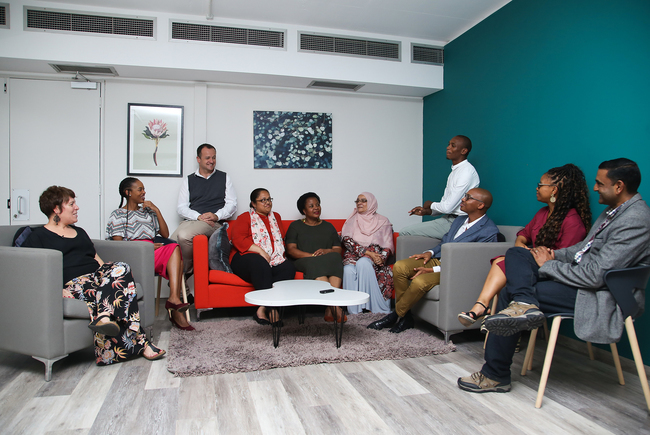 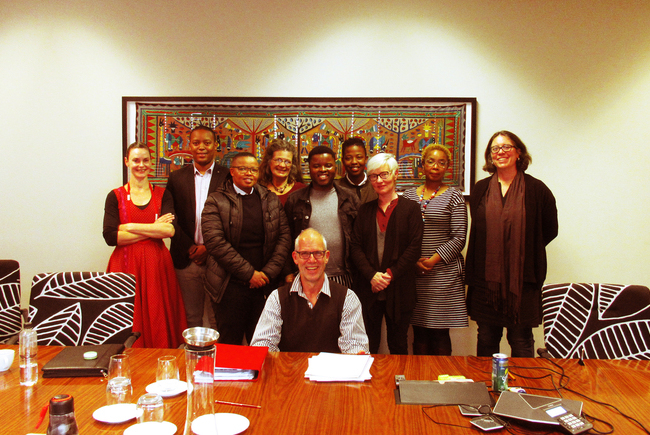 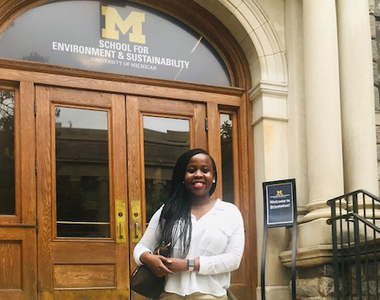 Research and innovation
Envisioning a bright future
Rising UCT academic Mochelo Lefoka says he has his grandparents to thank for instilling in him an understanding of the value of a quality education. 10 Dec 2018 - 9 min read Research and innovation
Why the people's Parliament is failing the people
Two researchers in law offer new insights into the failure of the recent no-confidence vote and efforts to hold the president to account for Nkandla. 19 Sep 2017 News
How do youth find their place in the world?
A UCT contingent’s July 2017 trip to Japan kick-started a research project that interrogates how citizenship is experienced and claimed by young South Africans and Japanese. 07 Sep 2017 News
Translating a path to success Xolisa Guzula is working hard to ensure that isiXhosa-speaking children are able to learn and read in their own language. 11 Jul 2017 Newsbyte
Decolonial Alternatives Project Space A former burial ground for black men, women and children who were taken into slavery on the Rustenburg slave plantation during the early colonial period will be developed into a unique heritage site at UCT. 14 Sep 2016 News
Meet a new generation of UCT academics Five new members of staff – all part of the New Generation of Academics Programme (nGAP) – speak about what brought them to UCT, and what they're doing to advance the fields of public law, anatomy, African studies, architecture and human geography. 26 May 2016 News
PhD examines complex governance systems in Kosi Bay It was the timely intervention of a far-sighted early mentor, Professor Dianne Scott, in Philile Mbatha's honours year at the University of KwaZulu-Natal that changed the course of her life. 26 May 2016 News
Professionalisation the tonic for municipalities' dysfunction Violent service protests across the country reflect the disjuncture between the needs of civil society's poorest and local government's roll-out of resources and services. It's a topic close to Phindile Ntliziywana's heart. One of UCT's five New Generation of Academics Programme (nGAP) participants, Ntliziywana's PhD examines how the public service, specifically local government, can be improved. 17 May 2016 News
'Why do we still aspire to whiteness?' Zuziwe Msomi, an nGAP* lecturer in the Centre for African Studies, is interrogating racial identity in post-apartheid South Africa. 16 May 2016 News
Sadiq Toffa, the nGAP scholar with a commitment to transformative knowledge The New Generation of Academics Programme (nGAP) is an initiative funded by the Department of Higher Education and Training (DHET) in partnership with individual universities that recruits young scholars into permanent academic positions at South African universities. 03 May 2016