Research by University of Cape Town (UCT) PhD graduate Dr Gabriella Leighton and colleagues has shown that organochlorine pollutants along Cape Town’s peri-urban fringes are present in concerningly high concentrations in the body tissue of the city’s caracals (or rooikat). This has potential long-term implications for their health and survival. This feature marks International Day for Biological Diversity on 22 May.

Focused action and better management practices are needed to help the city’s caracals survive, said Dr Leighton in a new research paper published in The Science of the Total Environment (Vol. 822) on 20 May 2022. Its publication highlights the International Day for Biological Diversity on 22 May. Caracals are the city’s apex predators after leopards were hunted to extinction on the Cape Peninsula in the 1920s, and our increasing awareness of their presence in the city is certainly in part because of current research efforts to understand the challenges they face.

The paper’s title describes the dilemma: “Poisoned chalice: Use of transformed landscapes associated with increased persistent organic pollutant concentrations and potential immune effects for an adaptable carnivore”. Its publication stems from Leighton’s doctoral research in UCT’s Institute for Communities and Wildlife in Africa (iCWild) and contributes to the core goals of the Urban Caracal Project, a collaborative project based in iCWild whose focus on the city’s caracal provides broader insight into the effects of urbanisation on wildlife.

Organochlorine pesticides, such as dichlorodiphenyltrichloroethane (DDT), were used extensively between 1940 and 1960 as agricultural pesticides and for mosquito control in South Africa. Representative compounds in this group also include other pesticides, for example, methoxychlor and dieldrin. Their use has been severely curtailed in recent years because these compounds become a permanent part of the environment (ie, persistent organic pollutants (POPS), or “forever chemicals”), with well-established health impacts on humans and wildlife.

The problem is aggravated in many African countries, where illegal use of chemicals is common, and the regulation of sales and usage is poorly maintained. In South Africa, for example, DDT is still legally applied to combat malaria in high-risk areas (it was first banned in 1974). But the spill-over of POPS into natural areas on the urban fringes of our cities is likely to affect humans, livestock and biodiversity. 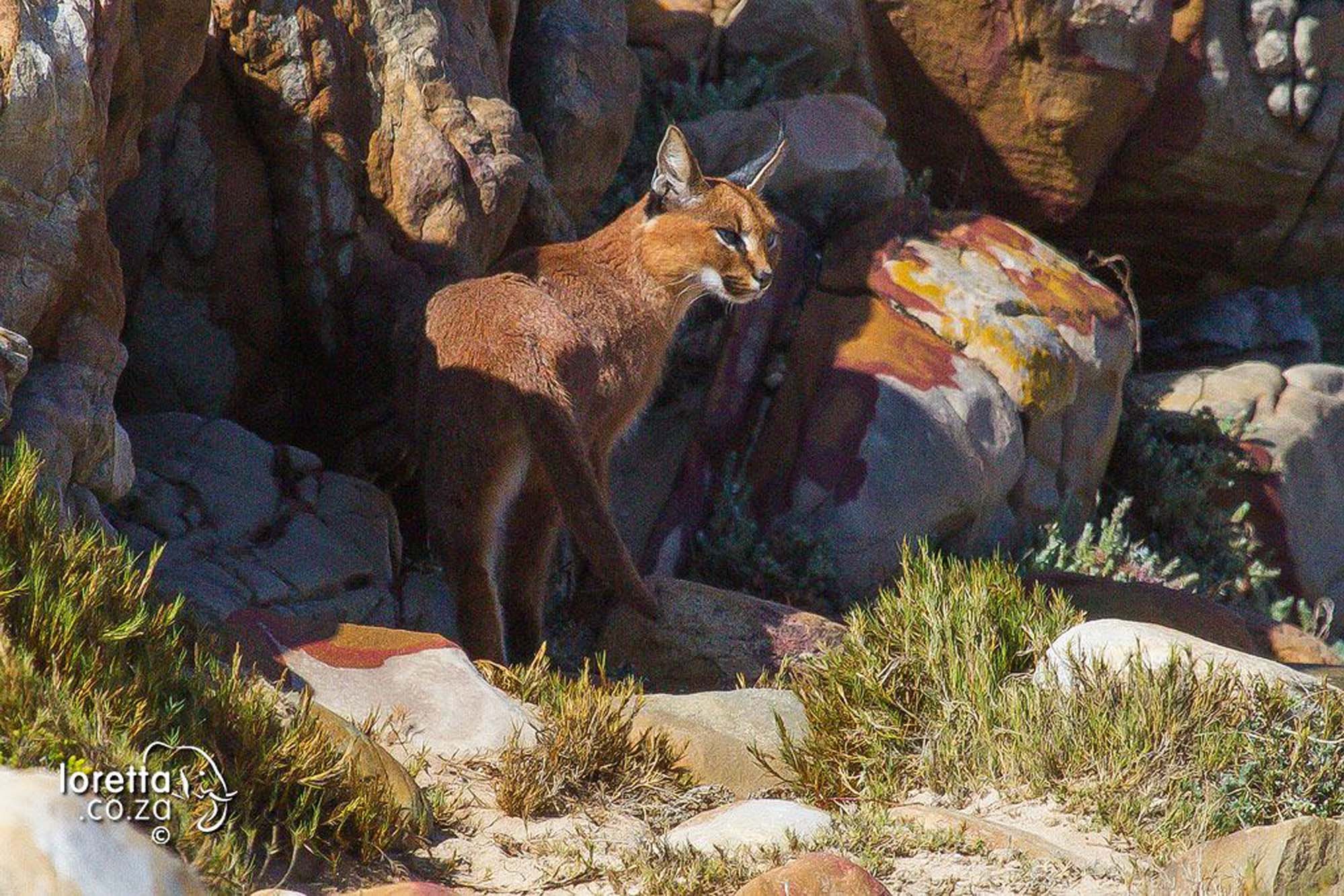 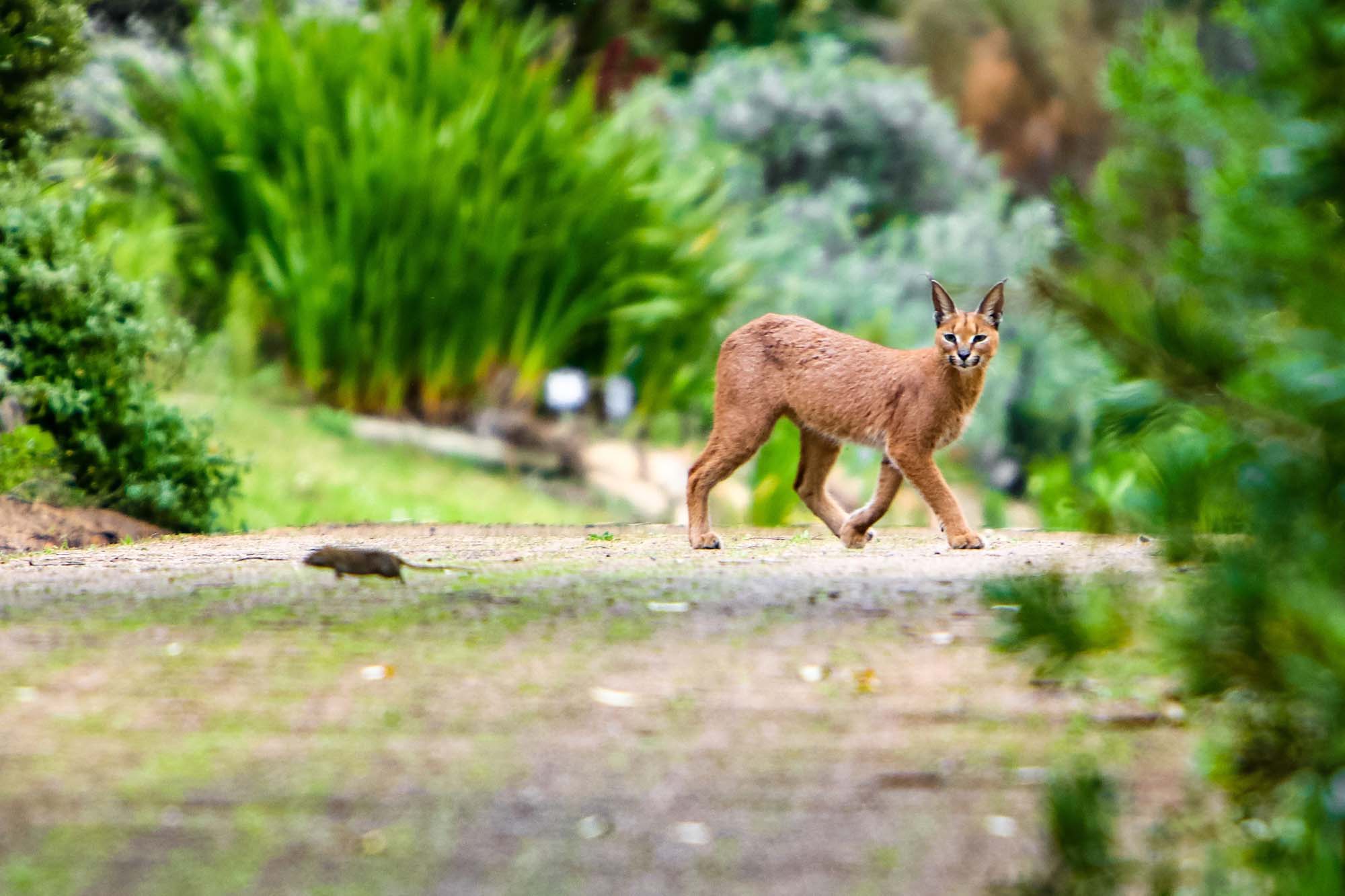 Caracals are found in a broad range of settings on the city fringes, from wetlands and coastal areas to mountains and vineyards. Photos Jacque Smit, Kervin Prayag, Luke Nelson, Andrew Jenkins, Loretta Purvis.

“While many species have become locally extinct across the world’s cities, others thrive in urban areas, particularly where they have adjusted their behaviour and honed their skills to successfully exploit the resources of urban areas,” said co-author, Dr Jacqueline Bishop.

Here in Cape Town the shy but highly adaptable caracal population has carved a niche. Caracals have a very broad and flexible diet, enabling the species to take advantage of valuable prey resources, and contributing to their success in human-transformed landscapes. Habituated to the ‘rich pickings’ on the city fringe, this new research reveals that caracals may bioaccumulate toxic pollutants through their prey, particularly reptiles, birds and animals preying on insects. These findings point to widespread exposure to organochlorines across local food webs. At the top of the food web, caracals act as useful indicator species for these overall patterns, said Leighton.

Vineyards are particularly highly selected by caracal for foraging. However, this land-use is also associated with higher DDT and anticoagulant rodenticide exposure, said Leighton. Despite occupying a small percentage of the available landscape on the peninsula, these “transformed landscapes” may be particularly toxic areas for caracals and other wildlife.

Blood and fat tell a story

The iCWild team’s tag-and-track project has been essential to Leighton’s work. This collates data on the cats and their home ranges via GPS-enabled collars. In Cape Town, home ranges and habitat use vary considerably between individual caracals. One collared individual frequented an area of 1 km2; a small vineyard in Wynberg west of the M3 highway. Another had a range of 67 km2. A female caracal was found to hunt seabirds along Noordhoek beach, close to the wetlands, and there are GPS locations for her in tidal pools on the beach. Another individual ranged from the front of Table Mountain to Kalk Bay, while two were tracked through Rondevlei and the Philippi Horticultural Area.

Samples for the study were collected from collared cats, as well as those found opportunistically, usually killed in road accidents – the cats are generally nocturnal hunters and move at night when they are less visible to motorists.

Leighton’s study is based on 25 adipose (fat) and 69 blood samples taken from 56 individuals across the study area, which were analysed using specialised equipment in the ecotoxicology laboratory overseen by co-author Professor Rafael Mateo at Universidad Castilla – La Mancha, Spain. These samples also revealed elevated white blood cell and platelet counts in those individuals with higher organochlorine exposure, which suggest a possible link to compromised immunological responses and increased susceptibility to disease. The pollutants can also impact reproductive fitness, and may thus have population-level effects, but this has yet to be tested, according to Leighton.

The occurrence of organochlorines in caracal tissues was high for both DDT and polychlorinated biphenyls (PCBs), another pollutant often used in electrical equipment. PCBs were found in 100% of the blood samples, while DDT exposure was recorded in 83% of blood samples. Fat samples showed a 100% occurrence of both PCBs and DDT, with higher concentrations than in the blood samples.

“Overall, our findings point to a mismatch between risk and rewards in novel urban ecosystems,” said Leighton. “This suggests that caracals may be falling into an ecotoxicological trap. Globally, research has shown that once these toxins enter ecosystems they can cause neurotoxicity, carcinogenesis, hormone disruption, behavioural changes, reproductive impairment and altered immune function in wildlife.”

Unfortunately, this is a global trend. Wildlife in rapidly urbanising areas is threatened by ongoing habitat transformation and anthropogenic mortality. Leighton’s paper also calls for focused mitigation action and better management practices to help the caracals survive as part of a broader ecosystem rich in biodiversity.

“It’s important to understand the extent [of the problem] so that mitigative action can be planned to conserve these animals and alleviate future population declines.”

“South Africa still has a major issue with illegal use from stockpiles of obsolete pesticides, complicating mitigation efforts.”

Understanding the spatial and dietary predictors of these contaminants can inform pollution control, and with carnivores representing good sentinel species, she added.

“South Africa still has a substantial issue with illegal use from stockpiles of obsolete pesticides, complicating mitigation efforts. Additionally, where there is the legal use of DDT in malaria areas, there remains the ongoing risk of spill-over to wildlife in conservation areas. Further research on organochlorine concentrations in soil, air, water and prey species around South Africa’s cities is needed.”

Leighton added, “However, it is clear that organochlorine exposure is a contemporary issue for South African wildlife, justifying the reinstatement of a nationwide pesticide disposal programme, and incentivising farmers and landowners to catalogue and properly dispose of pesticide stockpiles.”

These efforts should focus on agricultural areas, particularly those with vineyards and or informal settlements (Greater Cape Town has around 290 informal settlements), as these were the land-use types most strongly associated with exposure, she said.

“Further, wetland clean-up, such as dredging or capping sediments, or bioremediation using microorganisms, is necessary to remove organochlorine pollutants in our urban wetlands.”

“The bioaccumulation of pollutants we document suggests that apex predators, such as leopards, an IUCN Vulnerable species, together with avian predators, will also experience indirect dietary exposure. Our results highlight the need to further investigate the health impacts of organochlorines and potential role of pollutant exposure in species decline.”

It’s an area that requires urgent research to guide the development of biodiversity conservation priorities and mitigation, Leighton concluded. 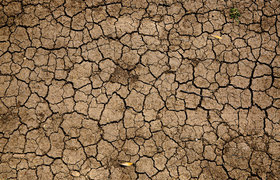