A leading cause of death in SA, head trauma is under-researched

Traumatic brain injury (TBI) remains an under-researched area, despite the large burden of disease it represents. There is currently little data on incidence, outcomes and quality of clinical care administered. Professor Anthony Figaji, the head of the Paediatric Neurosurgery Unit at the University of Cape Town’s (UCT) Faculty of Health Sciences, has been awarded a multi-million-rand grant by the South African Medical Research Council (SAMRC) Strategic Health Innovation Partnerships (SHIP) programme and the Gabriel Foundation to explore the implications of TBI through research carried out at the university’s Neuroscience Institute (NI).

Head trauma is a leading contributor to the global disease burden in children and young adults. According to a National Health Insurance paper, Estimating the global incidence of brain injury, published by the US National Library of Medicine, it is estimated that 69 million individuals worldwide sustain a TBI each year. The proportion of TBIs resulting from road traffic collisions was greatest in Africa and South-east Asia (both 56%).

An article on global neurotrauma published in Nature states that: “Nearly 6 million people die each year as a result of trauma, accounting for 10% of the world’s deaths – 32% more than the number of fatalities from malaria, tuberculosis and HIV/AIDS combined.”

Professor Figaji, the National Research Foundation’s (NRF) South African Research Chairs Initiative (SARChI) Chair for Clinical Neurosciences at the NI, added that “the leading cause of death in these patients is head trauma, or traumatic brain injury.”

“This grant is timely – the absolute burden of head trauma in our country is great, and so are the potential benefits to our population.”

In fact, according to a report on injuries and violence published by the World Health Organization, “road traffic injuries are predicted to become the seventh leading cause of death by 2030.”

As concerning as this statistic is, TBI remains under-researched in South Africa, despite the country having one of the highest incidences of TBI in the world. According to a Netcare Hospital article, “Traumatic brain injury is one of the leading causes of disability in South Africa … It has been estimated that 89 000 new cases of TBI are reported every year in the country.”

Figaji suggests a contributing factor to the gap in this line of research “may be a lack of appreciation that treatment really does make a major difference in outcome, largely by addressing what is called secondary brain injury – an array of physiological, biochemical and inflammatory changes that occur in the days following trauma to the brain.”

Local funding for a local cause

The SAMRC has awarded the two-year grant, the first of its kind funded nationally, to address the problem of head trauma or TBI as a major cause of death and disability in South Africa. Traditionally there has been little local funding for this type of research in South Africa, because of the many and various other important and competing research areas in healthcare.

“This grant is timely – the absolute burden of head trauma in our country is great, and so are the potential benefits to our population,” said Figaji.

TBI can result in premature death at a young age, or in disability in survivors, including long-lasting neurological, cognitive, psychological and psychiatric problems. The burden of disease is impacted by the ongoing socio-economic implications of the sustained disability with which people must live. They may not be able to progress in the school system, their ability to sustain normal relationships can be compromised, the likelihood of finding and managing a job is often reduced, and they may suffer post-traumatic epilepsy.

“Even on the minor end of the spectrum, there is concern that we may be missing subtle injuries to the brain. For example, there is growing concern that some individuals may develop a chronic injury process from repeated concussions on the sports field that may lead to problems in later life. So it’s easy to see how extensive the impact is on the person, their family, and society at large – all caused by injury to the brain,” Figaji said.

The award was made possible through a matched philanthropic donation from the Gabriel Foundation, a long-standing investment donor to the NI.

Dr Jacqueline Bracher, the research enterprise manager of the NI, explained: “Philanthropic donations such as this are a precious source of revenue for the institute; and at a time when the global research funding stage has been rocked by COVID-19, are worth more than their weight in gold. The NI has a team of professionals who work closely with existing and prospective donors ensuring accountability and transparency, and that their contributions achieve greatest impact.”

“The brain is the most complex organ in the human body, [reflecting] who we are as individual, conscious human beings.”

The project covers several areas of importance in TBI research and clinical care, with a specific focus on children. It will examine the risk factors for poor outcomes after road traffic accidents, to generate new strategies that reduce secondary brain injury and improve outcomes. It will also examine emerging, non-invasive technologies that may be used to track brain physiology over time.

Figaji explained that from a more translational perspective, the team would examine genetic markers that may increase vulnerability to death and disability. “We aim to examine the genetic drivers of the extent of the injury, such as brain metabolism and inflammation; plasticity, which is how the brain repairs itself and adapts to change; and the chronic process that may be associated with long-term neurodegenerative disease. Finally, we will try to identify biomarkers from the brain and blood that help us better understand the mechanisms of brain injury, quantify the extent of brain damage, and predict outcomes for individuals.”

The body’s most complex organ

Studying TBI is an important component of the NI’s overall mission to increase understanding of the brain to prevent or mitigate diseases and conditions that damage the organ, while helping to promote brain health.

“The brain is the most complex organ in the human body, [reflecting] who we are as individual, conscious human beings ... Much of our understanding of how it works, historically, has come from cases over the centuries where the brain has been injured,” Figaji said.

“We hope that using more sophisticated tools in neuroscience, we will continue to learn more from the injured brain to improve how we treat the brain and how we protect it.”

When it comes to impacting policy, prevention of TBI is a critical strategy. Through this work, the researchers plan to highlight the role of prevention in road traffic accidents, assaults, falls, and inflicted injury in young children.

“We hope that this will improve infrastructure and protocols to treat head injury in hospitals across the country; appropriate treatment can more than halve the risk of death and disability from head trauma. And we hope that this raises the overall public awareness of protecting the brain – in sports and on our roads,” he said. 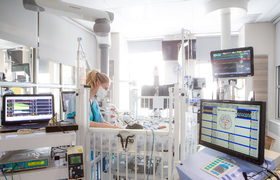 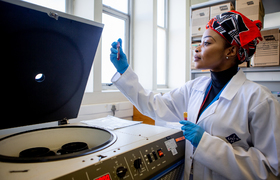