The University of Cape Town’s (UCT) Professor Kirsten Donald, who is based in the Department of Paediatrics and Child Health in the Faculty of Health Sciences (FHS), has been awarded a multimillion US dollar contract by Wellcome Leap to undertake cutting‑edge research into the emergence of brain networks underlying executive function (EF) development in early life. Professor Donald is the principal investigator, leading a team of scientists from eight universities as part of a multi‑project global study programme.

“How our brains develop in their first 1 000 days of life has an extraordinary impact on executive function throughout life,” said Donald, the deputy director of UCT’s Neuroscience Institute.

EF is the key parameter under investigation. Interacting in and with the world requires skills related to attention, memory and the integration of sensory perceptions with planning and executing activities and thoughts. During these early years, the brain alternately builds and prunes its developing networks in response to environmental influences.

Prenatally, the mother’s health and choices – including exposure to substance use – affect white and grey matter development in the brain of the growing foetus. A child’s postnatal nutrition influences the health of circuit formation; their physical exploration is key to development of sensorimotor skills; and their social interactions with caregivers are central to language and emotional development.

“The past decade has seen dramatic advances in our understanding of how the brain develops.”

“The past decade has seen dramatic advances in our understanding of how the brain develops, but we have barely scratched the surface,” said Donald.

“We know that children who’ve experienced setbacks in the first 1 000 days may be put at a severe disadvantage throughout their lives. If we could accurately predict factors impacting brain health, and windows for optimal intervention for children in these first years, we could offer them far better outcomes in terms of EF, language acquisition, socialisation and health.”

However, the tools and models that are required to predict the influence and dependency of these factors on individual network development are lacking. Without them, the key ingredients that are necessary for promoting healthy brain development cannot be optimised, and those at risk of lost potential cannot be identified. Timing is crucial because developmental windows are narrow.

Achieving the necessary outcomes requires bold thinking and breakthrough research. Recognising this, the Wellcome Trust’s seed‑funded Wellcome Leap supports innovative programmes, working at the intersection of the life sciences and engineering to deliver rapid breakthroughs in human health. The Wellcome Leap’s 1kD overarching programme goal is to measure and predict how the human brain develops in early life, what holds it back, and what can be done to give developing brains the opportunity to achieve their best potential.

Ten Leap-funded projects from around the world have been selected to conduct this research and development. Of these, three teams are responsible for undertaking observational studies of over 2 500 infants across eight infant cohorts. Considering the wide variation in environmental influences on brain health across regions and cultures, cohorts have been selected from six continents.

“We are proud of the contribution towards the successful submission by Prof Donald and her collaborators.”

A project of this scale is complex not only in its execution but also in the preparatory stages. Based at the FHS Faculty Research Office, Dr Rob Huddy, the project manager for proposal development, has been instrumental in behind‑the‑scenes work with Donald.

“Our research development team collated key information about the team as well as the resources and infrastructure available at each of the partner institutions, while also preparing the overall consortium budget.

“We are proud of the contribution towards the successful submission by Prof Donald and her collaborators and look forward to seeing the outcomes of the 1kD programme,” said Dr Huddy.

To conduct this research, Donald’s team will collect data from two sites in Africa: one in Cape Town and one in Blantyre, Malawi. This is the only project at Leap that will add prospectively collected brain imaging to its range of observational methods.

Interplay between the developing brain and influencing factors

“Ultimately, we want to give children across the world the best chance at flourishing in life,” said Donald. “And what we know is that the infant brain develops its neural networks in stages.”

During each of these stages, factors such as nutrition, sleep, parental attention and trauma influence how the growing brain builds and prunes these networks to best cope with its particular environment.

“We can start measuring nascent EF immediately, such as little children’s responses to faces, sounds and visual cues.”

Donald explained that once measurements of these structures are taken, they’ll be correlated with existing EF data.

“We can start measuring nascent EF immediately, such as little children’s responses to faces, sounds and visual cues. [These observations must be correlated] with signals of EF that will only become clearer later, such as language acquisition, pattern recognition, attention and social skills.”

“Eventually, we will have a map showing this interplay, stage by stage, that will guide future healthcare interventions to give children and their young brains the best chance to optimise their potential. The difference in these environments is a key factor in determining what kind of interventions are going to be important for children to help them cope and thrive in those environments.”

What’s key is not to compare children’s experience and outcomes between those contexts, but rather try to understand the common threads across different cultures, the different environments and the important context and culture‑specific processes that inform children thriving in a particular environment.

The international community is beginning to recognise the quality of research being published from studies on cohorts in Africa, and, in particular, the innovative techniques and research protocols that neuroscientists on the continent have developed to reach the young children and their families in these cohorts – while maintaining respect. The continent has much to offer in this arena, and much to gain.

The team is seeking to integrate multiple disciplines towards answering these questions.

“So, rather than being singularly focused on a particular methodology, this team has tapped into and is harmonising a range of skill sets involved in studying the microbiome, behaviour and sleep, and techniques such as electroencephalography (EEG), and high‑ and low‑field magnetic resonance imaging (MRI).

“The uniqueness of this group is that our goals are to bring that expertise in through a cohesive, integrated way when answering the [research] questions,” said Donald.

Collaboration with team members at each site will mean harnessing study findings for best practice and clinical care. This can offer guidance into early education and caregiving strategies to encourage optimal EF development within each community and culture‑specific context.

African neuroscience has been at a comparative disadvantage, lacking access to expensive infrastructure that is required to measure neurophysiological and neurobiological development in young children. These resources have traditionally sat outside the continent.

“However, here in Cape Town, we are privileged to have access to a fantastic resource – the Siemens Skyra 3T Scanner, a high‑field MRI facility housed at the Cape Universities Body Imaging Centre (CUBIC) at Groote Schuur [Hospital],” said Donald.

“While high‑field MRI and high‑density EEG are expensive and more challenging to perform, given the vulnerability of our young population, recent advances provide exciting new technologies, most notably the portable low‑field MRI scanner. Along with lower density EEG and other mobile tools, such as sleep wearables, we can reach more children less invasively, and closer to their home environment.”

“Being able to measure brain development and network evolution in under‑resourced settings, and at scale, promises to be a game‑changer for us.”

The recent development of the Hyperfine Mobile low‑field MRI Unit scanner means that instead of taking up a building and costing millions (like its high‑field cousin) this new technology is mobile and comes at a fraction of the cost.

Acknowledging possible concerns around the effectiveness of low‑resolution images, Donald noted: “Considering we are the designated team for collecting imaging data, we have been given the additional responsibility to test the Hyperfine unit’s imaging performance against the high‑resolution data captured on the high‑field MRI at CUBIC. We’ll double‑image a proportion of the Cape Town cohort and study the two datasets [Blantyre and Cape Town] to build a predictive model for the low‑field Hyperfine approach. Being able to measure brain development and network evolution in under‑resourced settings, and at scale, promises to be a game‑changer for us.”

Over the next six to 12 months, Donald’s team will recruit 300 infants in Gugulethu, an urban community in Cape Town, and a further 300 infants in Blantyre. Mothers will be recruited and assessed just before birth, and the children evaluated at three, six, 12, 24, and 36 months of age. This, for the EF measures to confirm predictive validity of the tools, as well as the influence of environmental measures at predicting EF outcomes.

“We are extraordinarily aware of the sensitivities surrounding such research [involving infants],” she said. “When investigating human brain development, we are naturally dealing with the very youngest and most vulnerable children, requiring that we take the utmost care to ensure that we do no harm.” 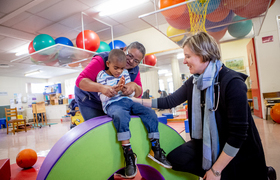 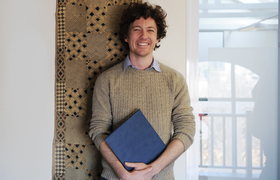 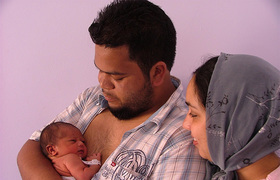