A collaborative teaching project developed by the University of Cape Town’s (UCT) Michaelis School of Fine Art and the Office for Inclusivity and Change (IOC) successfully proved the efficacy of socially responsive artworks in raising awareness of gender-based violence (GBV) among the campus community.

The temporary exhibition, created by fine art students on 2 October, investigated the intersection of public space and GBV through a specific focus on both audience participation and the use of craft-based techniques, illustrating a critical shift in what contemporary art can accomplish during public presentations.

Michaelis senior lecturer Fabian Saptouw said the students began developing the project working with 11 000 expired condoms donated by Lubrimaxxx. Following the initial proposal review period, some continued along this route while other groups opted to use alternative materials.

A crucial factor, he explained, was that the artworks were not intended as a static comment on GBV, but rather offered an opportunity for the viewers to contribute, so becoming collaborators and not only passive observers in the artistic intervention.

“Audience members were presented with various opportunities to share their personal interpretations of how GBV impacts the UCT community, one of which saw participants write comments on rectangles of red paper placed along the steps leading up to the Plaza,” said Saptouw.

“The comments ranged from expressions of anger and reflection on past experiences to calls to action and declarations like ‘Justice for Nene’, ‘Respect my existence or expect my resistance’ and ‘Gender-based violence is not a women’s issue, it’s a HUMAN issue’,” he added.

At the top of the stairs, viewers encountered a large stretch of purple fabric under the UCT #JustNo banner. The area behind the fabric was covered in soft furnishings and a group of students spoke to passers-by while music played softly in the background.

This project sought to create a safe space for womxn on campus and those who engaged with the students were offered a purple ribbon and an A5 page with journal prompts for self-reflection.

The audience was also prompted to respond in chalk to enigmatic figures rendered with condom fragments on black posters at the plaza as well as in various restrooms.

“The project made the viewers stop for a moment and re-evaluate their surroundings when prompted by the unexpected aesthetic encounter.”

Another group used more than 200 condoms to craft a quilt by sewing them together in a slow and labour-intensive process during which, Saptouw said, conversations around GBV “flowed with surprising ease”.

He commented that some viewers were initially averse to touching the quilt, as was the case with lengths of material braided from thousands of condoms.

Students recoiled in confusion when they touched the lubricated material as they exited the New Engineering Building, he said.

“Individuals approaching the door to the Main Library also stopped abruptly, stared at the braid with equal amounts of intrigue and bewilderment, and often elected to use an alternative entrance instead.

“The project made the viewers stop for a moment and re-evaluate their surroundings when prompted by the unexpected aesthetic encounter.” 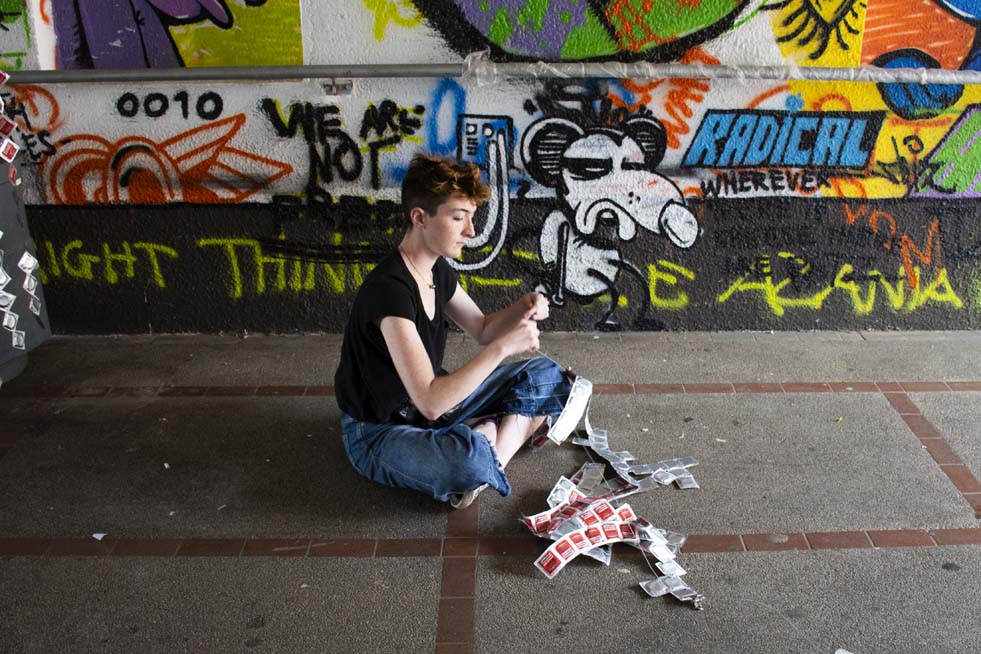 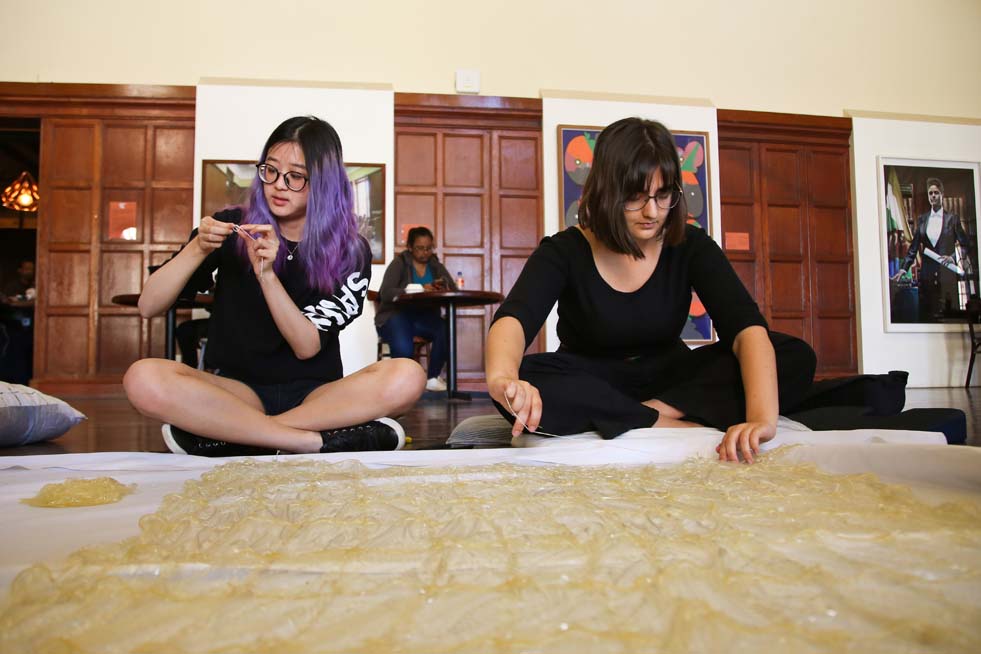 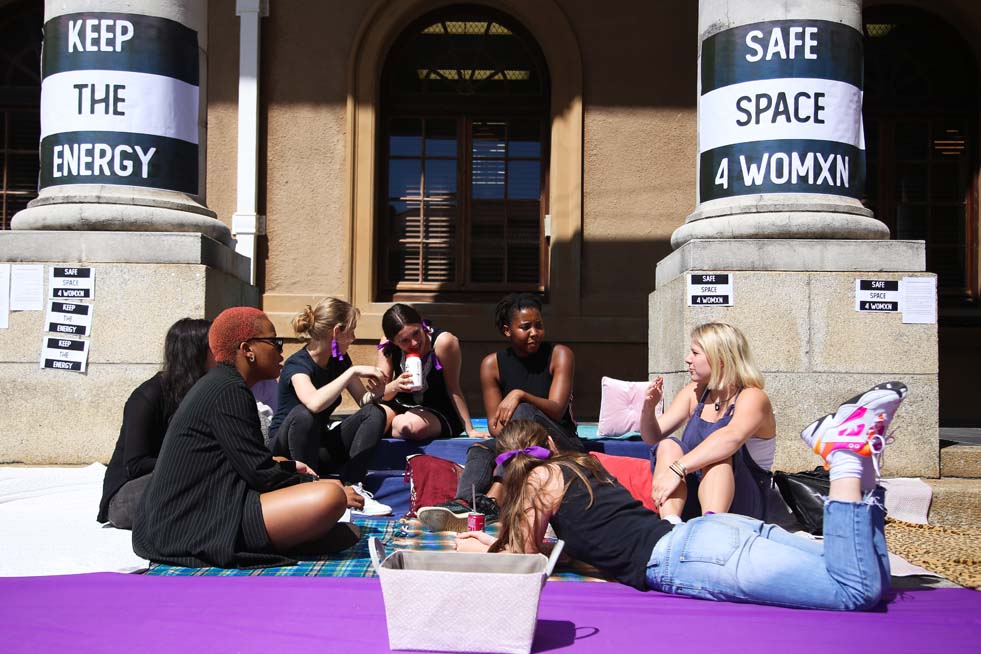 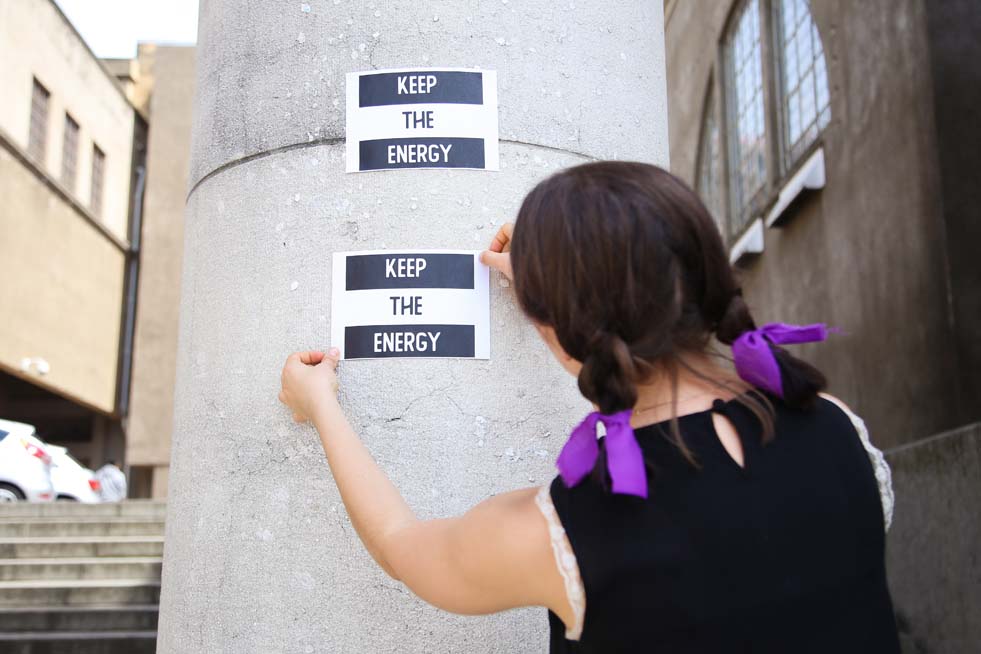 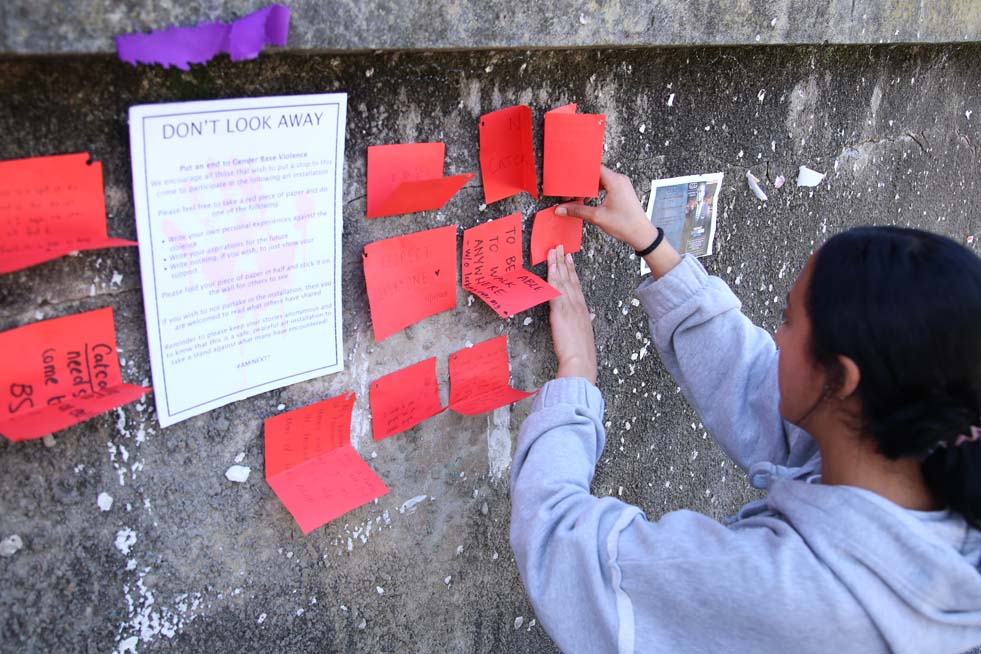 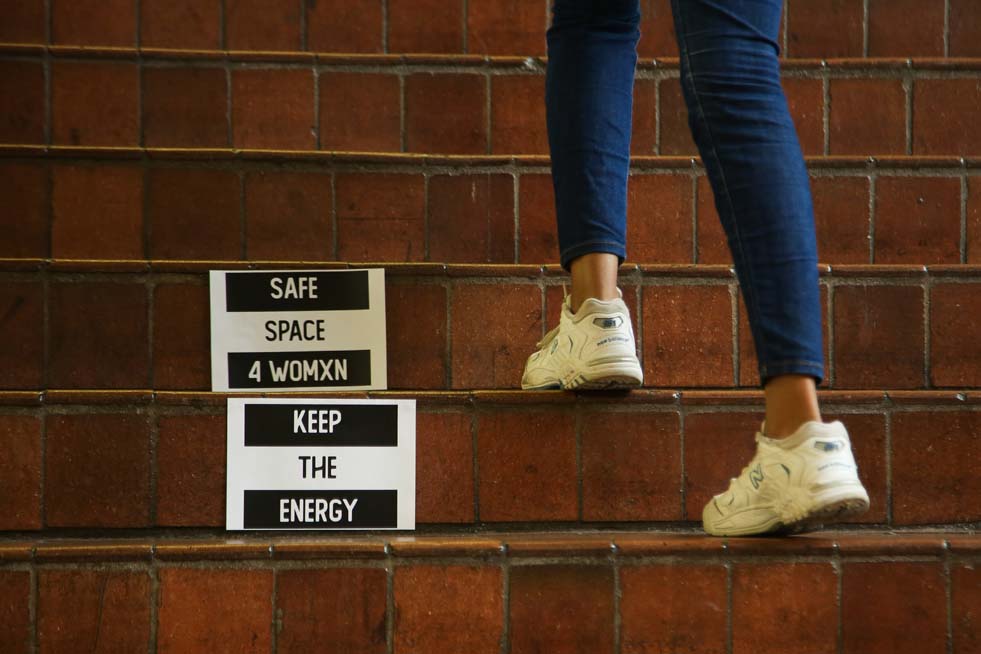 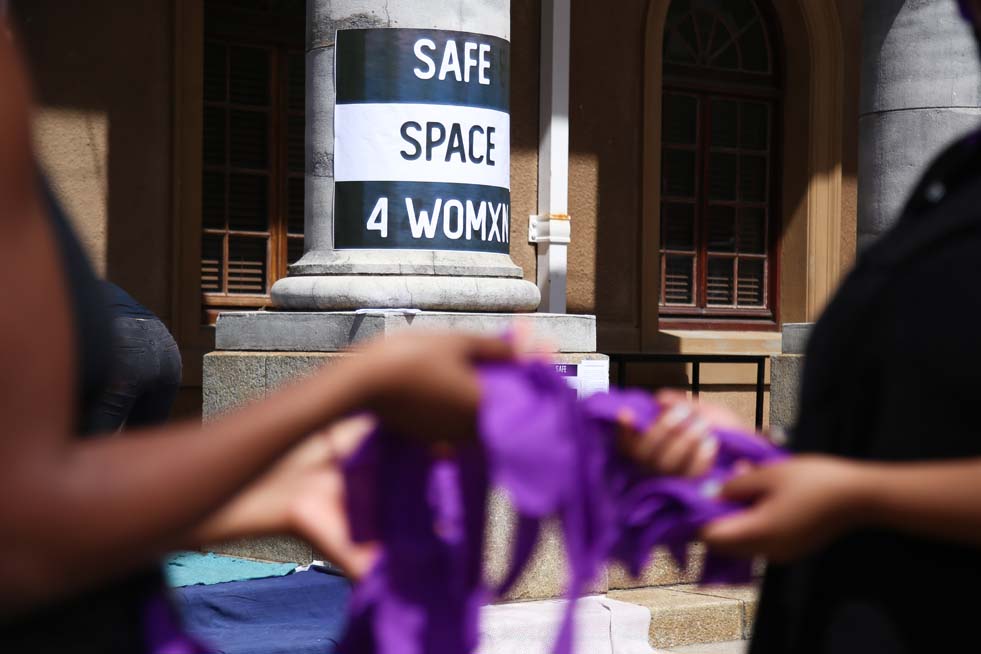 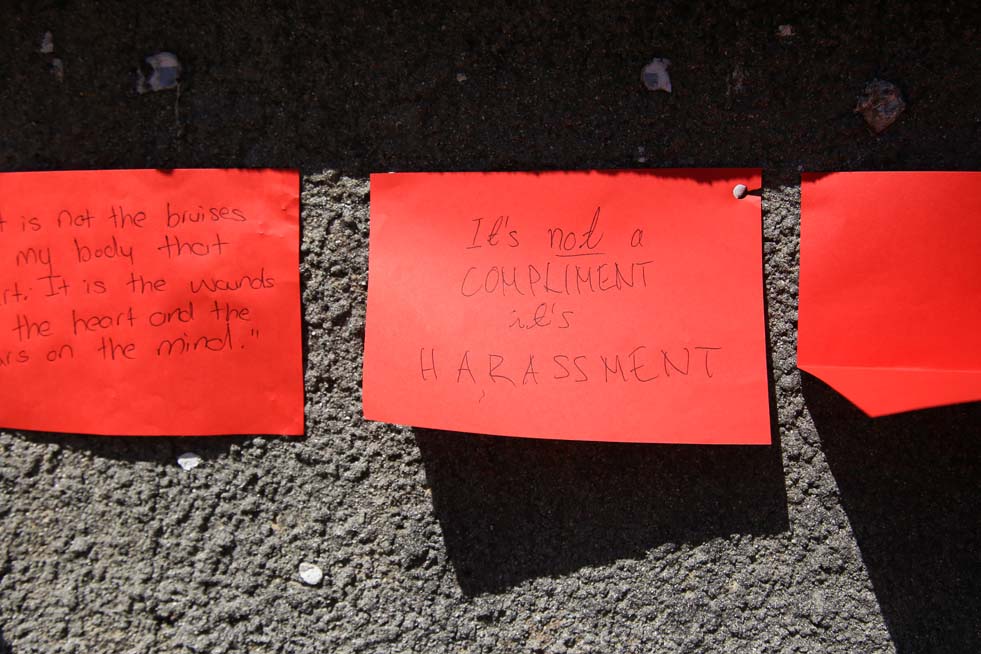 The temporary exhibition created by fine art students investigated the intersection of public space and GBV through a specific focus on both audience participation and the use of craft-based techniques.

Another project aimed at raising awareness about how members of the campus community physically navigate their space was the installation in the tunnel between middle and upper campus.

“Ephemeral barriers were draped from the ceiling of the structure and placed at regular intervals throughout the tunnel. Each student in the group primarily worked on one panel, thus the project acted as an abstract form of self-representation of their gendered experiences.

“Everyone who I observed encountering the work slowed down to view the exhibition,” Saptouw said.

Those emerging from the tunnel and heading for upper campus encountered a large white rectangular frame placed at eye level which included and excluded different parts of the academic environment. The aim was to focus on how GBV is framed depending on the circumstances of encounters with various institutional spaces and power structures.

Smaller frames were attached to noticeboards and the walls of a gender-neutral bathroom with a view to raising awareness around the invisibility and silencing experienced by many survivors.

Saptouw said the students had been very successful in engaging with their audience.

“The project is an excellent example of the value of socially responsive artworks as a strategy to raise awareness about the issues affecting our community.” 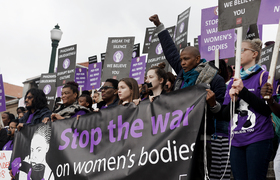