Appointment of DVC: Research and Internationalisation

It gives me great pleasure to inform you that Professor Sue Harrison has been appointed as the new Deputy Vice-Chancellor (DVC) for Research and Internationalisation with effect from 1 August 2019.

The appointment of Professor Harrison, who will coincidentally take over at the start of Women’s Month, means that all four executive leaders of the academic enterprise at the University of Cape Town (UCT) are women. This is a significant moment of transformation for women in academia and leadership positions, both in our society and across the world. We are delighted that the UCT Council has placed their confidence in the experience and expertise of each of my executive colleagues.

Professor Harrison takes over from Professor Kevin Naidoo, who has been acting in the position since the beginning of the year. We thank Professor Naidoo for the contribution he has made to the portfolio over this period.

While Professor Harrison will only officially commence in her new role in August, she will in the interim transition from her current role in the Department of Chemical Engineering at UCT between now and 31 July 2019.

Her work experience includes a three-year period in industrial research prior to her postgraduate studies and 28 years as an academic in the Department of Chemical Engineering at UCT. During her academic career, she progressed from her appointment as senior lecturer in 1991 to associate professor in 1997, receiving an ad hominem promotion to full professor in 2000. She moved through the phases of early career academic to head of department at the age of 35.

Professor Harrison was promoted to professorship during her time as head of department. She then chose a research-intensive phase over progressing directly to a higher leadership position to achieve her desired research standing. She was awarded the SARChI chair and established the globally recognised CeBER in 2001. Ten years later she was appointed as deputy dean of research and postgraduate studies in the Faculty of Engineering & the Built Environment and focused on the establishment of interdisciplinary research entities at UCT, including the Future Water research institute.

She received the Department of Science and Technology’s national award as Distinguished Woman Scientist in 2007 and the National Science and Technology Forum’s NSTF-South32 accolade for research and engineering capacity development in 2016. She is a fellow of UCT and the South African Academy of Engineering.

Among her responsibilities as deputy vice-chancellor will be to improve research quality, quantity and impact and to ensure that UCT maintains or improves its place as a research-intensive university as reflected in the international ranking of institutions. The appointment is for a period of five years, with the possibility of renewal based on performance. 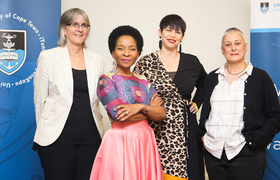