University of Cape Town (UCT) student leader and entrepreneur Sarina Mpharalala has been named the overall 2018 True Shine! award winner, taking home R10 000 which she plans to plough straight back into her business.

The commerce student walked off with top honours at the event in Johannesburg on 25 August. The awards were initiated in 2017 by Nonhlanhla Mdluli, founder of Every Girl has a Dream, to celebrate girls and young women making a difference in their communities.

Dedicating her win to her non-profit company Vhafumakadzi Takuwani, which works to empower women to rise in leadership and entrepreneurship, Mpharalala urged young women to never give up, no matter the hurdles.

“I was a fallen soul who made an immediate decision to rise after realising the time is now. There is an art in falling. We don’t fall to stay down; we fall to rise,” she said.

UCT News recently featured Mpharalala’s story of how she arrived at UCT as a first-year, full of confidence, but couldn’t cope with the transition to university life. She lost the scholarship she won as a top-performing high-school student.

But two years later Mpharalala is back on top, her journey an inspiration to others; she was this year named one of News24’s 100 young Mandelas of the future, in honour of the centenary of Nelson Mandela’s birth.

When she’s not studying, or running her company which she launched earlier this year, she is active in student leadership, including residential committees and the student chapter of the Businesswomen’s Association of South Africa and the Commerce Students’ Council, where she currently serves as secretary general.

Of her latest accolade, Mpharalala said it was an uplifting experience to meet the powerful women involved in the True Shine! awards. She also thanked UCT and her other corporate sponsors for their support.

“I have been inspired to work even harder, and I promise to break boundaries and pay it forward. Your investment in me will be worth it,” she said. 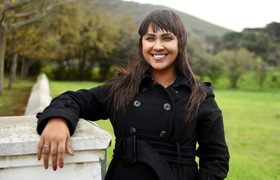