When Lwandile Mapuza graduated with his Bachelor of Business Science, he dedicated his degree to his mother. His story quickly went viral, with South Africans clamouring to help him continue his journey of learning.

Now, preparing to graduate with his BCom honours in taxation, Mapuza reflects on the journey to his graduation, and continues to pay tribute to the woman who valued her son’s education above all.

“From not believing that I even deserve a chance to study at UCT to graduating two times – words can’t fully capture how good it feels,” he says.

“Sometimes I do not believe that it is me graduating for the second time.”

Motivated by his mother

As a young man, Mapuza was not enthusiastic about his education.

“My mother is the main reason I even went past primary school,” he recalls. “All I wanted to do was play Mustapha, Mortal Kombat and Street Fighter .”

He recalls being absent from class for weeks: “I would wake up, take my 50 cent coins and go play games. That was my life.”

But his mother pushed him to take his schooling seriously.

“So, when I graduated, I wanted her to see that ʻall that effort you put in motivating me to go to school did not go to waste because, Mama, we made it!ʼ ”

“All that effort you put in motivating me to go to school did not go to waste because, Mama, we made it!”

Hailing from KwaXhaxhashimba village in Butterworth in the Eastern Cape, Mapuza has lived in Nyanga township in Cape Town since 1999.

He never imagined that he would attend university, let alone UCT.

“The level of motivation from township schools is not that high, in a sense that many of us do not see ourselves past matric and into universities.”

To make it to matric is the final goal, he says.

At Mapuza’s own high school, to mention even the idea of planning to study at UCT would have been like “Yamcha defeating Frieza in a fight – it is impossible”.

But he knew of another matriculant from Nyanga who was accepted to study at the Cape Peninsula University of Technology (CPUT). Hoping to follow suit, Mapuza applied to CPUT and was provisionally accepted. He passed his matric with flying colours, but when it came time to register, he did not have the funds available.

“By the time my school gave me money to register, something went wrong with my details there. So, I had to look for school elsewhere.”

Mapuza tried to register at the University of the Western Cape, to no avail. But seeing his exemplary matric results, one staff member encouraged Mapuza to apply to UCT.

“The journey to graduation is very painful,” Mapuza recounts. “I cannot speak for other students, but for me coming from a township school, everything is new to me.”

He remembers his first year of study, when he constantly questioned whether he belonged at UCT.

“I struggled a lot with computers, as we did not have them in my high school,” he says, which is one of the reasons he so hated the information systems course.

“I had to speak English every day. That was hard.”

He recalls a majority of white lecturers, which “made it even harder to even ask questions”. So he would hold onto his questions until the end of lectures and would only ask for clarity while his fellow students were leaving.

You can’t give up

“Going forward was a series of failed tests and courses,” he says. “I felt every time I failed a test, the course was telling me to go back home in Nyanga – but jonga ndinguMqadi [look at me, I am Mqadi] – so I had to fight.”

“The longer I studied at UCT, it was all about surviving,” he says.

Going from test results of 35%, Mapuza pushed until he was getting 84%.

“You can’t give up,” he maintains.

“You can’t give up . . . Keeping close ties with other hardworking people makes it easier.”

“Keeping close ties with other hardworking people makes it easier. I became a graduate at UCT because of all the people that helped me: from my mother motivating me to study, my primary school teachers, friends (we shared resources) and the lecturers.”

When Mapuza graduated with his Bachelor of Business Science, he posted to Facebook and Twitter, dedicating his degree to his mother.

Feeling berated, Mapuza disabled the application’s notifications after the first 100 or so retweets.

“All of a sudden, people were telling me that they saw my pictures on social media,” he recounts. He checked his Twitter account. His pictures were receiving thousands of likes and retweets. Soon, the same had happened on Facebook. “I was an overnight celeb.”

He began to receive messages from people hoping to help fund his continued studies.

“I had no idea where was this coming from . . . I ended up getting help from Bra Chuma Msamo. He came to Cape Town from Eastern Cape. He helped me a lot in covering my residence living expense. Sisi Noma-Afrika: I will never forget her too. She also helped me, and I ended up getting funding because of the people that helped share the posts.”

Investing in his future

Mapuza’s honours research investigated the zero-rating of basic food items. It asked if the practice is benefitting the poor.

“The research showed that zero-rating, for the most part, benefits mostly the rich consumers. Maize and brown bread is where poor consumers really benefit the most. It is a long discussion. I was shocked when they increase VAT and spoke about increases in social grants like that is going to help people,” he explains.

“I was really concerned about the poor consumers, as unlike personal income tax, VAT is not based on income. You just pay like everyone else at a standard rate.”

Moving forward, Mapuza is focused on doing well in his job.

“But in the near future, I would like to start my own company and invest in some land. I would like to build something for those that will come after me. I am thinking of doing a master’s in taxation soon.”

Mapuza will receive his honours degree in April 2018. Sadly, his mother is ill, and will not be able to attend his second graduation.

“I would love to have her there with me again, but now I just want to see her get better.” 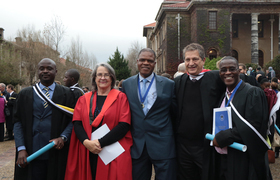 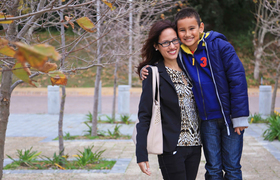 News
Success against the odds for LLB graduate 08 Jun 2016 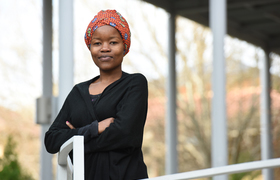