The current cohort of graduands experienced difficult times, which, has undoubtedly shaped who they are. So said Professor Mark New, UCT’s Pro Vice-Chancellor for Climate Change and director of the African Climate and Development Initiative. But he believes that change is for the better and hopes that it will encourage graduates to choose to become active members of society.

Addressing Faculty of Commerce and Faculty of Science graduands at the 10:00 graduation ceremony on 5 April, New said that UCT students and staff had endured especially challenging times in recent years.

“We have had internal debates, protests, disruptions, and often very polarised views between students, staff, parents and even friends,” he said.

That is not, he cautioned, to say that the challenges are over.

“You are graduating into interesting times – or should we say, challenging times,” said New, whose global contributions in leading climate research were recognised in March when he was awarded the Piers Sellers Prize for his lifelong contribution to climate solutions.

South Africa, he said, is experiencing a period of cautious hope with several trials ahead.

“We have a governance system that has been tried and tested, and maybe just about survived.

“We have an economy that is not offering people the right kind of work and, in my own area of research and teaching, we have a natural resource base – the one that supports us as individuals and communities, and supports our economy – that is under extreme stress. And it is on a trajectory to even greater stress in the future.”

Living beyond the Earth’s means

According to New, the water shortage in Cape Town is just one symptom of the enormous challenges we face.

Humans are using water in various water-stressed areas at rates that are unsustainable and which cause irreversible damage. We are living beyond the means provided by Earth by consuming bio-resources – that is, the living parts of the Earth – at a rate that is approximately two times the Earth’s ability to sustainably replenish them.

“We are burning fossil fuels at a rate that means we will have exceeded the available carbon budget that we have to avoid dangerous climate change in the next 15 years,” he said.

“And perhaps even worse,” he added, “[is that] most of the benefits, the short-term benefits of this credit facility, this natural credit facility that we are using, are accruing to a minority; that is, the small percentage of well-off people in global society and in South Africa.”

The point, stressed New, is that the social, economic and political system that graduands “are graduating into is creaking”. Moreover, it is locking us into an uncomfortable, unequal and probably unsustainable future, which, if we do nothing, will crumble.

He believes that it’s crucial, for several reasons, for graduands to carefully consider the role they can play in this regard.

“Your studies have given you the knowledge and perhaps the tools to be productive in and benefit economically from this creaking system,” he said.

“But I hope that they have also given you the capabilities of being critical of the system. And through that critical engagement of the system, to work to change the system or the parts of the system where you are situated for the better and for the future.”

“Your studies have given you the knowledge and perhaps the tools to be productive in and benefit economically … I hope that they have also given you the capabilities of being critical of the system.”

During his speech, he apologised to graduands on behalf of members of his generation who, he said, failed to effectively recognise the flaws in the system and make the necessary changes.

But do beneficiaries of higher education have an added responsibility to society? Are they obliged to fix the creaky system that was maintained by their predecessors?

“I think, individually, it’s up to each of us to choose whether to be passive or active in society and to choose where and how we are active – at work, as leaders, as community workers, in small ways and large ways, in few ways and in many ways,” said New.

“When we look in the mirror of our lives…we want to not regret the moments that we should have been active rather than passive.”

Using some topical examples, he encouraged graduands to rather be the fictitious (former Australian cricket captain) Steve Smith who said no to using sandpaper on a cricket ball than the real one who passively let it happen. He suggested they rather be the KPMG accountant who blew the whistle on a corrupt or unethical contract than the one who passively let it happen, and the mathematician or statistician who mined data for drug discovery instead of the one who mined data for Cambridge Analytica for political ends.

“The choices you make are critical for the future and whether you decide to be passive or active tells us a lot about you as an individual and what society will look like in the future,” said New.

He concluded his speech by encouraging graduands with a quote he finds inspiring and has drawn on when passivity has raised its head in his life: “It works in many contexts – large or small, personal or institutional, family or business – and the quote is this, ‘Be the leader you’ve been waiting for.’ ” 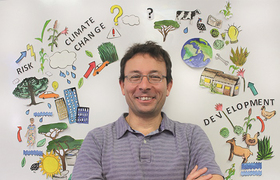