Jake White gets his Ikey stripes 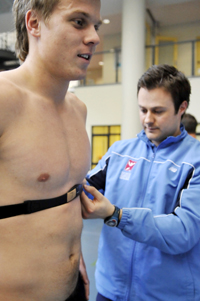 UCT head coach John Dobson has enlisted the help of some high-profile coaches and sports scientists as the Ikey Tigers attempt to go one better in next year's FNB Varsity Cup tournament.

The Ikeys topped the log after an exciting inaugural Varsity Cup league campaign, before beating Pukke in a drama-filled semifinal encounter and then going down in injury-time to the Maties in a pulsating final in April.

Dobson, however, is refusing to rest on his laurels and, along with assistant coach Robbie Fleck (who continues to look after the UCT backline), World Cup winners Jake White and Bob Skinstad have joined the Ikey Tigers management team as technical advisors for the 2009 Varsity Cup.

"It's great news having Jake and Bob involved with us next year," said Dobson.

"Bob will initially start working with the loose forwards, but he won't be limited to that alone, while Jake will look to help us as much as possible, given his commitments with Saracens.

"It goes without saying that Jake and Bob have plenty of experience and they're used to winning, but the nice thing is that they will add something different with their amazing intellectual capital."

Dobson, the man credited with turning UCT rugby around, continued: "We don't have money like the other universities to contract coaches or players, and we don't have a rugby academy at UCT either.

"However, in involving Jake, Bob and others we're trying to give the players an education in rugby - a high-level rugby MBA, in a sense.

"We need to attract players to the club, and hopefully an opportunity of working with some of the biggest names in world rugby and exposure to this intellectual property will benefit us, and the players, in more ways than one. We are a nursery - we have produced the most Springboks after Stellenbosch - and we would like talented young thinking players to seriously consider UCT.

"Someone like Selborne is among the best line-out coaches in the world, and we all know Fleckie's value as a backline coach. This might be a big management team, but we've assembled a coaching staff that we think will truly add value to UCT and the FNB Varsity Cup."

Away from the training field, UCT will also have the support of the Sports Science Institute of South Africa, with renowned sports scientist Professor Tim Noakes lending his considerable intellectual weight to the Ikeys' Varsity Cup campaign, along with regular first-team biokineticist Tiaan Campher, who will once again whip the players into shape.

"The difference between winning and losing is a small margin," said Noakes. "Our aim is to help John and his players realise this in 2009.

"John has assembled a very talented young squad and I have no doubt they will go on to achieve many great things. The Sports Science Institute of South Africa will be available for the players to use, for fitness and testing, and hopefully we can help turn this talented team into a trophy-winning side."

While the Ikey Tigers shocked both friend and foe with their unique brand of winning rugby in 2008, Dobson is fully aware of the so-called 'second season syndrome', never mind the fact that he will also have to make do without some of his key men from this past season.

Wing Mat Turner is now playing professionally in England, game-breaking flank Kyle Brown has just been called up to the SA Sevens squad and prop Herbie Mayosi is no longer eligible for the Varsity Cup. Also, a host of other players could be involved with Western Province at Vodacom Cup level next year.

"I guess we're becoming victims of our own success," said Dobson with a wry smile. "A lot of our players have been signed up by bigger and wealthier institutions, but we have to accept that as being part of our vision: to produce new players.

"I would love to have kept last year's team together, but the fact that so many have been snapped up is a testament to our success. But those setbacks aside, Robbie and I have spoken at length about how we can rebuild our squad and once again create a stir with our unique brand of rugby."