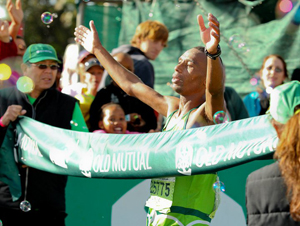 Ntshiliza finished the race - dominated by international runners in recent years - on the UCT sports fields in a time of 3:08:31, a mere 18 seconds ahead of Motlhokoa Nkhabutlane of Lesotho, whom he'd overtaken over the last kilometre. More good news was that four South Africans finished in the top 10, making amends for the solitary gold medal won in 2010.

As expected, Russian twins Olesya and Elena Nurgalieva ran the show in the women's race, Olesya winning in 3:33:58, just over four minutes ahead of her sister. Olesya has won three of the last four Two Oceans Ultras, losing to her sibling only in 2009.

This year, 13 runners in UCT colours completed the ultra. Will Robinson was the first in, clocking 3:44:04. Dr Andrzej 'AO' Okreglicki of the Division of Cardiology ran his 10th consecutive Two Oceans Ultra. Jennifer Kithinji, the only UCT woman to do the ultra, completed her race in a respectable 5:54.28.

In the half marathon, which boasted 11 124 finishers (by cut-off) this year, the UCT Athletics Club finished second in the women's team event. The UCT women, former winners, were pipped by the professional team from the Nedbank Central Gauteng Running Club, which included defending champion Rene Kalmer.

The UCT men's team came third in the half-marathon category. Nelson Bass, the first UCT runner, was 19th overall. The race was also Bass' 10th half.