Hockey women off to a bright start 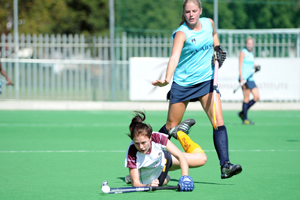 Falling on hard times: UCT's Gina Sole (in blue) looks to pick up a loose ball as Vics' Kara Scheepers goes to ground.

Perhaps it wasn't the most polished performance, but the UCT women's first team got their season off on the right foot, beating Victorians 3-1 in their Western Province Hockey Union (WPHU) Grand Challenge match in Stellenbosch on Saturday, 16 April.

It was jittery stuff for both sides, but it was UCT - who had a bye in the opening clashes the weekend before - who took advantage of their opportunities, leading 2-0 at half time. Vics (the Stellenbosch second team) pulled one back, but UCT added a third goal to restore their two-goal advantage.

The win encouraged UCT coach, Matthew McConkey, who had to field a very young team on the day. Out with injuries were two of his key players, Amy Freakes and Robyn Tully, both national junior players.

McConkey's also delighted with the five or six young players he's recruited for his squad this year. Most of them, he reports, have represented their home provinces.

"It's quite nice, for once, to get good youngsters in."

That bodes well for the team's plans to finish in the top four of the Grand Challenge, after having to settle for eighth spot in 2010.

Similarly, the men, 2010 Grand Challenge champions, enjoyed a winning start to their season. Playing on the same field in Stellenbosch later that evening, UCT beat Victorians by 4-2.