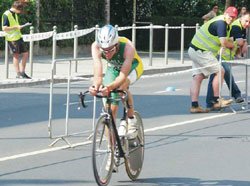 On foot and wheel: Will Robinson won a silver medal at the duathlon world championships in Hungary.

One of UCT's most successful cyclists, Will Robinson has now made his mark at his first overseas event

UCT's Will Robinson has just returned from Gy?r, Hungary, where he won a silver medal at the 2007 ITU Duathlon World Championships.

Out of a record number of 852 participants from 32 countries, Robinson finished in second place in the 25-29 age category, and 15th overall in the age-group (18-44) event. He also recorded the second-fastest cycling leg of the age-group race.

Not bad at all, considering it was Robinson's first time racing abroad.

"I was especially pleased with my cycle," he says. In this leg of the run-cycle-run race, Robinson was snapping at the heels of winner RenÃ© HÃ¶rdeman of Germany, finishing in 01:40:34. (HÃ¶rdeman broke the tape in 01:38:29.)

"On the bike I'm competitive with the best duathletes in the world," says Robinson. And for someone who's been dubbed 'Willpower' by his acsis UCT cycle team, this comes as no surprise.

"Winning a medal was a dream come true."

At time of print, Robinson would've just returned from the South African Road Cycling Championships, which took place in Bloemfontein from 31 May to 3 June. DANIELLA POLLOCK