Reflecting on the devastating UCT fire

Two months after a devastating wildfire ripped through parts of the University of Cape Town’s (UCT) upper campus, a massive restoration project to rebuild the gutted iconic UCT buildings is in full swing.

On Sunday, 18 April, a runaway fire destroyed the Jagger Reading Room and caused damage in Upper Campus Residence (interim name), Fuller Hall residence, the HW Pearson building, as well as Cadboll House and La Grotta. Thousands of students were evacuated from their residences and placed in temporary accommodation sites across the city. In response, the university executive suspended the academic programme for a week.

Reflecting on the devastation, UCT News spoke to the Department of Biological Sciences’ Emeritus Professor William Bond. We asked him for his take on the fire and posed other fundamental questions.

Niémah Davids (ND): Typically, explain to us how fires spread.

William Bond (WB): For veld fires to spread rapidly, you normally need spatially continuous fuels. Percolation theory has been applied to the manner in which fires spread, and it likens fire to a fluid moving through a porous (flammable) medium, which in this case is the fuel. If the medium is not very porous, the fire will stop burning, but that depends on the fuel’s spatial pattern.

“Veld fires that cross over into urban areas have been quite rare in the Cape until recently.”

ND: What made the ‘UCT fire’ different?

WB: Well, the ‘UCT fire’ spread from grassveld and fynbos across the urban divide. This is more commonly known as the Wildland Urban Interface (WUI). Veld fires that cross over into urban areas have been quite rare in the Cape until recently.

These types of fires have become a major threat to people and property in many cities across the world. I saw the aftermath of the devastating California fires in 2018, which had wreaked havoc, gutting towns and suburbs. The spread of this fire was quite erratic: some houses burned to the ground, while neighbouring homes remained untouched. It just leapt from house to house without even touching the vegetation in between. So, the fire had spread even though the ‘fuel’ was not continuous at all.

“That means a fire could jump from Stellenbosch to Table Mountain without burning anything in between.”

This was [exactly] like the ‘UCT fire’. It leapt across concrete, tar roads [and] brick pathways where there was nothing to burn. In my view, the spread of this fire is thought to be as a result of flaming embers driven by hot, dry, gusty winds. When embers set fires alight in front of a fire line, that process is known as spotting. Spotting is notorious in Australian fires in eucalypt-dominated ecosystems, and in some pine-dominated ecosystems in North America. In Australia, bark of some eucalypts curls up as glowing embers, and, blown by the wind, they ignite fires as far as 30 km (the record is more than 45 km) ahead of the original fire line. That means a fire could jump from Stellenbosch to Table Mountain without burning anything in between.

ND: Can anything be done to stop wildfires from spreading so rapidly?

WB: Wildfires are an entirely natural feature of many flammable ecosystems. They are bound to happen, and many forms of life require them to complete their life cycles.

The severity of a fire can, to some extent, be managed by reducing the biomass of flammable vegetation. Pine plantations, eucalypts and invasive woody plants, such as Australian acacias, have a great deal more flammable biomass than native fynbos, and they result in more severe fires. Removing the understory of pine planation and preventing excessive build-up of leaf litter in general is a good place to start.

“We need to do a lot more research on which trees produce embers that become airborne.”

The big unknown is spotting by ember fires. We need to conduct a lot more research on which trees produce embers that become airborne. While we know that some eucalypt species are very dangerous, very little research has been conducted on this topic in South Africa and elsewhere around the world. I am reluctant to see trees such as the stone pine removed because we assume that they create embers, without testing whether they do first.

ND: What are some of the worst tree ember traps at UCT and how do we ember-proof areas?

A thorough survey of post-fire damage and exactly which plants ignited still needs to be conducted.

Ember-proofing any area, according to California guidelines, requires removal of flammable plants up to 7 m from a building, as well as overhanging branches, if necessary. Checking and cleaning gutters and roofing for debris is important too. Very useful pamphlets to ‘firescape’ your property are available from Working on Fire and Fire Wise, and this information needs to be made more widely available to those with properties close to the urban edge.

“With global warming, these types of catastrophic fires are likely to increase worldwide.”

ND: Is there anything else you’d like to add?

WB: With global warming, these types of catastrophic fires are likely to increase worldwide. More frequent days with extreme weather conditions will make them more common. High temperatures, low humidity, gusty and high winds and dry fuels are the key ingredients. All cities with flammable ecosystems, especially those dominated by woody vegetation, are at risk. I must stress that these fires are an entirely natural feature of many flammable ecosystems. They are bound to happen and, indeed, biologists welcome them because many forms of life require them to complete their life cycles. 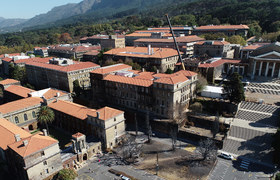