Mop-up operations are under way at the University of Cape Town (UCT), after a large-scale wildfire destroyed several historical buildings on UCT’s upper campus on Sunday, 18 April.

In light of this, the university’s vice-chancellor, Professor Mamokgethi Phakeng, announced that all academic activities would be suspended until 23 April. No classes, tutorials, laboratory work or tests will take place for the next four days.

The fire is believed to have started on the slopes of Devil’s Peak on Sunday. It quickly spread to Rhodes Memorial before rapidly reaching UCT’s upper campus in Rondebosch. The extent of the damage to the affected UCT buildings is still unknown.

“One of the buildings gutted by the runaway fire was the Jagger Reading Room, which forms part of the UCT Libraries’ Special Collections.”

One of the buildings gutted by the runaway fire was the Jagger Reading Room, which forms part of the UCT Libraries’ Special Collections.

The Jagger Reading Room (previously the JW Jagger Library) was constructed in the 1930s and was named after one of UCT Libraries’ main benefactors. Initially, the building served as the university’s main library, and later as a short-loans centre, before officially becoming the African Studies Library’s reading room.

About 4 000 students were evacuated from residences on Sunday and placed at temporary accommodation sites across the city.

Humanitarian organisation Gift of the Givers has come on board to prepare students’ meals from Old Mutual’s offices in Pinelands. Once meals have been prepared, they are distributed to the various accommodation sites. The necessary arrangements have also been made to cater for Muslim students, who are observing the month of Ramadan.

“The UCT community extends its sincerest gratitude to members of the public for their generous donations.”

If you wish to contribute, please drop off essential items such as toiletries, clothes and food at the Old Mutual West Campus, 91 Jan Smuts Road, Pinelands, Cape Town. Alternatively, the institution has also set up a relief fund and welcomes all monetary donations.

The UCT community extends its sincerest gratitude to members of the public for their generous donations. 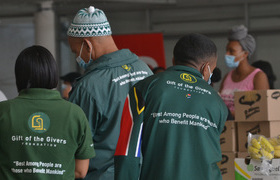