Gift of the Givers on the ground to help UCT

Gift of the Givers, Africa’s largest disaster response non-governmental organisation, was on the ground on Monday, 19 April, to continue its efforts to assist the University of Cape Town (UCT) and students following the devastation caused by the fires that began on Sunday morning.

The organisation became involved once the university had evacuated students from residences near its main campus. Gift of the Givers project manager, Ali Sablay, said that a request had been made for the organisation’s help to feed 4 000 students.

They immediately swung into action on Sunday, 18 April, and finished feeding students at 01:40 on Monday morning. Operations resumed later on Monday morning at the Old Mutual West Campus in Pinelands. Sablay noted that Old Mutual had offered their facility free of charge and was willing to assist despite the short notice.

Regarding the request from the university for further assistance, Gift of the Givers will continue feeding students three meals daily for the next seven days and will work with the UCT Council to assess the situation thereafter.

Many corporations have come on board, eager to help and ensure that students are as comfortable as possible. Gift of the Givers is coordinating donations from the likes of Shoprite, The Foschini Group, Nestlé, Engen and vida e caffè.

Individuals have also been quick and eager to assist. Sablay said that as soon as the news broke that Gift of the Givers would be feeding students, their office was surrounded by cars and volunteers.

“The spirit of ubuntu is overflowing.”

One such volunteer was a resident from Khayelitsha who had lost all his belongings in two fires. The man said that although he couldn’t provide accommodation and was unable to make a donation, he wanted to help in whatever way possible, including offloading trucks and distributing food to students.

“The spirit of ubuntu is overflowing,” said Sablay.

He added that there is a need for hygiene packs for students, particularly sanitary pads. Those wanting to donate non-perishable food and other items may drop them at Old Mutual. Sablay also advised that South Africans keep track of the organisation’s social media feeds for further updates.

Professor Adam Haupt, the director of UCT’s Centre for Film and Media Studies, was also at the drop-off and distribution point on Monday morning. After hearing that there was a need for additional transportation, he volunteered to pick up and drop off donations.

Professor Haupt provided further context: “The students who are in residence, in the context of COVID-19, are [there] precisely because they cannot work from home due to various circumstances.”

These circumstances include and speak to South Africa’s racialised inequality, the digital divide, and various other class and social factors. That the fire has happened during a pandemic makes the situation much more difficult for students.

Haupt advised that those who can physically help should do so, but must remain wary of exposing themselves and their families to COVID-19. And for those who cannot help in person, there are other options, such as donating to the #UCTFire emergency relief fund or Gift of the Givers.

‘We are your family’

Many UCT students and their families were also at the drop-off and distribution centre, including final-year BA student and Golden Key fundraising director Demi-Lin Duncan. She had been hiking in Newlands Forest when the fire began, but luckily made it to safety in time.

After the university announced that academic activities would be suspended, Duncan decided that the best use of her time would be to help fellow students. She added that the response from residents has been heart-warming, and that despite the restrictions of the pandemic, people are eager to help.

Duncan also shared a message to fellow students who have been directly affected: “We are all here to help you. Reach out to your friends and family, message tutors and lecturers … We are your family.”

Members of the public who would like to donate essential items can drop them off at Old Mutual West Campus, 91 Jan Smuts Road, Pinelands, between 06:00 and 23:00. 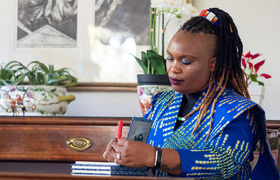