The University of Cape Town Yacht Club (UCTYC) was able to defend its title against the University of Stellenbosch, lifting the Pike Trophy at the 2018 University Sports South Africa (USSA) Sailing Regatta.

In the individual team rankings, UCT had an assertive showing with its three teams (UCT A, UCT B and UCT C) finishing first, second and third respectively.

Half of UCTYC’s three teams were women, with students ranging from first-years all the way to those completing their master’s degrees, with representation from across the faculties.

Adding to the team’s winnings, UCT’s Nicola Burger was awarded the USSA Sailing Ladiesʼ Trophy for the best female sailor. This followed a spectacular match in which she was able to get seven penalties on the opposing team.

However, the regatta, which was held under the auspices of NUSA Sailing at Theewaterskloof Dam from 2 to 7 December, wasn’t all smooth sailing – even for UCTYC. Moments during the regatta saw sailors facing winds in excess of 30 knots. But UCTYC persevered, successfully completing the regatta with a total of 33 matches sailed.

Along the way, there were some fiercely competitive matches between the universities. Newcomers Durban University of Technology quickly adapted to the format of team racing and Rhodes University – previously having struggled to make it out of the pool stages – showed some dominating sailing. Also participating were teams from the University of KwaZulu-Natal and the University of the Witwatersrand.

In total, there were over 60 sailors who participated, making this one of the largest attendances to date. This indicates growing momentum and development of university sailing, according to UCTYC.

“In the end, it remains our pleasure to thank all the sailors, universities, umpires, managers and coaches who made it to the regatta and hope that we see them all again in 2019,” said UCTYC. 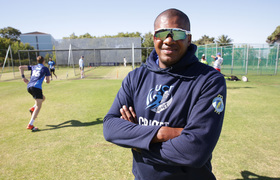