End of an era for Mamabolo

Anyone who’s been involved with sport at the University of Cape Town (UCT) over the past 20 years needs no introduction to senior sports coordinator Frans Mamabolo. Passionate about all types of sport, he’s been a regular fixture at the courts and next to the fields over the years as he's gone about his job in Sports and Recreation.

Sadly, Mamabolo’s time at UCT has come to an end. But exciting things lie ahead as he sets off to Rhodes University to take up the position of Head of Sports at that institution.

After completing a degree in social work at UCT, followed by a postgraduate diploma in human resources, he applied for an internship in the Sports and Recreation Department, stepping into the Sports Centre on 1 January 1999 as an employee of his alma mater.

He believes that his involvement with the UCT Karate Club as a student played an integral role in his successful application. He approached his new job with the same dedication he had given to his karate, and soon moved up the ranks, taking on the position of senior sports administrator exactly one year later.

“I always tell my students: You don’t need a specific degree to be a sports administrator, but you need passion for sports,” said Mamabolo.

“If you don’t have that, you’re going to struggle.”

Testament to this, Mamabolo would often be found doing his rounds at the Sports Centre and the various courts and fields over weekends.

“People often say, ʻYou work seven days a week; what’s wrong with you?ʼ But you know what? It’s not like I’m working. I’m going there to enjoy myself!”

Although he no longer participates in the martial art, karate is still at the top of his list of favourite sports to watch, followed closely by basketball – in spite of the fact that heʼs never played it.

“I just enjoy watching it,” he laughed.

“I always tell my students: You don’t need a specific degree to be a sports administrator, but you need passion for sports.”

“I think UCT Sport built me to where I am today. The opportunities that were given to us as sports administrators by management were really amazing.”

One of the biggest advantages has been the opportunity to travel. Since taking his first international trip to Thailand for the World Student Games in 2007, Mamabolo has visited every continent on the planet.

“The most interesting place I visited was Siberia in Russia – I took the national chess team there,” he recalled.

“We went there in February and the temperature was something like -30 degrees, snowy, iced. Just imagine – a bunch of South Africans going there, wearing normal shoes. We were slipping all over.”

Another memorable trip was a 36-hour bus ride from Pretoria to Zambia, which he hopes never to repeat.

Other destinations include Serbia, Montenegro, Madagascar, Australia, the United States and, most recently, Japan.

The pinboard in his office is covered with ID cards from a wide array of global events, which serve as daily reminders of all the places sport has taken him over the years.

While the prospect of starting something fresh and new in Grahamstown is exciting, Mamabolo’s farewell to UCT comes with a tinge of sadness.

Apart from initially having to leave his wife and daughter in Cape Town, he will also be saying goodbye to a network of well-loved colleagues across the university. Having served on many committees, as well as the Senate and as the employeesʼ union executive, there’s no doubt that he has left a mark.

He’s also served as warden at University House Residence since 2013, and says that he’s going to miss “my boys” there most of all.

Over the years, Mamabolo has made some special connections with students who have played sport at UCT. He recalled, for instance, the expressions on the faces of two students who had never flown before and were about to set off on their first trip to participate in an event overseas.

Both had come from impoverished backgrounds and were about to have a life-changing experience.

Mamabolo feels well-prepared for the new challenges awaiting him at Rhodes University in 2019.

He explained that in recent years, many Rhodes teams have not been performing to their full potential and have missed out on being included in national tournaments.

In many ways, his job will be to build sports up from the ground again, and set a new standard for the university.

“That’s what excites me – whether I leave Rhodes after five years or 10 years, I’ll be able to say, I built that.” 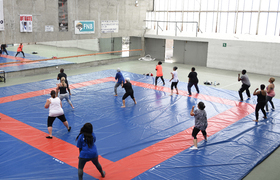