University of Cape Town Vice-Chancellor Professor Mamokgethi Phakeng has renewed the university’s commitment to nurturing relationships with high schools, by meeting this week with principals and stakeholders from across the metropole.

During an interactive engagement at Oude Molen Academy of Science and Technology on 16 October, Phakeng shared her vision for UCT’s future, and invited principals and stakeholders to continue participating in open dialogue with the university.

Acknowledging that with the fourth term having begun, and matrics gearing up for final exams, the meeting may have come a little late in the year, she expressed her hope that it would be only the first of many such engagements during her term of office.

Since taking up the VC post, Phakeng has been active in nurturing links between UCT and local communities during her engagements, appearances and addresses. At this week’s meeting with principals, she again emphasised that the university cannot exist in isolation, and that building community on and off campus is of the utmost importance.

“As a university, we don’t exist on our own. We don’t just take students – they come from elsewhere. They exist in a community and we as a university are also part of a community.

“You should see UCT as an extension of your school,” she told the principals.

During his introduction, UCT Registrar Royston Pillay also underscored the fact that schools and universities have a responsibility to work together for the greater good.

“We prize highly the opportunity to continue to work with you and to make our collective contribution towards building our South African society.”

“We prize highly the opportunity to continue to work with you and to make our collective contribution towards building our South African society,” he said.

“Because that is ultimately what this is about.”

The importance of activism

Reflecting on the tumultuous journey that higher education has taken since #RhodesMustFall and #FeesMustFall in 2015, Phakeng came out in strong support of mindful student activism that does not negatively impact the rights of others.

“We believe that activism is important because it’s very easy for us to get too comfortable and not to consider difficult questions.”

She noted that the portrayal of the action on campuses on television and in newspapers may have seemed terrifying to parents and teachers over the past few years, but cautioned that not everything should be taken at face value.

“Sometimes, when we have student struggles happening at universities, all of us get nervous, and we think everything is falling apart.

Emphasising that while UCT’s leadership doesn’t necessarily condone all the ways in which students have advanced their struggle, Phakeng said that the questions at the heart of the resistance are what is important.

A place of ideas

With student protests focused on the question of transformation, and on how after 20 years of democracy many still feel a sense of alienation on campus and in their curricula, the action calls into question not only the past, but also what the future should look like. This offers the leadership an opportunity to revisit the very reasons why the university exists.

“We’ve decided to reclaim the university as a place of ideas, a place where ideas grow and are encouraged; where ideas sharpen one another, and are not silenced but are instead allowed to exist,” she said.

Phakeng encouraged principals to communicate this to their learners, and to emphasise that the luxury of having their ideas honed by the sometimes contradictory ideas of others is a luxury that doesn’t exist in many places outside the academic space.

Allowing ideas to flow freely, she added, is key to building a university that is truly inclusive, engaged and research-intensive.

Supporting this vision for UCT’s future are the three pillars Phakeng has been driving since taking office – excellence, transformation and sustainability.

Achieving true transformation goes beyond equity of access, which the university has successfully implemented over the past decade by increasing the number of black students and staff on campus, she pointed out.

Ultimately, Phakeng hopes to communicate to new recruits from schools across the metropole, the province, the country and the continent that success has many different faces, and that UCT would like to be a space in which every individual can thrive.

“We want to say to them: we give you the space to come here and shape it into being the best university in the world… by being who you are, not necessarily by assimilating. Because it’s the diversity that we bring that’s going to make our university the best in the world,” she said. 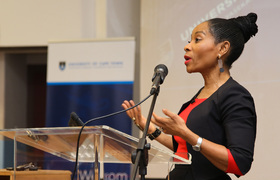 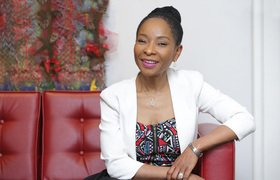