UCT Libraries has embraced the university’s water-saving campaign by installing metered bathroom taps with adjustable low flow, encouraging staff to bring their own water to work and turning off their instant-boiling-water systems, starting with the libraries directorate.

The UCT Libraries team worked with Properties and Services to change the bathroom fittings, and metered taps will be rolled out at branch libraries too. They also appointed Glynnis Johnson, a member of UCT Libraries’ Marketing and Communications Committee, as their water champion – one of the many who have been chosen to lead departmental efforts in saving water.

“At UCT Libraries we work from the premise that every single staff member is doing their best to save water and we are committed to continuing our mission of remaining ‘Water-wise Libraries’,” says Johnson.

The team met earlier this month to draw up an action plan for their water-wise campaign. The Marketing and Communications Committee will implement the campaign together with library staff volunteers.

To endorse their plan, the team has put up customisable water-wise posters, originally designed for UCT’s Information and Communication Technology Services by Niki McQueen, communications co-ordinator for training services. (Download the posters or contact Niki McQueen.)

In addition, they have ordered “I am water-wise” buttons for the staff to show their support.

“We’ve ordered extra buttons for students should they also want to take part in this campaign,” says Theresa Schoeman, the Marketing and Project Support librarian.

UCT News previously reported that UCT has been working with industry experts and engaging with stakeholders in the City to drive awareness and water-saving campaigns on campus (Read the DVC Desk…). UCT Libraries’ efforts form part of the university-wide commitment to save water.

UCT’s Water Task Team was created to address and manage the impact of the drought on the university. Thanks to the work of the task team, UCT has committed to reducing its water consumption by 50% (Read the DVC Desk…) and has launched various awareness initiatives, such as easy-to-implement water-savings tips. 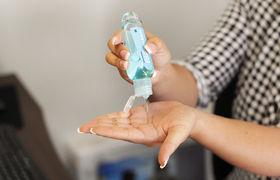 News
Day Zero is meant to cut Cape Town’s water use: what is it, and is it working? 20 Feb 2018 Republished 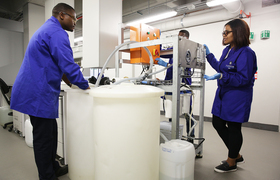