Sprint sensation Mpumelelo Mhlongo won his third consecutive UCT Sportsperson of the Year prize at the university’s annual sports awards dinner on 3 November 2017. It is the first time in history that an athlete has taken home the top trophy three years in a row.

This was a poignant ceremony. The joy of the victors played out against a sad backdrop, with Lydia Hall, the eminent sports administrator who coordinated the sports awards dinner for 31 years, having passed away in May this year. Hall was posthumously honoured with the Chairperson’s Award, presented to the person who has made a huge and positive impact on sports at UCT. Hall’s bereaved partner, Tish, received the trophy and plaque on her behalf.

Associate Professor Tessa Minter, chair of the Sports Council, recalled words spoken at a memorial service for Hall in May: “Lydia’s testimony was a life lived for others, with integrity and fulfilment. To live on in people’s hearts, is not to die.”

Soon after, the guests were to hear that former sports administrator Patrick Williams had, sadly, died earlier that day.

It was the hard work of people like Hall, Williams and their colleagues that laid the foundations for the attendant athletes to flourish. And flourish over the past year they did, evidenced by the myriad half colours, full colours and trophies being handed out.

UCT Sportsperson of the Year

None flourished more than Mhlongo. The T44-division sprinter was given a standing ovation as he made his way to the podium in apparent disbelief. Nobody had taken the Jamison Cup – the huge trophy given to UCT’s top athlete – home thrice in a row before. To put it in perspective, all-time rugby great HO de Villiers won it twice, in 1966 and 1967. Mhlongo’s hand must be imprinted around its neck by now.

The fastest athlete at UCT, Mhlongo excels in three events: 100 m, 200 m and long jump. Among a long list of notable performances in 2017 (which will follow), Mhlongo was particularly impressive at a University Sports South Africa (USSA) 100 m race, where he was up against non-disabled athletes, tripped on his blade at the start, fell, picked himself up and finished sixth with a time of 11.7 seconds. Stunning. And now for the list:

Mhlongo represented UCT at Varsity Athletics in the team that won the B section and has been invited to participate in the International Wheelchair and Amputee Sports Federation World Games in Portugal in December 2017. All this while battling knee and back injuries.

Coach of the Year

Organised sport is a team game, and the best teams, typically, have the best coaches. UCT has some of the best coaches around, and the best of the best in 2017 was Sergey Paly, who trains UCT’s all-conquering basketball men’s first team. In 2017 Paly’s team won the USSA Western Cape National qualifiers, came fourth at the USSA National championships, and in the local Cape Town Basketball league they are holding first position with four weeks to go. He is an assistant coach for the senior national men’s team that qualified and competed in the AfroBasket 2017 championships in Senegal and Tunisia. Paly beat out stiff competition from Ahmed Parker, who coaches UCT’s similarly dominant football women’s first team, and Sue Schooling, head honcho on the netball first team.

If you’ll forgive the pun, UCT’s Mountain & Ski Club towered above their rivals to be crowned the 2017 Club of the Year, with the trophy henceforth being named in Hall’s honour. This trophy is given to the best-run club in terms of administration, financial management and development programmes. Demonstrating their ability, the mountaineers maintain some 8 000 hectares of land in the Western Cape on behalf of UCT and are one of the largest sports clubs and best-run organisations at the university. A highlights video of their members hauling themselves up sheer boulders by the strength of their fingers proved they’ve got the hardcore athletic prowess to match their administrative competence.

This trophy also went to the phenomenal Mountain & Ski Club (MSC). Their mission is to make the mountains a place that everybody can afford to go to, so that everyone may enjoy the Western Cape’s natural beauty. Their Transformation and Development Fund (TDF) is one way to realise this goal. Students can apply to the TDF, join the club and take part in its activities even if they are financially unable to do so.

Another of the club’s initiatives, the Siyenyuka programme, extends its influence beyond UCT’s borders. Partnering with the NGO Project 90 by 2030, the MSC organises hikes for high-school “leadership clubs” from nine schools across Cape Town, covering transport, food and costs for the scholars. The hikes are designed to create interaction between UCT students, high-school students and scholars from different backgrounds, and to expose high-school students to the natural environment, creating a generation of conservation-conscious young people.

The 2017 sports residence champions are the Young Lions from Leo Marquard Hall. This award is given to the residence that accumulates the most points in the annual inter-res sports festival, which covers a range of sports. MC Muya Koloko, who’s been a leading figure in UCT Sports for more than a decade-and-a-half, urged clubs to invest in residence sports. “The more people that are in it in terms of res, the bigger your talent pool,” he advised. “And it is a way of introducing people to new sports.”

Ruth Amoore, who chaired the Student Sports Union (SSU) this year, won the Turpin Cup for service to sport at the university. Amoore’s involvement in sports administration extended to her role as chair of the UCT Fencing Club, and she is currently the sole representative of student concerns on the district-level committee of Fencing Western Cape, where she manages the competition portfolio. Amoore’s colleagues describe her as “the champion for students in situations where students have been aggrieved or their voices have not been heard”, and that she ran the SSU “with commendable leadership, discharging tasks and leading sport into fulfilling the vision and missions of not only UCT sport, but also UCT as a whole”.

Rising rugby star Kuyenzeka (Nama) Xaba was named the best first-year athlete for 2017. Nama, as he is known to friends and teammates, was the youngest player in UCT’s 2017 Varsity Cup team, earning a reputation as one of the most exciting players on the field. At just 19, Nama joined the likes of Springboks Eben Etzebeth, Damian de Allende and Dillyn Leyds to make the UCT first team at such a young age. Soon after the Varsity Cup, he was picked for the South African team who played in the International Rugby Board’s World Rugby U20 Championships in Georgia. The team finished third in a tough competition, where most of the players were professionals, and few having academic or other commitments. Nama also played in the WP U21 Currie Cup team, a team he co-captained in 2016. A recurring ankle injury put an end to his season (he hobbled up on crutches to receive this trophy) and his presence as a leader was missed on and off the field.

Landstem Trophy (Performance of the Year)

This year’s Landstem Trophy went to the Yacht Club’s UCT2Rio 2017 team, for their ace sailing across the Atlantic Ocean. Their 37-foot yacht was the second smallest of all that entered the 2017 Cape to Rio Yacht Race. But while two professional yachts retired and another sank during tempestuous weather after leaving Cape Town, the Ikey sailors forged on. Clearly, the two years of preparing the boat, finding sponsorship and building a team had been time well spent. That they started the race (never mind finishing, which they did 18 days, 22 hours and 35 minutes later) after losing crucial team member Peter Marsh to an angle-grinder accident three days before race day is admirable; that they were the first amateur boat to cross the finish line is even more impressive; and that they were the first team to collect scientific data on the Benguela current during their sail is just showing off. This research was endorsed and done in conjunction with the UCT Oceanography Department and the South African Weather Service, and inspired their slogan, “Racing for Research”.

Butterworth Cup (Team of the Year)

The 2017 Team of the Year is UCT Ultimate’s first team, the Flying Tigers. A stunning run of form started in last year’s Rocktober tournament, which they won, with no team scoring more than nine points against them (out of a possible 15). Despite a shaky start in 2017, the Flying Tigers won every trophy on offer, including the league, except for the Mother City Invitational, in which they placed second. The Nationals tournament in April was a big hurdle with a big prize – the winners get to attend the World Ultimate Club Championships in 2018. And, as winners do, they won.

Not satisfied with being the best Ultimate team in the country, they kept the engines revving high and screamed to victory at the African Club Championships. UCT’s Flying Tigers are officially the best team on the continent. A trip to Ohio for the 2018 championships beckons. 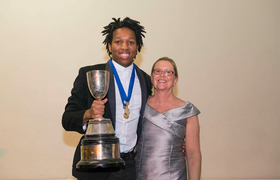 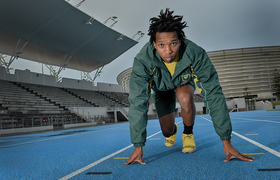