Club gets its second wind at Lipton 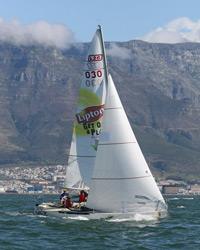 Breezy stuff: The UCT Maverick makes its way to the front of the pack at the 2010 Lipton Challenge Cup.

The UCT Yacht Club earned its best finish yet in the 102-year-old Lipton Challenge Cup, kind winds and smart helming earning the team an ovation-worthy fourth spot at this year's event, hosted by the Royal Cape Yacht Club at the end of August.

The competition allows UCT students to match boats and wits against the country's best sailors. UCT crews have put in some polished performances over recent years, including, in 2007, UCT's up-to-then best result - sixth.

After a good race at the previous weekend's L26 Western Province Championships, there were high hopes that the 2010 team - skipper Oliver Hobson, helmsman Ross Dyer, crew Stewart Cardis, Bridget Clayton, Connor Leech, Neil Malan and team manager Geoff Kilpin - would vie for a place among the top five at Lipton this year. And right from day one the UCT boat, named UCT Maverick, was among the leaders, finishing fourth in the opening race. The crew would hold on to fourth place with reasonably consistent racing afterwards, finishing ninth, sixth, third, 12th and third again in races two to six.

With just a handful of points separating the top five boats, there was plenty to race for on the final day. "Sailboat racing is all about consistency and making fewer mistakes than the next competitor, by achieving a great start and choosing the correct wind shifts throughout the race," says Clayton.

Which is exactly what UCT had to do in that final race. Lying in ninth position at the top mark - which would drop them to eighth overall - a bold tactical call from Malan sent the team to the right-hand side of the course on the prowl for a stronger breeze and a wind shift. Great helming by Dyer and precise foredeck work and trimming by the rest of the team shot them into third place in the race. That was enough to secure fourth position overall, and a feather in the cap for UCT sailing.

But Maverick wasn't the only boat crewed by UCT students. William Crockett was on board the third-placed Orion Challenger of the Royal Natal Yacht Club. In turn, Danielle Jarvis was part of the all-women's team that sailed under the colours of the Imperial Yacht Club on the boat Bandito, finishing 11th. And the more fun-orientated Team Well Hung, representing the Hermanus Yacht Club and featuring another all-UCT crew - in skipper Gabriel Fernandes and Julius Biermann, Nicholas Bush, Colin Greyvensteyn, Elizabeth Whipple and manager Rudi Aucamp - cruised into 24th spot out of the 25 boats.