Tribute to a cricket legend 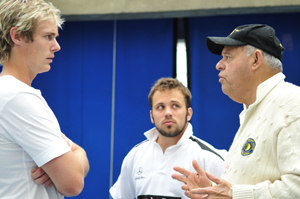 Talking cricket: Hylton Ackerman, here with Martin Walters and Travis Townsend, will be sorely missed by the UCT players.

Hylton Ackerman, cricket icon, television commentator and "one of the best batsmen not to play for South Africa", died in Cape Town on 2 September, aged 62.

Ackerman suffered from diabetes and underwent regular dialysis treatment. An enthusiastic coach to young cricketers - he worked with the local Plascon Academy for eight years - Ackerman had also coached the UCT first team since 2008.

He paid special attention to instilling a sense of 'old school' values in the students, says the club's administrator, Kobus Olivier. "He's the best coach I've worked with. He had a very special way of working with young guys."

In keeping with the international tributes, UCT will honour Ackerman with a minute of silence at its season-opening game, and both UCT and their rivals will don black armbands on the day.