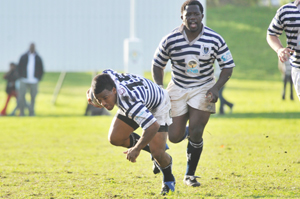 In picture: UCT's Therlow Pietersen makes a beeline for the SK Walmers line, with Springbok hooker Hanyani Shimange in support.

The FNB UCT First XV marked their post-vacation return to the WP Super League with the debut of Springbok hooker Hanyani Shimange, but also with a one-sided 11-16 defeat to SK Walmers on Saturday 1 August at the Green Point Track (which stands in the shade of the 2010 stadium).

One-sided in that the Ikeys had the lion's share of the ball and territory, but SK Walmers fended off attack after attack with ferocious tackling and clever rucking. SK's tireless defence paid dividends, as a breakaway try and a near-flawless performance from their flyhalf saw them take a prized scalp.

Coach John Dobson had to ring some changes for UCT's midweek game against Victorians in Stellenbosch, with flyhalf Matthew Rosslee and fullback Therlow Pietersen called up for duty with the SA Universities team, who played a US college squad on the same evening. UCT still took the honours, however, winning the match 31-20. The team touched down three times, while Ollie Braithwaite, taking over kicking duties from Rosslee, booted over four penalties and two conversions.