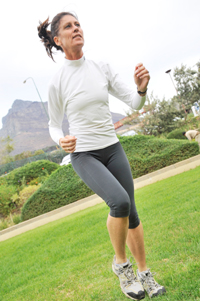 Great race: This month health sciences staffer Deana Edwards will compete in the Racing the Planet's 250-km run from the Fish River Canyon to LÃ¼deritz Bay, a six-day epic.

Many Two Oceans Ultra Marathoners are content to take a break after the event, run in sweltering conditions this year, but not UCT health sciences staffer Deana Edwards.

Having completed her 17th Two Oceans Ultra on 11 April, Edwards was back in action the following weekend, this time up the steep 5.5km Platteklip Gorge on Table Mountain.

Edwards, who recently joined the undergraduate administration team, raced up three times in one day, one of 57 people who'd signed up for the Platteklip Charity Challenge to raise R551 200. (they'd aimed for half a million) for the Masikulisane CrÃ¨che in Samora Machel, a haven to more than 90 AIDS-affected children.

The weather helped. With the mist, Edwards couldn't see how steep it was, how far ahead, or how high.

"There did seem to be a ceaseless number of steps and boulders to go over. The winner went up 10 times, and the top lady eight times. I feel like such a 'wuss'!" she said.

In fact it was UCT's Professor George Schoenbaechler (Department of Psychology) who won the Platteklip Charity Challenge (he went up 10 times), raising an impressive sum of money.

For Edwards, running - or climbing - is more than an effort to keep fit. ("I'm not a natural athlete. I have to dig deep.") Rather, it's also an opportunity to support those in need (the Plattelkip charity run) and a chance to visit some remote parts of the world, places of exquisite beauty, like the Fish River Canyon, where she's headed this month.

Edwards will run across the Namibian desert, from the Fish River Canyon to LÃ¼deritz Bay in Racing the Planet's 250-km journey, completed over six days.

She will carry everything in her backpack (she chose one over another for the 400g weight difference): sleeping bag, mat, food, medicines, water and an MP3 with "some great desert blues music", Van Morrison and Mark Knopfler.

"I'm so excited about this adventure and it has been such fun getting fit, running up and down Table Mountain through Cecilia Forest, across dunes at Noordhoek beach and then experimenting with all kids of foods to find out what goes down well, what's delicious, or what I just can't digest."

The food-energy-to-weight-ratio is important. Her pack weighs 12kg but she's hoping to whittle this to 10kg.

She's especially particular about her shoes (she's running in New Balance), which must offer the comfort of slippers but protect her feet from rocky terrain, and gaiters to keep abrasive desert sand out.

Endurance is a mind game, she says.

"Always start with the end in mind, and you will get there with great aplomb. We have no idea of what our bodies are capable of."