Alumna an ambassador to the highest court 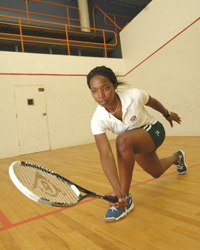 UCT alumna Siyole Lusaseni has been named one of eight international ambassadors for Squash 2016, the sport's campaign to be included in the Olympic Games as from 2016.

Squash, played in 175 countries by over 20 million people, is bidding against six other sports for inclusion in the Games. The IOC Executive Board will meet in June to assess submissions from each of the sports, before the final vote by all of the IOC voting members in October.

Lusaseni represented South Africa at the Women's World Team Championships in Egypt in December, when she defeated the world number 22, Annelize Naude of the Netherlands, and finished the event unbeaten in the number three spot.

"As the newest member of the Women's Professional Squash Association, I am honoured to have been selected," said Lusaseni, "and am really excited about this opportunity and being able to make a contribution to this campaign."