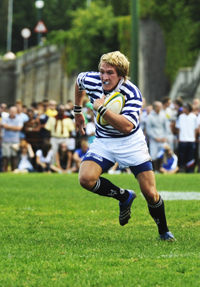 The UCT Ikey Tigers showed glimmers of last year's impressive form when they bagged a whopping five log points after their 39-21 win against TUT (Tshwane University of Technology) last Monday.

Coming on the back of a defeat in their first game against Maties (Stellenbosch won 12-10), UCT rugby club manager Gavin Sheldon said this time the Ikeys had created some "fantastic" tries, convincingly beating the Pretoria outfit in a high-scoring affair.

Western Province fullback Tiger Bax, who was "tested" at centre by coaches John Dobson and Robbie Fleck, created plenty of opportunities for his team - and countless problems for the TUT defence.

TUT were up 6-0 after two kicks early in the game, but the Ikey Tigers soon found their rhythm and scored, going ahead 18-11 at the break. The home side fought back with two tries after the break, but it was UCT who finished stronger, scoring a total of five tries to three.

Flyhalf Matt Rosslee had a much improved showing with the boot and added 14 points to the tally. UCT flyer 'Marvellous' Marvin Christians and hooker Mark 'The Goose' Goosen also put themselves on the score sheet.

Bax put the result beyond any doubt when he showed some great running to find his way over the line, untouched, with barely a minute to go. He was also named Man of the Match.

Next week UCT hosts the University of Johannesburg at home on the Green Mile, and the team needs a return of the blue and white tide.