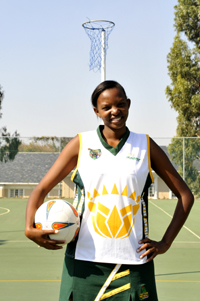 Sphelele Sikhakhane is the 18-year-old goalkeeper of the UCT netball first team. She was also the winner of the 2007 UCT Sports Award as the best first-year student.

Goalkeeper? They have that in netball?

As in soccer, hockey and all those other sports, the goalkeeper is the last line of defence in a netball line-up. Often the tallest players on the park, goalkeepers often go onto their tippy-toes as they try to keep the near-as-lanky goalscorers from shooting.

Sikhakhane hails from KwaZulu-Natal where she attended and played netball for Warner Beach Primary and Kingway High School, and was lured to Cape Town by the quality of netball in the province and UCT's academic credentials.

So what's she up to?

Well, she's a busy young woman. Apart from her commitments to the UCT team, Sikhakhane's also a second-year physiotherapy student. Netball's her first love, though. "I don't have a life outside of netball," she's fond of saying. So she regularly dons the colours of the Western Cape Tornadoes - the netball cousin to the likes of the rugby Stormers and cricketing Cobras - and coaches the under-14 team at Herschel Girls School, helping out with the school's first team as well. She played for the national under-18 action netball - the indoor variation - in 2007. And she's just been selected for the South African under-19 squad to take part in the Zone 6 Africa competition in September, her second appearance in the team.

UCT Sportsperson of the Year, that's what. And to get better at her game. "I want to keep on learning," she says. "That's how netball is."