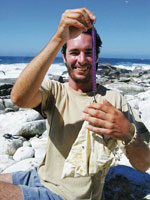 When Douglas Loewenthal started research for his doctorate in zoology, he didn't expect it to influence conservation legislation before his official graduation.

But not only has it helped sway government policy with the banning of off-road vehicles on South Africa's beaches, it has also helped raise widespread awareness regarding the threats facing other coastal fauna.

To develop predictive population models to guide coastal conservation management, Loewenthal wanted to understand the response of shorebirds to changes in habitat quality.

Loewenthal's BSc in zoology, honours in marine biology and master's in conservation biology were all gained at UCT and he is proud of his family's longstanding links with the institution.

High up on his list of formal acknowledgements, alongside his supervisor, Associate Professor Phil Hockey, is his father, Prof Dick Loewenthal, also a UCT graduate, and recently retired from the Faculty of Engineering & the Built Environment.

"I would like to thank my father for his intellectual input, hours of fruitful discussion and, at times, his much needed sense of humour - no words can really do it justice," reads Loewenthal's formal thanks.