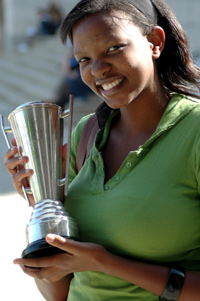 To say Sphelele Sikhakhane is passionate about her sport might well be a bit of an understatement. By her own admission, she eats sleeps and breathes netball, and it is this level of dedication that won her the coveted Best First Year Award at the Annual Sports Awards Dinner on 26 October.

The award covers all sports played at UCT and is given to the first-year student with the most impressive track record. In her short time here, goalkeeper Sikhakhane has made a significant contribution to the success of the netball first team this year.

"We've had an awesome season," she says happily. "We've won every game we played."

This year the netball first team took top spot in the Western Province Netball Union's A1 league, and was promoted to the Super League, the WPNU's top tier, where they will play in 2008.

"Next year is going to be tough," she says, relishing the challenge. "The Super League teams are very strong, so we're going to have to play our best."

Sikhakhane, a first-year physiotherapy student, has been playing netball since the third grade, and at first team level from as early as grade nine. She's also played on several provincial and national teams, including the South Afrcan U19 outdoor and the U18 Action teams.

"My goal for next year is to get into the U21 national side, and in two years time I hope to make it to the national side," she says ambitiously.

But Sikhakhane is focused on the present, with netball workshops, training and tournaments taking up much of her time.

"During the term I have to balance the netball with my studies, but during holidays it's almost all I do," she says. "It's my life."