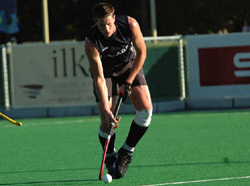 Going for gold: Eugene Pelteret has been selected for the SA under-21 training squad.

The UCT first team may have had an unremarkable year in the Western Province Grand Challenge hockey league, but that didn't keep Eugene Pelteret from catching the eye of national selectors.

Pelteret, 20, has been named for the South African under-21 training squad, from which will be selected a group to play in the African Junior World Cup Qualifier Tournament in September 2008. Here teams will vie for spots in the Junior World Cup in 2009.

Should he make it into the final squad, it won't be Pelteret's first showing in the green and gold. He's already represented South Africa at under-16, under-17 and under-18 levels.

Which may explain why, for now, there are no butterflies fluttering about in his stomach.

"I'm not really nervous," says Pelteret. "But, unsurprisingly, I am very excited at the possibility of playing for my country at an international tournament."