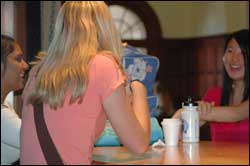 UCT was informed late last year that the Compass Group, the tenants of both the Food Court (including Steers, Pizza and Stop Gap) and CafÃ© NescafÃ©, had decided to not renew their lease in 2007.

After discussions with the Students' Representative Council in December, UCT started restructuring the Food Court into six separate outlets, offering traders who had been operating outdoors in the vicinity of Jameson Hall and PD Hahn Building an option to move in. It was also agreed that external food vending in these areas would no longer be permitted.

The new Steve Biko Food Court will have four kiosks and two food outlets, offering a range from traditional African foods and the popular budget roll to sushi. One of the venues will operate solely as a grocery store.

Tenants are due to have moved in and started trading this week, said Duke Metcalf, manager of Estates and Custodial Services.