Reimagining the Jagger Library – together

When the University of Cape Town’s (UCT) Jagger Library burnt to the ground in April 2021, there was no question that it would be restored. However, instead of embarking on the usual closed tender process, the UCT campus and wider Cape Town communities were invited to help reimagine the phoenix that will soon rise from the ashes.

In keeping with UCT’s Vision 2030 strategic objective to rethink higher education, knowledge and the role of the university as a thought leader and change maker, the Futures Think Tank under leadership of Professor Alison Lewis invited students and stakeholders to help brainstorm the new Jagger Library during a series of imaginarium workshops.

Facilitated by UCT alumnus Dr Heeten Bhagat, these imaginariums took a double-pronged approach with the first few sessions focusing on the cerebral aspect of building a vocabulary around the values the restoration project should embody, followed by more creative sessions focused around bringing those words to life in drawings.

Drawings, words and ideas emanating from these workshops were then curated and distilled into a series of 30 posters designed by Cindy Yeh and Chi Chi Xu, which culminated in the Jagger Exhibition of Ideas held on Thursday, 28 July 2022, in the Molly Blackburn Hall on upper campus.

The informal lunchtime exhibition gave UCT students and staff the opportunity to browse leisurely through the posters, as well as a selection of original drawings created during imaginariums and to engage with Dr Bhagat, Professor Lewis and UCT Vice-Chancellor Professor Mamokgethi Phakeng around the ideas presented.

“When the Jagger went down in fire, we had a lot of people who supported and stood with us,” said Professor Phakeng. “Now, we are at the point where we want to rebuild and reimagine the Jagger. So, we thought we should do it with those people.”

She added: “This exhibition is really about capturing the spirit of the people who supported us, feeding into the process of reimagining the Jagger.” 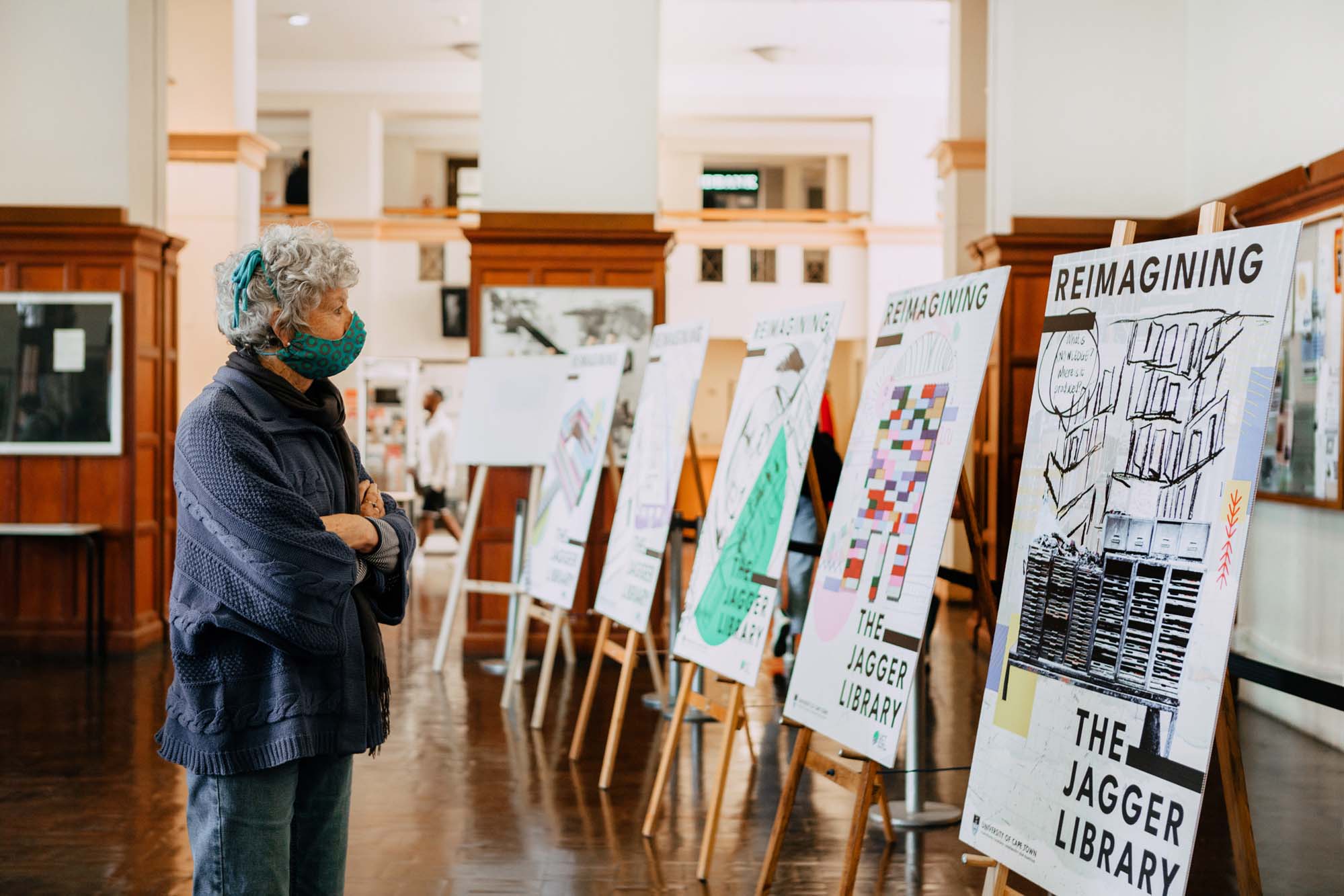 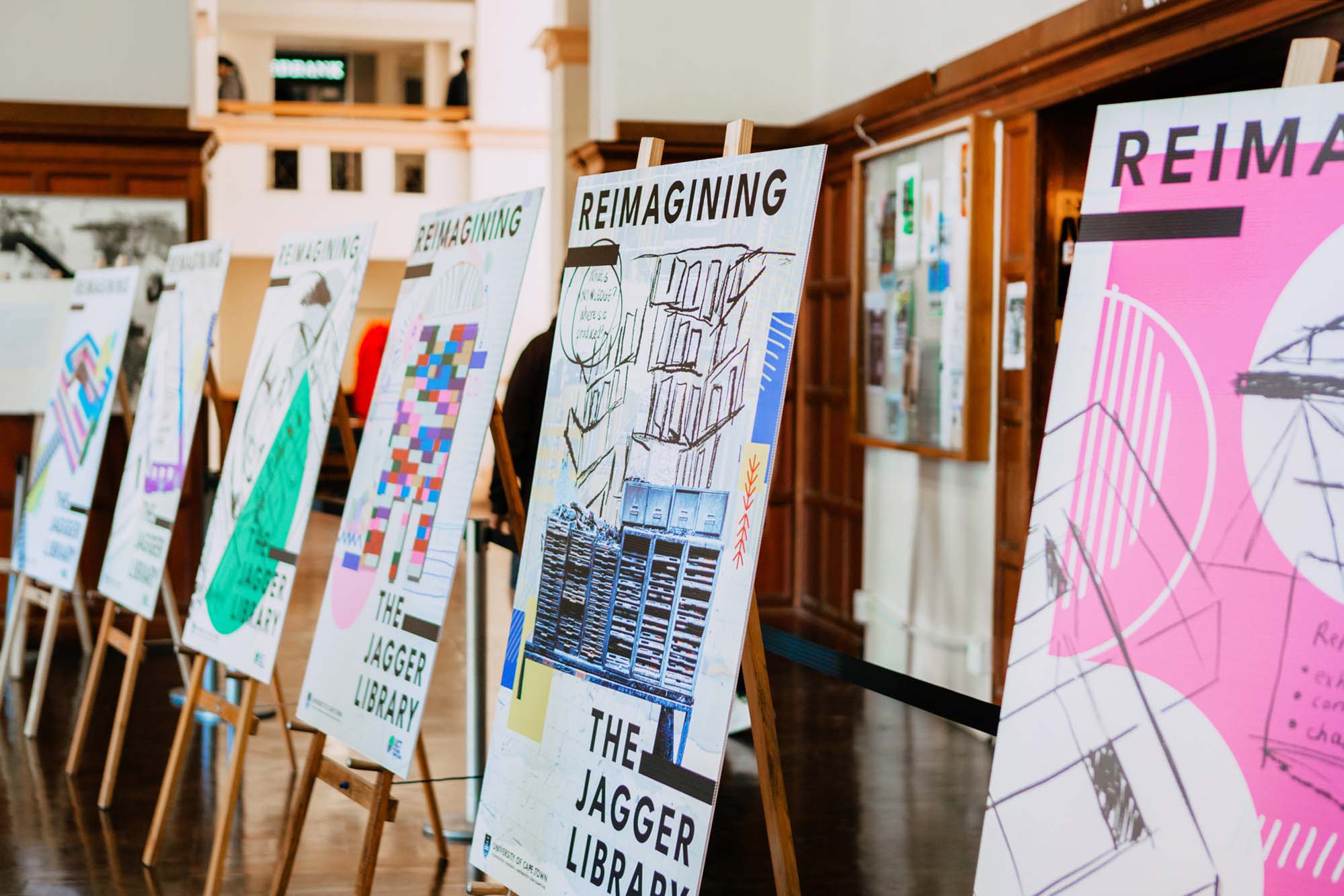 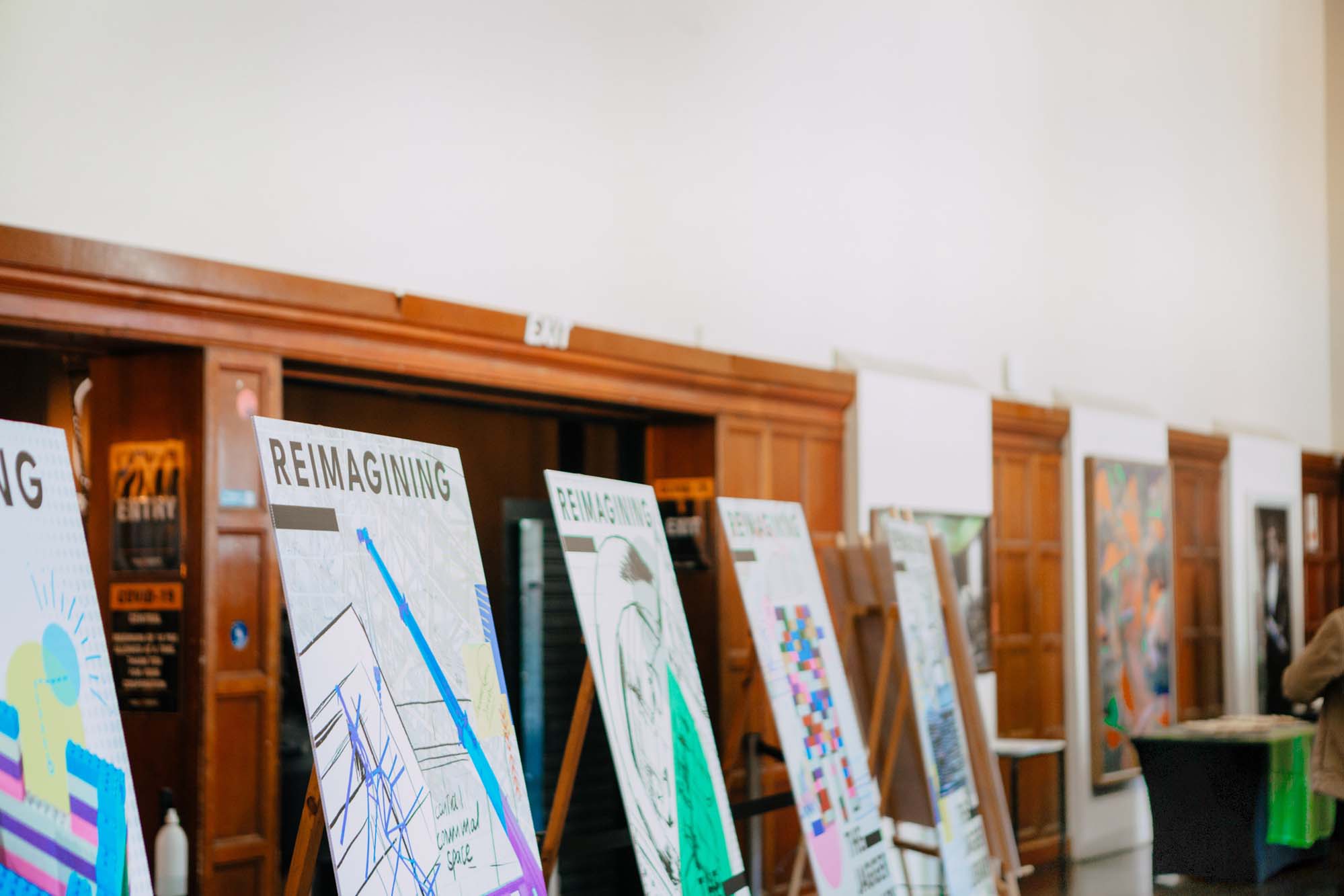 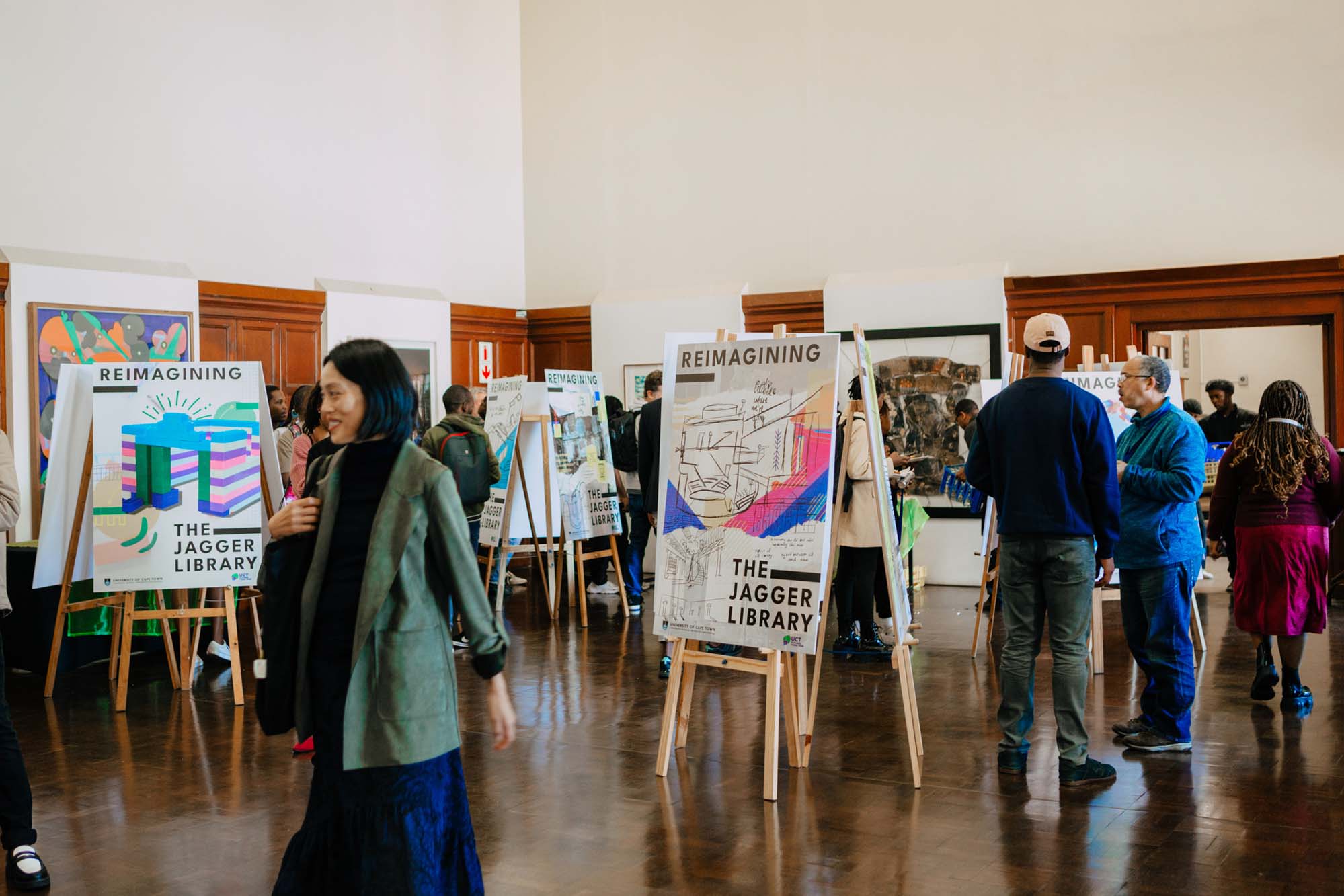 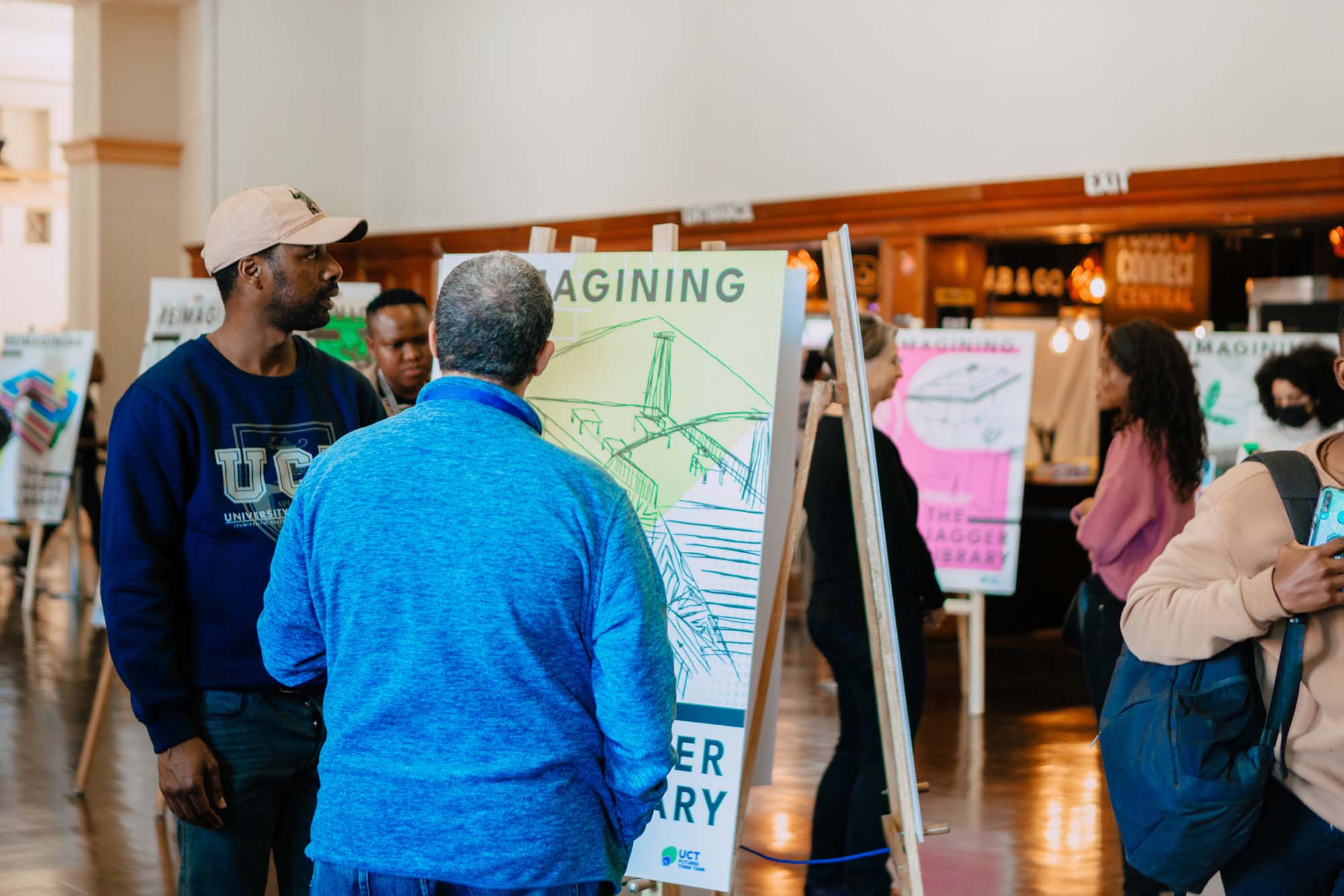 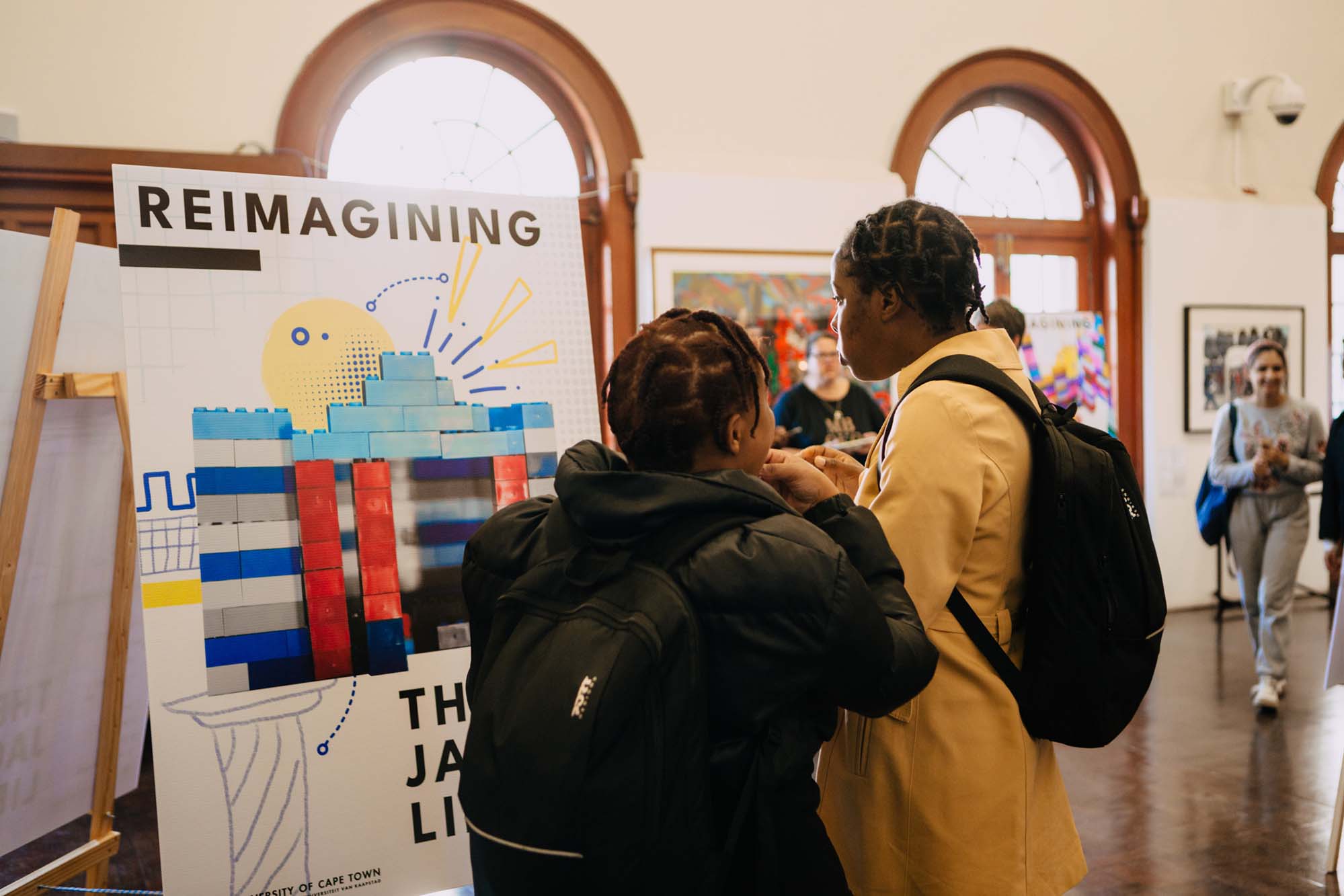 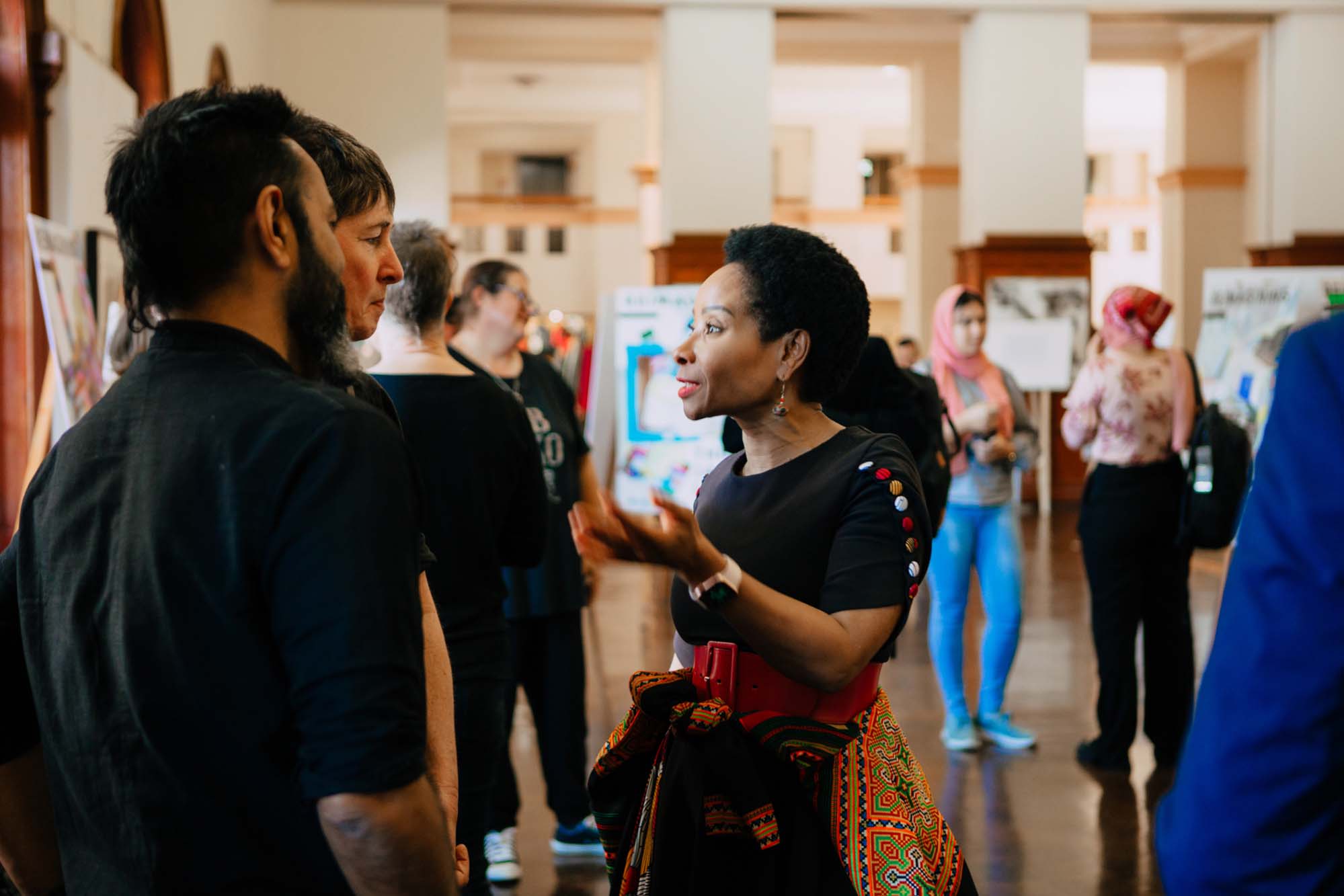 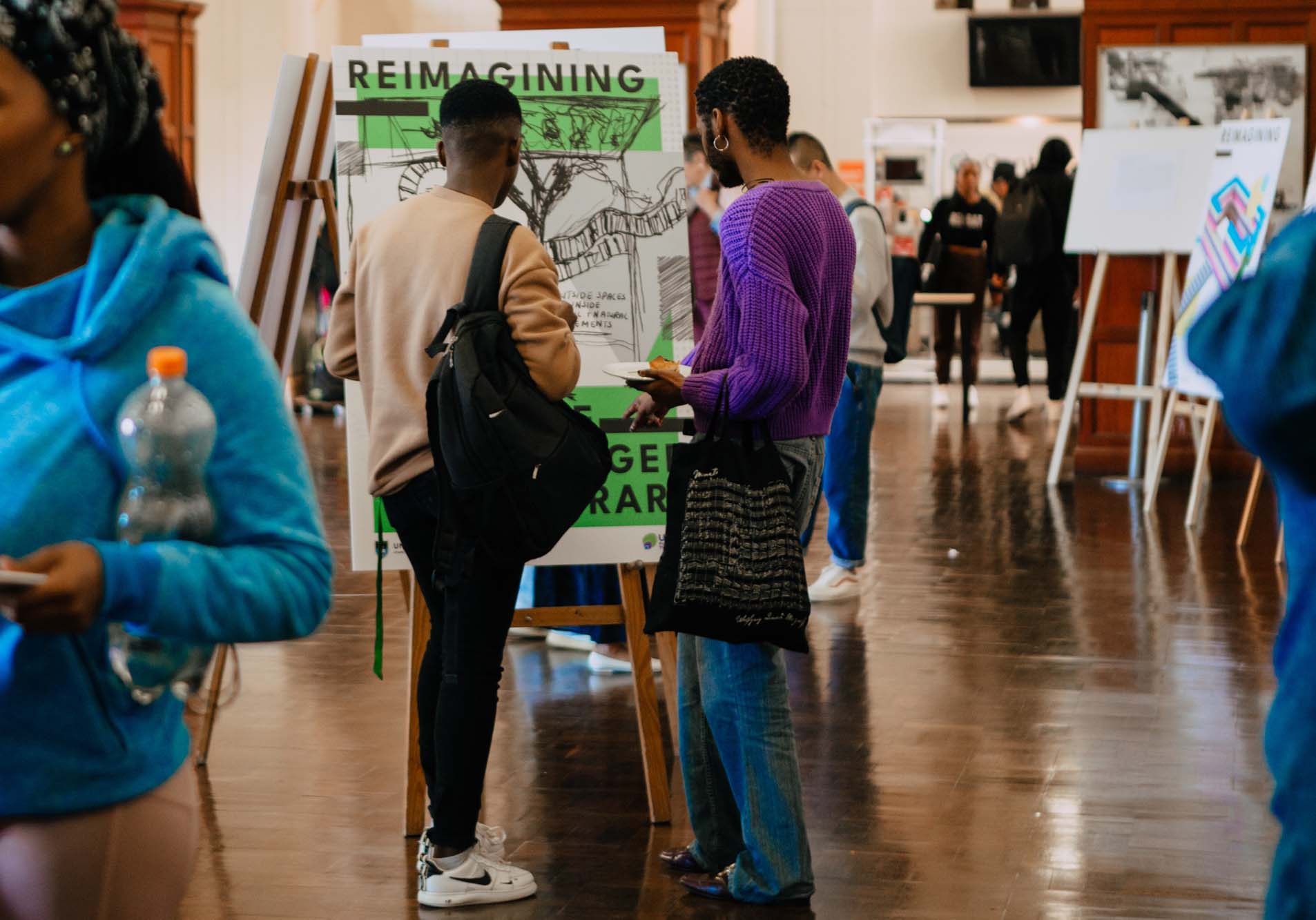 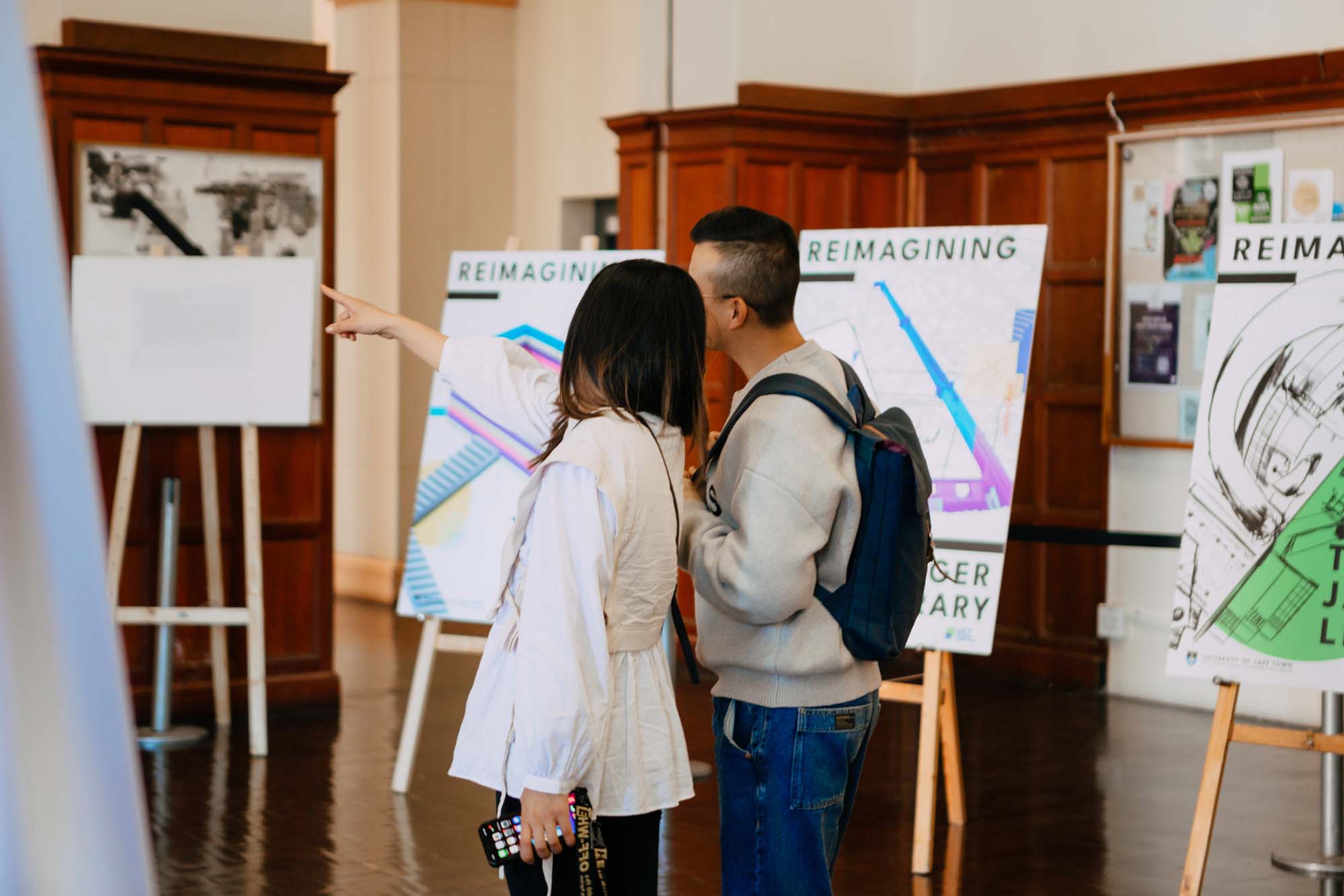 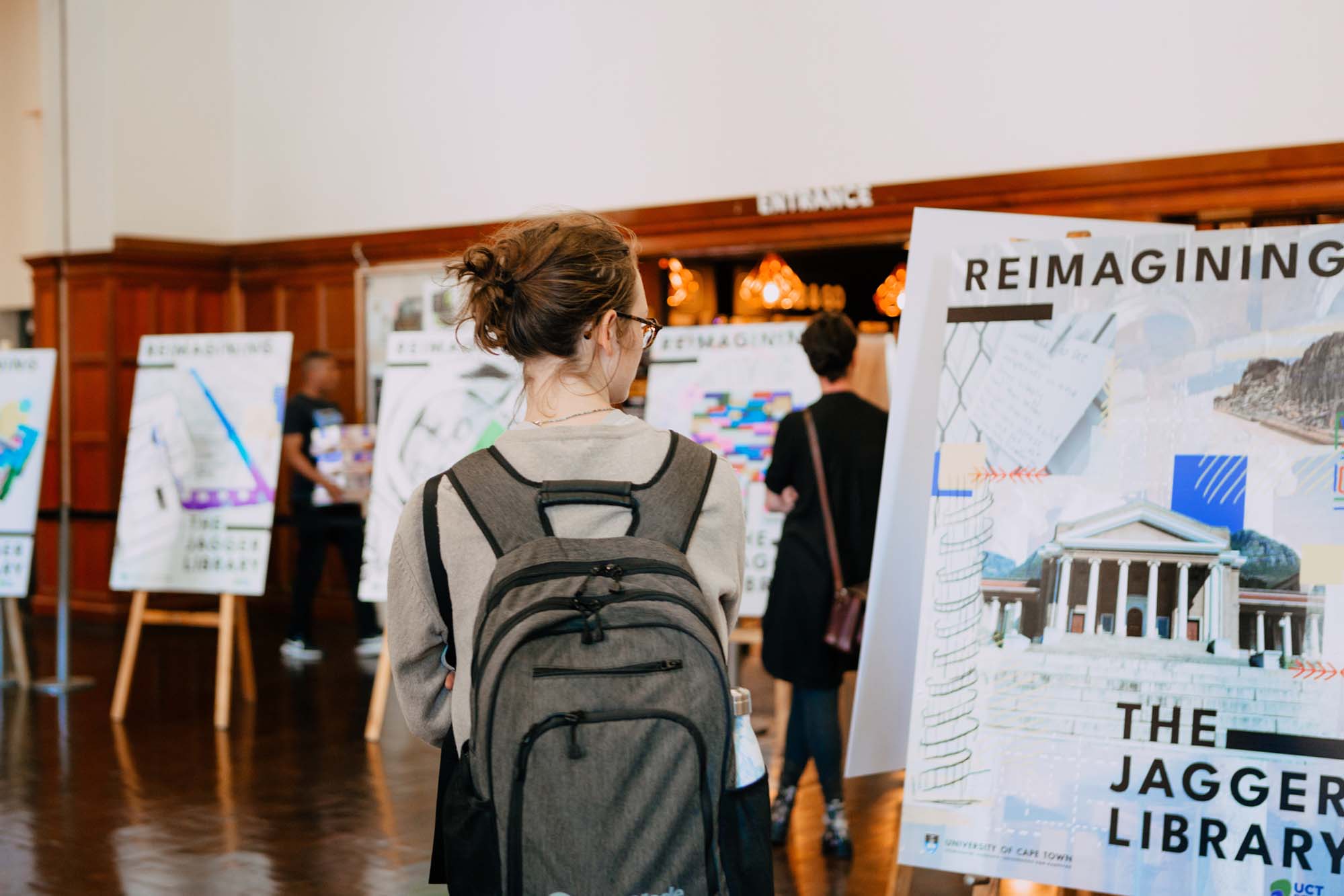 The informal lunchtime exhibition gave UCT students and staff the opportunity to browse leisurely through the posters, as well as a selection of original drawings.

The idea to involve the UCT community – both on and off campus – in the process was initiated by Lewis and inspired by the ongoing inclusivity work being done by the Futures Think Tank.

Normally, projects of this nature would be put into motion with a very strict tender process, guided by a tender document put together by the relevant leadership and closed to public input and engagement.

“In my view, that’s very narrow and we wanted to do something that was more inclusive, broader and more persists UCT’s role as a university of Cape Town and of South Africa and of the continent,” explained Lewis.

Reimagining UCT’s library of the future

Bhagat was then approached to assist in facilitating imaginariums with a diverse range of stakeholders, including students, architects, librarians and learners.

Referring to himself as a ‘pragmademic’, Bhagat specialises in bringing some method into the often-convoluted process of seeking solutions to “big, messy problems”.

At the beginning of each session, Bhagat posed the question to participants: “What does a library mean to you?”

“Libraries are never just a soulless building filled with books. They are very, very meaningful places to people.”

“The stories that always came out of this were amazing,” said Lewis. “Participants shared things like … libraries had served as a safe space away from an abusive family; the place where I first discovered books; my aftercare; discovering learning. What really struck me was that libraries are never just a soulless building filled with books. They are very, very meaningful places to people.”

Building on this, they were then encouraged to start imagining what their ideal library would look like, feel like, and what values it would embody.

“So many interesting ideas emerged,” Bhagat said. “They ranged from very conservative, like rebuilding the Jagger exactly as it was, to knocking the entire building down and replacing it with a garden that has the best possible Wi-Fi.”

One of the ideas that stood out to Phakeng was having an area where people can just sit and relax while playing with Lego blocks.

“I like the idea of having Legos in the Jagger as a means of helping staff and students destress,” she said. “I never thought we could do something like that but I actually think it’s a good idea.”

Now that community input has been received through these imaginariums, the university is ready to launch the tender process.

“The tender document that is written will now be informed by this whole pre-process, so I’m hoping it’s going to be richer, more interesting, more provoking,” said Lewis.

Architects who bid will also have access to the drawings created in the imaginariums to inform and inspire their own designs.