World champion and University of Cape Town (UCT) star athlete Mpumelelo Mhlongo put on an exhilarating performance at the 2021 Paralympics in Tokyo, Japan. The exceptionally talented athlete came in at 11:03 seconds in the men’s 100 m combined T44 and T64 class final, and 6:80 m in the men’s long jump T44 final, breaking the world record in both events.

“It’s been a real privilege to compete with the best on the world stage and I am heartened by the response my achievement has received,” he said.

At 27, Mhlongo has overcome a lot in life. He was born with amniotic band syndrome, which resulted in a clubfoot and his right leg being shorter than his left. But with his can‑do attitude, he has achieved great things – on the track and in the lecture hall. He’s currently completing his PhD in UCT’s Department of Chemical Engineering under the supervision of Professor Klaus Möller. His research project focuses on converting plastic waste into diesel.

Speaking to UCT News from Tokyo, Mhlongo said he’s elated that his achievement could bring some light and cheer to South Africa, especially as the country and the globe faces many challenges.

“If I was able to shine some light on people’s lives as they go through their own individual struggles, then I’m happy.”

“If I was able to shine some light on people’s lives as they go through their own individual struggles, then I’m happy,” he said.

Despite strict COVID‑19 protocols, Mhlongo said Paralympians received an extraordinary reception from Japanese volunteers, and feel right at home in the country.

He said volunteers have made a huge effort to communicate with athletes in one of South Africa’s official languages and use words such as “hello”, “please” and “thank you”. This, Mhlongo said, shows that they’ve gone the extra mile to make athletes feel welcome.

“The atmosphere here has been amazing. Even though there aren’t any crowds and we’re in our bubbles, the Japanese have been wonderful. We can’t ask for more,” he said.

Since the start of the games in August, Mhlongo said there have been a few standout moments. But witnessing his friend and roommate, 19‑year‑old Ntando Mahlangu, win gold in the long jump T63 final, brought him the “greatest amount of joy”. Mahlangu set a new world record with a jump of 7:17 m, beating Germany’s Leon Schaefer’s 7:12 m.

“Watching Ntando break a world record and just being part of that moment was something else. Knowing the emotional toll it took on him, and witnessing how he embraced that winning moment was heart-warming and brought me so much joy,” he said. 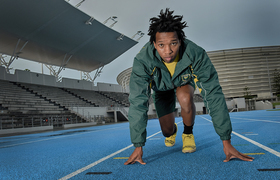 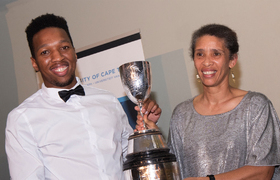