A team of academics at the University of Cape Town’s (UCT) Division of Medical Gastroenterology have performed South Africa’s first successful bowel enteroscopy (endoscopy of the small bowel). The cutting-edge procedure was carried out at Groote Schuur Hospital (GSH), and is set to transform the way clinicians access and examine the previously inaccessible small bowel – using a minimally invasive technique.

The bowel enteroscopy was led by senior consultant Dr Dion Levin in partnership with Professor Mashiko Setshedi, the head of the Division of Medical Gastroenterology. The procedure was carried out using the novel PowerSpiral device, and demonstrates a significant advancement in the field of gastroenterology – the branch of medicine that focuses on the digestive system.

“We are so proud of this achievement. Exciting advances are occurring rapidly in the field of gastroenterology, and UCT is front and centre of it all – leading the way for South Africa and the continent,” said Professor Setshedi.

The small bowel (also referred to as the small intestine) is an organ located in the gastrointestinal tract. It is roughly five to seven metres in length (depending on the person’s height) and absorbs nutrients and minerals from the food we eat.

Prior to this procedure, accessing and examining the small bowel using a standard-length endoscope had always been tricky for clinicians. Enteroscopy is a far more complex procedure compared to other common digestive system procedures such as gastroscopy and colonoscopy (examination of the upper and lower gut respectively), performed to access the oesophagus and stomach, as well as the colon and rectum.

But examining the small bowel is often necessary. Typically, Setshedi explained, patients with iron deficiency anaemia or gastrointestinal blood loss, but normal upper and lower endoscopies, require a small-bowel examination. Over the years, new techniques to access the organ and to address this issue have been developed. One method is video capsule endoscopy (VCE) – an oral camera the size of a large pill is swallowed, and accurately photographs the small bowel as it transits the gut. This procedure provides doctors with a real-time view of the small bowel and helps them diagnose deep lesions.

“But should doctors pick up any abnormalities during VCE, the patient still requires a small bowel enteroscopy to perform a biopsy, or [to] remove or treat the problem,” she said.

In 2003, in a constant effort to improve access to the small bowel, scientists developed balloon-assisted endoscopy. This procedure makes use of a scope and an overtube with one or two balloons attached at each end, to “manually advance the scope deep into the small bowel by inflating or deflating the balloons”. Despite successful results, Setshedi said, the process remains time-consuming and requires significant upskilling.

Now, complex, time-consuming small-bowel procedures are a thing of the past. In fact, accessing this hard-to-reach organ has become a lot easier with the PowerSpiral endoscope. The device boasts a winged overtube, which allows clinicians to intubate the small bowel by easily pleating the mucosa (the innermost layer of the gastrointestinal tract responsible for the secretion of digestive juices and absorption of nutrients) over the tube.

The device also includes a motor encased in the handle that mechanically rotates the tube and allows clinicians to “advance and withdraw the scope” using integrated power foot pedals. Setshedi said the procedure allows for more control of the scope, and provides a quicker (one-hour) assessment of the small bowel.

Thanks to this new technology, Setshedi said, clinicians were able to perform the country’s first successful spiral enteroscopy in late May 2021. Prior to the procedure the patient required many blood transfusions, due to months of gastrointestinal bleeding from an unknown cause.

“We found vascular lesions with a propensity to bleed, which we were able to treat with argon plasma coagulation,” she continued. “[Over time] this should reduce the patient’s need for blood transfusions and improve his quality of life.”

She said the Gastrointestinal Unit at GSH has received the state-of-the-art PowerSpiral device on loan from manufacturers Olympus Endoscopy for the next three months, and they plan to make the most of it.

“I would like to thank all the doctors and nurses in [GSH’s Gastroenterology Clinic] who were involved, and I gratefully acknowledge the Anaesthetic Department, as well as Surgical Innovations”

By introducing this technology – albeit temporarily – she said, the unit has truly reached a milestone, and clinicians are thankful that they are able to effectively service patients who need it the most.

“I would like to thank all the doctors and nurses in [GSH’s Gastroenterology Clinic] who were involved, and I gratefully acknowledge the Anaesthetic Department for their services, as well Surgical Innovations,” she said.

“Finally, I must acknowledge Professor Eduard Jonas, the head of the Hepatobiliary Unit. We work very well collaboratively to acquire state-of-the-art equipment for our unit, and we will continue to do so.” 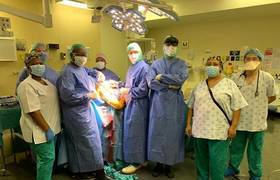 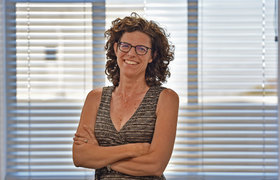 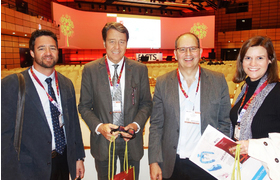