“I have been blown away by the generosity of our fellow South Africans, and the support and care that came pouring in from all corners of the world. It has left me in sheer awe,” said Kumeshnee West, the director of Executive Education at the University of Cape Town Graduate School of Business (UCT GSB).

West was speaking in the aftermath of a raging wildfire, which caused massive destruction to UCT’s upper campus on Sunday, 18 April. As a result, thousands of students were evacuated from their campus homes and were placed at temporary accommodation sites around the city.

Following the massive evacuation operation, the UCT GSB Academic Conference Centre at the V&A Waterfront became one of the main waiting points as UCT staff worked around the clock to secure temporary accommodation for students.

“I am still amazed by what we were able to achieve at the [UCT GSB]. While I led the [UCT GSB] donation collection and distribution centre, it was truly a collective effort all round, and it was humbling to have served our students,” said West.

UCT GSB finance manager, Karo Wilson, said he watched in horror as the fire spread rapidly across the mountain on that Sunday morning. When he received a call from UCT’s Properties and Services department to ask if the UCT GSB Academic Conference Centre could be used as an evacuation point, he knew there would be a lot of work to do. He immediately jumped into his car and drove there.

But Wilson said that despite his expectation, he was still unprepared for what would unfold on the day and over the next few days. The magnitude of the situation was impossible to predict.

“Initially I was told to expect 120 students, but that number soon climbed to 300, and by 16:00 … we had more than 600 students in the conference centre,” he said. “That’s when I put a call out to my colleagues to please assist.”

The response from colleagues was overwhelming – everyone “wanted to do their bit,” Wilson said. And many hands make light work. Aside from arranging the students’ accommodation, he also organised an on-site ambulance in case of an emergency. As demand increased, Wilson continued, the team decided to split the operation in two. He managed front of house, and was responsible for accommodation, food, transport and crowd control. West managed the back-of-house donation and distribution centre.

“Everything worked like a well-oiled machine. There were so many standout moments for me, but one of them has to be how everyone – including some of our spouses – just came together for the greater good. It was wonderful to witness,” Wilson said.

West said that when Wilson put out a call for volunteers to assist with managing students, UCT GSB staff responded immediately. She said what followed was a “massive operation” to register hundreds of students and conduct COVID-19 screening on everyone there.

“We needed to keep top of mind that despite this crisis, we were still in the middle of a pandemic, and we had to follow the necessary health and safety protocols in the process.”

As the day unfolded, staff also prepared other venues to act as interim waiting points, and because many students were stressed and anxious, some venues were converted into satellite medical service points to provide students with health and psychosocial support. She said that snacks and drinks were also prepared and distributed while students waited.

“We desperately needed to solve some of the students’ immediate needs on [that] Sunday evening.”

West said that because most students left their residences with only the clothes on their backs and a few valuable personal belongings, some other immediate needs (warm clothing and toiletries) had to be met fast. To meet these needs, West – together with a Students’ Representative Council (SRC) member on site – requested that some donations, such as toiletries, be delivered directly to the UCT GSB.

Cape Town heard their call. In no time, the UCT GSB Academic Conference Centre became a donation station, and about 120 volunteers assisted throughout the week with sorting, packing and distributing essentials to students. Volunteers included both undergraduate and postgraduate students, as well as UCT staff and alumni.

“We desperately needed to solve some of the students’ immediate needs on [that] Sunday evening. We understood that donations were being sent to Old Mutual, but we knew it would be a while before they got to our students at the [UCT GSB]. So we needed a ‘Plan B’,” West said.

It was heart-warming, West said, to witness the outpouring of love and support students received and how Capetonians rallied together to collect and drop off essential items. Faith-based organisations, non-profit organisations (NPOs), high-school learners and their teachers, and fellow UCT staff and students all came on board to donate.

Some students raided their wardrobes and dropped off clothing items at the donation station. Some donors thought creatively and requested Uber Eats deliveries of water, non-perishables and toiletries.

Corporate South Africa also played a massive role in this effort, she reported. Brands such as Pick n Pay, H&M, Spar, Makro, Cotton On and a list of other businesses all donated to the cause.

“Huge delivery trucks arrived at the [UCT GSB] to drop off donations, and it was heartening to witness.”

“Huge delivery trucks arrived at the [UCT GSB] to drop off donations, and it was heartening to witness. We did not expect the huge response – the sheer volume of donations and the rate at which they were streaming in,” she said.

West praised student leaders such as Sharon Mogale, Jamie-Lee Thomas and Vuyi Qotoyi, who she said had “really stepped up to lead” during the crisis and demonstrated “outstanding” leadership skills.

“The way student leaders showed up, supported, organised and served their fellow students during this time was truly admirable.”

Thanks to the generosity of donors, West said, a surplus of donations was re-donated to the Ladles of Love NPO and to the Cape Peninsula University of Technology. 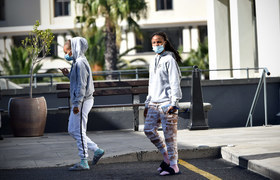