Future of universities bound to their social compact

COVID-19 has shown that the future and relevance of universities worldwide is bound to their social compact – research and knowledge that serves society – and their resilience. Their adaptability and agility in the face of the pandemic and lockdown saw many changing in ways unimaginable just months ago, said Professor Stephen Toope.

Professor Toope delivered the University of Cape Town’s (UCT) Vice-Chancellor’s Open Lecture remotely on Wednesday, 16 September, from the United Kingdom, where he is the 346th vice-chancellor of the University of Cambridge. Under the banner “Global leaders, global partners”, the virtual lecture took the form of a conversation with UCT’s vice-chancellor, Professor Mamokgethi Phakeng.

The future of traditional universities has been under scrutiny in an era of digital learning, shrinking public funds and the Fourth Industrial Revolution. But despite their challenges in a globalised world, Toope believes universities will be indispensable if they serve all of society.

He framed his discussion around servant leadership.

Toope said that his own leadership style is modelled on the servant leader, and he believes institutions can be too. As servants to society they are at their strongest, he said. COVID-19 has shown that governments turned to universities’ reservoirs of research and expertise to find answers to – and a way through – the pandemic.

Their adaptability and agility in responding was demonstrated at Cambridge and at UCT and many other research-led institutions, he said.

“An entire university department focused on infectious disease has pivoted its research to better address the immediate and long-term impact of COVID-19.”

Is the future corporate or public?

Professor Phakeng raised the threat from corporate and private institutions. With Google having fired a shot across the bows of higher education by promising career certificates marketed as the equivalent of four-year degrees in six months, questions about the role, costs and future of universities have become critical, she said.

But social relevance and service play a role here too, said Toope. An academic and research enterprise geared to serving society and working in and through communities enriches universities and their graduates. University education enables students to “construct a life” far beyond a narrow fit-for-job training and purpose.

Toope pointed to a Harvard University study undertaken with the European Union 15 years ago, which showed that healthy societies had healthy, independent universities.

As public-funded universities, much is expected of institutions such as Cambridge and UCT, he added. And public trust is essential to their future.

“For example, we’re expected to deliver the discoveries that will fuel our country’s development … [and] provide the academic, professional, business and civic leadership our countries need. We’re expected to nurture the entrepreneurial and inquisitive mindsets that will transform our countries in the years ahead through our graduates. And contributing to society at the national level means engaging with national conversations that have repercussions outside our own labs, libraries and lecture halls.”

But universities can be global leaders only if they have global partners, he said.

“As we’ve seen, no institution, no country, no matter how seemingly isolated, is immune to events occurring somewhere else on the planet. The society we serve is no longer limited to our immediate communities or even to our countries – whether it’s understanding the molecular basis of Alzheimer’s or helping farmers to increase their crop yields or trying to develop accurate diagnostic tests or vaccines for COVID-19.

“What we do in universities like Cambridge and UCT affects lives and livelihoods the world over. And the people we educate are likely to become leaders of government, of civil society, of academia and of industry. That’s what I mean by contributing to society. It is in this broadest sense that I understand service, and that’s the kind of leadership that I believe universities should aspire to. Our service to society is not only the right aspiration to have, it’s also, I believe, the basis of the social contract that allows us to operate.”

“We have a convening power unlike anyone else’s because at our best we’re seen as neutral spaces.”

He added: “We do that by reaffirming that society’s goals are our own by widening access and enhancing levels of participation, by delivering research and helping to foster innovation that will drive inclusive social and economic progress – and by being open about what we do and about how we do it.”

“Research-intensive universities are perhaps the only modern institutions with the means and the legitimacy to bridge the gaps between disciplines, between different sectors of society and between different cultures. We have a convening power unlike anyone else’s because at our best we’re seen as neutral spaces,” Toope said.

“We’re also uniquely placed to bring together policymakers, non-governmental and international organisations, businesses and the wider knowledge community to explore solutions to real problems in the world. This legitimacy, I hope, allows us to lead in efforts to improve lives – not just at our doorstep but wherever in the world that improvement is needed.”

“The past few years haven’t been easy for institutions like ours, whose aim is to create, curate and communicate knowledge.”

But universities must listen better to understand their societies and connect with them, he added.

“I’ve frequently expressed dismay at a growing sense that our legitimacy as society’s honest brokers is being challenged by the ever more common narrative that universities’ goals and our societies’ goals no longer match. In an atmosphere of increasing regulation and decreasing resources what worries me most is the widespread erosion of trust. The past few years haven’t been easy for institutions like ours, whose aim is to create, curate and communicate knowledge.”

That communication became more essential as technology not only increased the speed of communication but allowed a proliferation of views to emerge and coexist.

“It’s a hugely positive development,” said Toope. “But it challenges long-held understandings of reliable sources of knowledge and insight. And there are legitimate grievances from social groups that have been marginalised and whose voices are finally cutting through. But in the United Kingdom, the United States and elsewhere in the world, there have also been spurious and politically motivated attempts to undermine trust in knowledge and in knowledge-based institutions.”

He continued: “But around the time when I became vice-chancellor, it seemed to me to be reaching new heights, and it permeated public discourse in all sorts of insidious ways. Fast forward to today. What do you know? Well, it turns out that COVID-19 has taught us that we do need experts – people who seek to understand complex problems and search for pragmatic solutions post COVID-19. And there is a great public acknowledgement of this fact.

“It’s often remarked that crises don’t really change leaders but reveal their limitations. I think the same is true about organisations or governments – even of societies. A crisis reveals strengths and exposes weaknesses. And the past six months have shown why universities like Cambridge and UCT are more necessary than ever.”

It’s also crucial to their success that universities address diversity – in people, knowledge systems and ways of being and seeing, said Phakeng. Toope agreed. The crisis has revealed the real constraints and limitations of “baked-in” inequalities in the higher education system, he said. As Cambridge’s first non-British vice-chancellor, his own experiences were shaped in Canada with its indigenous groups and cultures, and particularly during his time at the University of British Columbia.

“There are ways of being that have to be allowed into the university environment, along with the ideas. It’s not just written texts and reports of cultures, etc. It has to be how people actually understand their place in the world, how it is that they interact with other people.”

“How do we best engage with and learn from complex and uncomfortable histories?”

Many Western institutions, he said, struggled to accept challenges to existing academic patterns and to respect different ways of thinking.

“And I think the worst thing that can happen is in bringing in different knowledge systems, but then treating them as kind of museum pieces off on the edge.”

This remains a challenge for universities claiming to serve their societies.

“For instance, how do we ensure our universities are truly representative and welcoming to the wide range of talent that exists in our societies across all boundaries of race, class, sexual orientation, social status and so on? How do we best engage with and learn from complex and uncomfortable histories? And here we can draw a direct line between questions about decolonisation being raised at UCT and questions now being raised in Cambridge around legacies of slavery and continuing patterns of racism in British society.”

And despite the current confusion caused by the United Kingdom government’s “chaotic response [to COVID-19] through rapid and unpredictable changes in government policy”, Cambridge admitted its most diverse cohort of students ever for this academic year, Toope said.

As UCT and Cambridge are members of the International Alliance of Research Universities, an 11-partner network across nine countries, Phakeng drew the conversation back to collaboration, which is essential in dealing with “planet-sized problems”.

“We simply can’t do it alone. There’s nothing like a global pandemic to reveal just how intricately and profoundly connected we are … In a world of constrained resources and with challenges increasing in both complexity and scale, collaboration is imperative. The lone researcher or even the lone institution is no longer a viable model for the delivery of world-leading contributions.”

Turning to partnerships in Africa, Phakeng asked what Toope’s university would do differently in the wake of COVID-19.

“We’re just beginning to figure that out … We were talking before about the idea that we could create more classrooms on a shared platform where students from UCT and Cambridge could be on the platform together. We discovered [through COVID-19] that we can deliver this kind of programming; we can deliver teaching online in a more fluid way than we might have imagined.”

He continued: “We’re going to have to be more intentional about creating online opportunities that are rich and truly interactive … building platforms where there’s more engagement with a wider group. And we must strategise about that. And we must do it quickly. I would say both on the research and the teaching side, there are real opportunities that come out of this.

“And we should seize them. Even if it’s just pilot projects to get going and build confidence about how we can collaborate more effectively.” 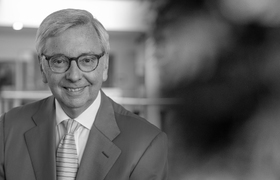 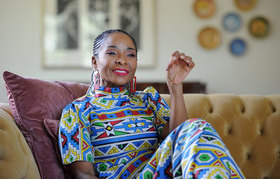 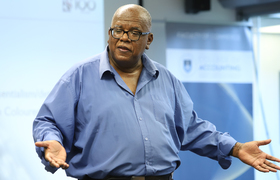