‘Seven threats to the future of the academy’

Hosted by the University of Cape Town’s (UCT) dean of Commerce, Associate Professor Linda Ronnie, Professor Jonathan Jansen addressed the faculty on Tuesday on what he perceives to be the most critical “threats to [the] future of the academy” in contemporary South Africa.

Jansen is an internationally renowned scholar who served as the University of the Free State’s first black rector and vice-chancellor and now holds the post of Distinguished Professor of Education at Stellenbosch University. In his address, he described himself as “deeply concerned, intellectually”, as well as politically, about the future of institutions of higher education.

“I need to know how we can change our universities in a deep way, so they don’t become like universities in the post-colonial period,” he said. “I come at this with an intellectual interest but also a very deep political interest, to make sure that Africa, and South Africa, has strong universities.

“The calling of a scholar is to look at things that appear complex and ask really hard questions of that thing; [to] go beyond the surface features of the event. So, for example, when you see protests on campus, particularly violent protests, an important question to ask, even while things are burning, is: ‘What on earth is going on here?’”

The first threat to the academy that Jansen examined was academic corruption as it pertains to academic promotion policies. This point relates directly to a recent article in Business Live in which he criticised a South African university for its promotion policies, claiming the institution had lowered the employment bar for black academics.

The process is part of what he described as “a legitimate attempt to get more black and women scholars into the academy at the level of professor”. However, he warned, institutions are taking shortcuts and will “destroy the academy in the process”.

“I’m proud enough as a black person that I don’t want to be insulted in that way.”

“I’m proud enough as a black person that I don’t want to be insulted that way.”

His second point highlighted the threat of political intolerance: the lack of critical feedback currently within the academic context in South Africa, and the reluctance of academics and scholars to speak against what he called the “new orthodoxy”.

“For me, a university is the one place in which we must be able to debate and still be friends. If there is no critical feedback at a university, you may as well call it a church.”

The third danger he raised is that of racial nativism with regards to academic appointments. He expressed shock that at UCT there had been controversy over the appointment of a non-South African academic.

“You do not ask questions about national origins [when it comes to] appointments,” said Jansen. “It will be the end of us.”

He next discussed justified violence as a response to structural violence and drew attention to the threat of institutional decay, as well as the threat of professorial timidity.

This “professorial timidity”, he said, was an unwillingness to radically alter the status quo. When the decolonisation debate began, there were meetings held throughout the academy to determine what this might mean.

“For most academics, [decolonisation] meant localisation of content. There is nothing inherently progressive in localising content. It is South Africanisation; it is certainly not decolonisation.”

Jansen, perhaps surprisingly, felt that the concept of decolonising education is not radical enough: “[Decolonisation] is not dealing with the epistemological rock on which post-apartheid knowledge was founded. That has to crack.”

Racial essentialism and determinism were raised by Jansen as the final threat to the academy.

“This notion that there are four races is something that you can’t shake out of South Africans,” he said.

“What’s worse is that they believe [the races] are hierarchically arranged; that one is better than the other. So, if you look in journals … like the The Lancet, you know what still appears there today? [There] is research on coloured people and tuberculosis … You don’t get TB because you are coloured. You get TB because you live in a poorly ventilated house that is damp.”

Jansen’s advice for countering these threats to the academy was firstly to talk about them in a way that allows everybody to speak.

“Secondly, let’s deal with this as a curriculum problem. How do you fundamentally transform the curriculum? Bring in people to think deeply about these issues rather than only thinking politically about them,” he challenged.

“Deal with it at the level of representation, but not in a superficial sense, in the sense that you really bring in the best people from everywhere in the world, and everywhere in our country.

“Do not deal with [these threats] just because you are under pressure from student politics.” 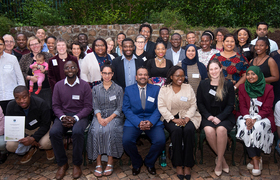 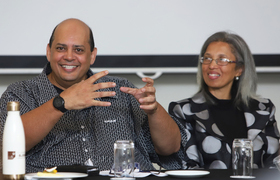 News
Transformation is heart work 24 May 2019