The Baxter Theatre Centre at the University of Cape Town (UCT) hosted the Rolex Arts Weekend, which featured the Rolex Mentor and Protégé Arts Initiative, on Saturday, 8 February, and Sunday, 9 February.

More than 200 renowned artists and arts leaders from South Africa and around the world attended the prestigious event, which featured the work of the 2018/2019 protégés of the Rolex Mentor and Protégé Arts Initiative.

The two-day celebration marked the culmination of the 2018/2019 cycle of the programme, which pairs master artists with emerging artists in several disciplines for a period of creative exchange in a one-to-one mentoring relationship.

Four of the most ground-breaking and influential artists in their respective disciplines – Spike Lee (film), Phyllida Lloyd (theatre), Lin-Manuel Miranda (open category) and Carrie Mae Weems (visual arts) – were named as mentors for the 2020/2021 cycle on Saturday night at a special gala ceremony. These world-renowned innovators will each spend the next two years in close collaboration with an outstanding young artist with whom they will exchange ideas and ensure that artistry at the highest level is transmitted across generations and geographic boundaries.

The arts weekend kicked off on Saturday with the symposium titled, “Who is Unrepresented in the Arts Today? The Arts in Times of Polarization” and included panellists like Baxter Theatre Centre chief executive and artistic director Lara Foot, Palestinian film director and poet Annemarie Jacir, renowned cellist Yo-Yo Ma and Nobel Prize for Literature winner Wole Soyinka. There was a surprise visit, much to the delight of audiences and guests, by tennis star Roger Federer who joined the last 20 minutes of the discussion.

The event ended on Sunday evening with a performance from music protégé Marcus Gilmore, an innovative young drummer from the United States, who presented the world premiere of his composition Pulse, which was commissioned by the American Composers Orchestra. Gilmore performed the work with musicians from the Cape Town Philharmonic Orchestra and its resident conductor, Brandon Phillips.

Arguably one of the most seminal arts gatherings in South Africa in decades, this was the first time that the Rolex Arts Weekend has been brought to Africa. 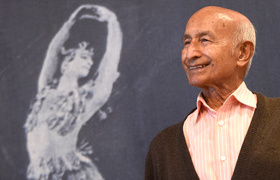 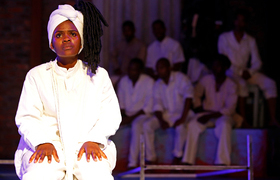