When Laxmee Sobhee-Beetul walks across the University of Cape Town (UCT) stage on 12 July to receive her PhD in geotechnical engineering, she will be completing a journey that began when she was a teenager, chatting to her father in the garage.

She jokes that her favourite words have always been, “But why?”.

“Even as a child growing up in Mauritius I was always exploring and enjoyed experimenting,” she said, adding that she was however an “indifferent” learner until she reached high school.

“Then everything changed,” she recalled.

“I became fascinated with mathematics and then later I developed a huge passion for physics. Almost overnight I became a very serious student and, with the support of my family, I got some of the best marks in my high school across all the subjects I did.”

As a teenager she wasn’t sure what career she wanted to pursue but she knew she wanted it to be meaningful.

“I was lucky in that my parents, and my father in particular, never told me I couldn’t do something because I was a girl. In fact, he always encouraged me to be very independent.”

Her father fixed cars in his spare time, and it was while he was working on a car in their family garage that she first heard the word engineer. She was immediately interested in a profession which seemed to be both immensely useful and well-respected.

“I was lucky in that my parents, and my father in particular, never told me I couldn’t do something because I was a girl.”

Sobhee-Beetul arrived in Cape Town in 2006 to begin her undergraduate degree in civil engineering at UCT.

“I had made up my mind that I would work as a site engineer upon completion of my degree. I remember my mom asking if that meant I would have to wear a hard hat to work every day and I told her, ‘Mom, it doesn’t matter as long as I am doing something I love’.”

It was in the same year that she met a fellow UCT student on the plane coming back from Mauritius.

“Of course, I didn’t know it then that he would turn out to be the man I married. Back then I assumed I would be finishing tertiary education soon. However, I did not know that there would be a turning point on this journey. [And] little did my husband know then that he would be married to a student for the next decade.”

In her third year of study, she discovered a branch of civil engineering called geotechnical engineering.

“I was immediately fascinated ... and in my final year of undergraduate studies I approached my supervisor, Associate Professor Denis Kalumba, to explore the possibility of doing my final-year thesis in geotechnical engineering.”

That meeting was to prove a watershed moment.

“Thanks to Prof Kalumba I discovered that I could follow a research track into academia in civil engineering. After being exposed to all the information, I was determined to follow this path, which was described to me as long but interesting.”

“Every day was a challenge, but today my dream has become reality.”

She focused on the use of waste plastics to improve the performance of soils for construction projects. One of her motivations was to further her civil engineering career while still caring for the environment.

In her second year of PhD study she also gave birth to her son.

“It was not easy to be a mother and studying, but I kept going, thanks in large part to the support I received from my husband, my parents, my son and especially Prof Kalumba as my supervisor. Every day was a challenge, but today my dream has become reality. I am now graduating with a PhD in civil engineering specialising in geotechnical engineering.

“It also makes me feel very content to know that I am the first woman to graduate with this degree at UCT because it makes me feel I have lived up to my father’s belief in me.”

Her son, who is now five years old, initially had some trouble understanding the nature of Sobhee-Beetul’s studies.

“At first he was concerned I was becoming a medical doctor but I explained more about my research and now he tells everyone that his mom is an engineer and a doctor of soil!”

What does the future hold now that Sobhee-Beetul has completed her journey to graduation?

“I intend to continue my research focus on ways of improving the performance of soils to accommodate for construction, while still considering the environment, because I do have a strong desire to do something that is going to help people,” she said. 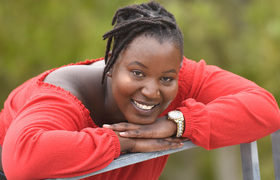