The University of Cape Town’s (UCT) Associate Professor James “Jimmy” Winfield continues to rack up awards for teaching excellence. But for the College of Accounting lecturer, it is all about making a difference.

Reflecting on his motivation in life, Winfield recalls his days as a waiter: “I used to love the fact that people would come in hungry and a bit grumpy and then, at the end, they would leave with a smile on their face and I had a little bit to do with that.”

While those days may be over, he thrives on bringing a similar satisfaction and enjoyment to those he teaches at UCT. It’s a formula that has served both the students and Winfield well, evident in his array of awards and the affectionate nickname, “Uncle Jimmy”, by which many students refer to him.

His latest accolade is the 2018 CHE-HELTASA National Excellence in Teaching and Learning Award that he received in November. The award is the result of a collaboration between the Higher Education Learning and Teaching Association of Southern Africa (HELTASA) and the Council on Higher Education (CHE) and is the most prestigious national award in teaching and learning in higher education.

It is his 11th award for teaching excellence, coming on top of nine awards from the Graduate School of Business and UCT’s Distinguished Teacher Award in 2016. Winfield was also involved in the innovative Learn Accounting project and led the introduction and development of the Business Ethics course, which received UCT Collaborative Educational Practice Awards in 2016 and 2017, respectively.

But, as much as the awards are certainly welcomed, that original desire to make a difference while satiating students’ hunger for knowledge is what still drives Winfield so many years after taking up teaching.

While his award-winning moments have occurred during his tenure as a lecturer at UCT, his role as a teacher started a lot earlier.

“Teaching has been a very noticeable thread running through my career,” he says.

He obtained his Bachelor of Business Science degree, a Bachelor of Commerce (Honours) and a Postgraduate Diploma in Accounting from UCT. While studying, he also took on the positions of sports coach, tutor and then assistant lecturer before leaving South Africa to study at the University of Oxford.

There, he obtained a master’s in philosophy, politics and economics, financed through a Rhodes scholarship. It was at Oxford that he decided to change direction.

“I had always imagined myself being a CEO of some company,” he says.

Studying philosophy altered his perspective and helped him to focus on what mattered most – making a difference and having real impact. He reflected on his time as a waiter and the purpose he felt as a teacher and decided that this would be his life’s journey.

After Oxford, he taught maths at a middle and a high school in California. But his love for South Africa brought him back home and he returned to UCT in 2006, this time as a lecturer in the Faculty of Commerce.

Since his return, one of his most notable interventions has been JumpStart, a programme that began in 2010 for first-year financial accounting students who risk falling through the cracks. These students receive academic and psychosocial support and, as Winfield notes, the programme has “been very successful”.

“Teaching has been a very noticeable thread running through my career.”

Teaching and learning too

Winfield refers to the day he received the Distinguished Teacher Award at a Commerce graduation in 2017 as the “highest point” of his academic career.

“When my name was called … all of the students got up and started cheering and giving me a standing ovation. I had tears running down my face…

“That spontaneous kind of acknowledgement was much more important to me than any piece of paper.”

Although he is clearly an outstanding teacher, he learns from his students too. For example, he recalls how in 2011, while teaching affirmative action, he was challenged on how one ought to find role models. While the literature suggests that one ought to find them by looking beyond demographics and rather at work performance, a young Cameroonian student approached Winfield after class to give him a memorable, teachable moment.

“She said, ‘Look, I think you are quite a good teacher most of the time but here, you have got it completely wrong’.”

The student argued that, based on race, sex, culture and youth, black South African women are at the bottom of the ladder. For that reason, they must see role models who mirror their looks and experiences.

“It was a really powerful argument… she kind of flawed me,” says Winfield, adding that ever since, he has altered the way he teaches affirmative action.

While personal drive to make a difference, and a love for teaching, praise from students and winning awards certainly make success easier to achieve, colleagues have made a significant contribution to Winfield’s career.

“I have got to work with really excellent colleagues,” he says, adding that whatever he has achieved in collaboration with them is far more than what he could have accomplished on his own.

Heads of departments in both accounting and philosophy have also enabled Winfield’s teaching excellence, providing support, trust and valuable advice.

Of his colleagues, Winfield says: “There is certainly excellence all around me and that’s been a large part of my modest successes.” 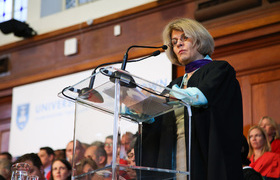 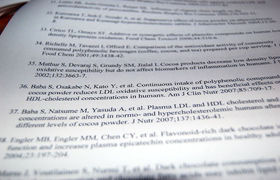