Professor Tania Douglas kicks off her TED talk with an image of what she calls an “equipment graveyard”, a “typical final resting place for useless medical equipment from hospitals in Africa”.

Most of the devices were imported, and in many cases unsuited to African conditions – because they need highly-trained staff to operate, maintain and repair them, or a constant electricity supply which might be unavailable, or simply because they weren’t designed to withstand high temperatures or humidity.

Douglas, director of the University of Cape Townʼs (UCT) Medical Imaging Research Unit in the Division of Biomedical Engineering, firmly believes that Africa has its own unique medical challenges which require unique African solutions. And it is her work in this field that led to her inclusion on the prestigious recently-released list of 30 Quartz Africa Innovators for 2018.

The Quartz list is an annual series which identifies some of the most ambitious and imaginative minds on the continent.

Douglas, who is also the National Research Foundation/Department of Science and Technology (NRF/DST) South African Research Chairs Initiative (SARChI) Chair in Biomedical Engineering and Innovation, said she was “surprised, but pleased” to feature as one of Africa’s top innovators in the fourth edition of the series.

According to Quartz, the 30 “movers and thinkers” on this list were selected from a range of disciplines, from the arts and science, to technology and entrepreneurship.

“They all have one thing in common: a burning drive to make an impact on their communities, countries – and ultimately the continent,” the organisers said.

“We harness the talent by building the creative confidence that enables the talent to be applied to our very real problems.”

Douglas said her listing is significant because “it highlights the importance of health innovation and technological innovation that is specific to the needs of the South African and African realities”.

She regards herself as a “facilitator of innovation, rather than an innovator in the conventional sense”, although she’s extremely grateful that her “innovation-enabling efforts” have been recognised. Douglas wants to see those who work alongside her included in the acclaim too.

Africa, she said, has no shortage of innovative minds “who understand our context and are able to adapt to our local circumstances”.

“We harness the talent by building the creative confidence that enables the talent to be applied to our very real problems.”

In her TED talk, Douglas cites a few examples where developers of medical technology have clearly taken the context into account, like an antenatal heart-rate monitor, comprising a horn connected to a smartphone, which was invented by two young Ugandans.

Another is the “smart glove”, invented by UCT colleague Dr Sudesh Sivarasu for people with leprosy. It provides an artificial sense of touch to patients who have suffered nerve damage as a result of their illness. Without a sense of touch in their hands, they are at risk for injury.

“We need to focus on needs and people in context. Africa is a diverse continent with vast disparities in health, wealth and education,” said Douglas.

“If we assume our engineers and inventors already know enough about the different African contexts to solve the problems of our different communities, we might get it wrong,” she warned, adding that understanding context is a deeper engagement rather than only a superficial interaction.

Douglas was recognised on the Quartz list for her key role in assessing and developing a range of health technologies in Africa, including her contribution to the formation of CapeRay Medical.

The company is commercialising a breast-imaging solution that combines X-ray imaging and ultrasound. This opens the way to effective screening for women with dense breast tissue, and for whom mammograms are not sufficient.

As Chair in Biomedical Engineering and Innovation, she said she aims to strengthen the research and innovation capacity of public universities, mainly through training postgraduate students.

She is also very involved in the African Biomedical Engineering Mobility project, which funds postgraduate education in the field across Africa, and has established an MPhil in health innovation at UCT. This master’s programme specifically focuses on including students from a variety of backgrounds “because innovation is not only about technology”.

“I like the idea of sending students out into the world who are able to make some kind of contribution.”

“The degree programme started in 2016. The first cohort of four students has completed their dissertations. We only had one entering student in 2017, but six in 2018, and weʼre likely to have a similar number starting in 2019.”

One of the key courses taken by the students is on disability as diversity, which is offered by the Department of Health and Rehabilitation Sciences.

“This course complements our design-thinking approach, in that it engenders an understanding of the lived realities of groups that are often excluded from the design of health innovations and health technologies, even though they may be intended recipients of such innovations,” Douglas explained.

Some of the projects students have worked on include improving the experiences of deaf people at an eye clinic, improving patientsʼ adherence to medication, and addressing hearing loss in the elderly by focusing on stigma and environment, rather than assistive devices.

Among the research projects are reviews to assess the effectiveness, usability and potential of mobile (eg smart phone) health applications, and evaluating the manner in which universities engage with communities.

Douglas also recently launched the Global Health Innovation journal, aimed at sharing knowledge on addressing the health needs of the developing world through innovation. The journal will be freely available online so that people from lower-income countries can access its scientific knowledge.

Douglas studied electrical and electronic engineering at UCT, and completed her masterʼs and PhD degrees in biomedical engineering at Vanderbilt University in the United States and the University of Strathclyde in Scotland, respectively. She completed a postdoctoral fellowship at the Japan Broadcasting Corporation in Tokyo prior to joining UCT as a lecturer in 2000.

More recently, she completed an executive MBA at UCT.

Of her passion for innovation, she said biomedical engineering is fascinating, and “keeps me entertained”.

“I like the idea of sending students out into the world who are able to make some kind of contribution, but of course, itʼs critical that they have a positive experience while at UCT.

“I have experienced UCT as a supportive environment and have had wonderful mentors; I strive to extend the same kind of support to students and junior colleagues, and I learn so much from them in the process.” 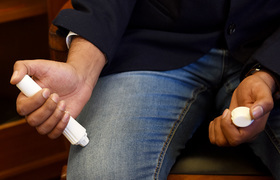 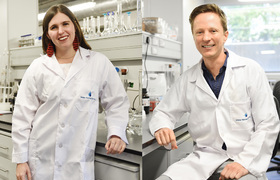