Upgrading the largest experiment on Earth

From December 2018 until early 2021, CERN’s Large Hadron Collider (LHC) will be shut down. After almost five years of hard work accelerating particles to almost the speed of light and crashing them into one another, the facility needs maintenance – and upgrades. Upgrades that will see the rate of collisions increase by five times.

This will also be a time of upgrades to the experiments on the LHC circuit. South African scientists, including from UCT, will be among those developing the new hardware, installing it and testing it.

Although South African physicists have been collaborating with CERN on the ALICE experiment for 10 years, SA-CERN’s responsibilities have been expanded ahead of the upgrades and formalised with a memorandum of understanding.

The upgrades to ALICE will take the form of a massive collaborative effort by physicists from all over the world to rebuild parts of the experiment’s muon detector and transition radiation detector.

“The agreement between CERN and the Department of Science and Technology has put in writing that South Africa is officially a member of the collaboration and involved with upgrades to two of the detectors used in the ALICE experiment,” explains Dr Tom Dietel, a CERN collaborator since 2005 from UCT’s Department of Physics.

The upgrades to ALICE will take the form of a massive collaborative effort by physicists from all over the world to rebuild parts of the experiment’s muon detector and transition radiation detector. These detectors pick up signals from muons – sub-atomic particles that rarely interact with matter and thus cannot be easily identified among the signals left by other particles – and electrons, respectively.

Although a lot of the groundwork has already been laid, efforts will be ramped up over the next two years while the LHC is shut down.

“We will have to be ready to take data at the beginning of 2021,” says Dietel. “When the first beam comes on, we better have a tested system.”

On completion of the LHC’s upgrade in 2021, it will be five times more powerful than it currently is. In other words, it will be able to produce five times more heavy-ion collisions. In many ways, this will be a quantum leap for the LHC experiments and increase the capacity for new discoveries immensely.

In addition, these new technological advancements will allow scientists to collect all of the data generated by ALICE; at the moment, they have to throw away 95% of it because the computers installed 10 years ago could only process a few gigabytes per second.

The new system will be able to handle 100 times more data – about three terabytes per second – which means the software for processing the data will also have to be rebuilt.

South African institutions are shouldering responsibility for three areas of the upgrade to ALICE: readout electronics for the muon identification detector, data processing for the transition radiation detector, and low-voltage power supply and distribution for the muon tracking detector.

“On the muon detector, our focus will be upgrading the readout electronics: taking the data from the detector and transferring it to computers,” explains Dietel. “On the transition radiation detector, it’s mostly about what we want to do with the data once it’s in the computer. Basically, building software that can process it.”

As far as power supply for the muon tracking detector goes, Dietel explains it in terms of plugging in a laptop and admits that it sounds like a boring job.

“Essentially, we are plugging the electronics into a power supply. However, this becomes a bit complicated if, first, you’ve got 1 000 electronics. Second, your power supply is 10 or 20 metres away. Third, you want to remotely control everything.

“And lastly, you’re pretty much locking away your whole system for 10 months per year for the next 15 years – so it needs to work for a long time.”

Although the SA-CERN institutes will be involved in all of these projects, UCT’s responsibilities lie mostly with data processing for the transition radiation detector. UCT’s Department of Electrical Engineering will also be involved in the readout electronics upgrade.

A network of expertise

Dietel has no illusions about the steep learning curve lying ahead for SA-CERN, in general, and UCT, in particular. However, he sees it as an immense opportunity for growth.

Two experiments to understand the nature of the universe

Beams of particles travelling in opposite directions at the speed of light shoot into each other inside the Large Hadron Collider (LHC). When they crash, these particles create debris in the form of new particles that fly from the collision in all directions. Detectors positioned along the collider record this particle debris; two of them are ALICE and ATLAS.

ATLAS: looking for the smallest units of matter

What are the basic building blocks of matter? What are the fundamental forces of nature? These are the sorts of questions – essential to particle physics – that ATLAS (A Toroidal LHC Apparatus) tries to answer. ATLAS is designed to exploit the full potential of the physics opportunities that the LHC provides – from the search for the Higgs boson to extra dimensions and particles that make up dark matter – and to test the predictions of the Standard Model of physics, which explains how the basic building blocks of matter interact.

By crashing massive ions – such as gold or lead nuclei – into one and other, ALICE (A Large Ion Collider Experiment) tries to recreate the state of matter predicted to have existed in the earliest moments of the universe. Quark–gluon plasma, as it’s called, last existed billions of year ago, a fraction of a second after the big bang. Whereas particle physics and ATLAS are concerned with the most basic building blocks of the universe, ALICE is concerned with heavy-ion physics and how those building blocks make up more complex systems – including the most extreme systems imaginable, such as the quark–gluon plasma. 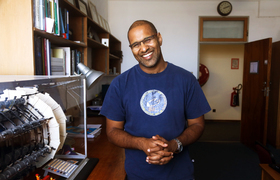 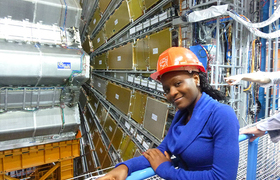 Research and innovation
The first time I visited CERN, I was speechless – Chilufya Mwewa 23 Nov 2016