Why the Higgs Boson matters 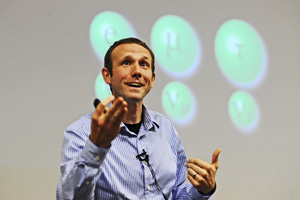 Delving deep: Dr Andrew Hamilton explained the inner workings of the sub-atomic particles that make up matter as we know it, including the much-publicised Higgs Boson particle.

Public interest in physics spiked after the European Centre for Nuclear Research (CERN)'s announcement on 4 July that it had detected a particle that looked and behaved like the mythical Higgs Boson particle for which scientists have spent decades searching.

Many have been wondering just what all the fuss is about.

UCT's Dr Andrew Hamilton's public lectures on 6 and 10 September went some way towards shedding light on this memorable moment in scientific history.

Hamilton spent five years working on the ATLAS project at the Large Hadron Collider (LHC) at CERN, the decades-long experiment to detect the Higgs Boson particle, before joining UCT as lecturer in the Department of Physics in 2011. So, when the Faculty of Science invited the public to hear the physicist share insights into the Higgs-inspired public furore, it was no surprise that every seat was filled.

Particle physics, explains Hamilton, is understood through two main (and competing) models: the Standard Model, and Albert Einstein's theory of general relativity. The Higgs Boson is a fundamental - and, before 4 July, the only hypothetical - particle in the Standard Model.

"If you want to know how the molecules that make up your body stick together the way they do, how the sun shines, why the sky is blue, why water is liquid in temperatures found on earth, or why we don't fall through the floor, all of the answers are contained in the equation of the Standard Model," Hamilton summarises. "This whole system, the Standard Model, only fits together if the Higgs Boson is there to make it work."