Digital avatars – specimens captured via X-ray 3D micro computed tomography (micro-CT) scanning technology – give taxonomers a new tool to ‘dissect’ and study rare or delicate specimens on their computer screens, without (or in addition to) museum or natural history collections and artists’ replicas.

This is an important development for the description of new species and will aid scientific collaboration as researchers can examine the digital sample of the same specimen at different places and times. Actual specimens, many rare and valuable, are difficult to ship around and can be examined by only one person at a time. 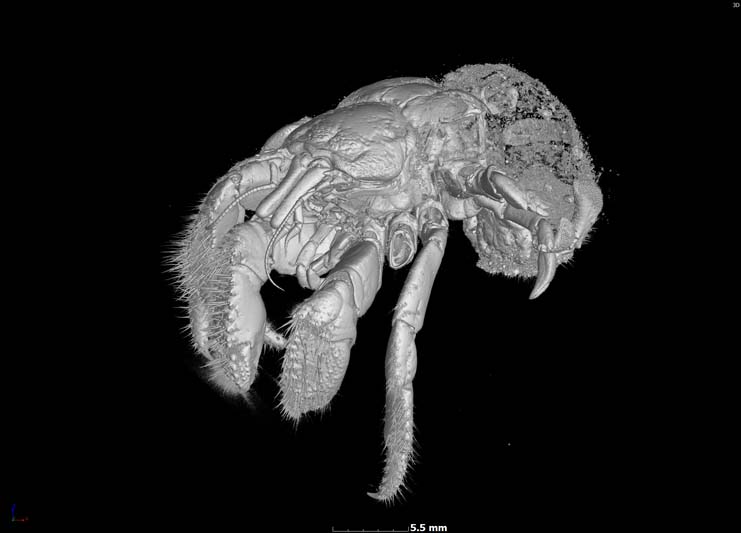 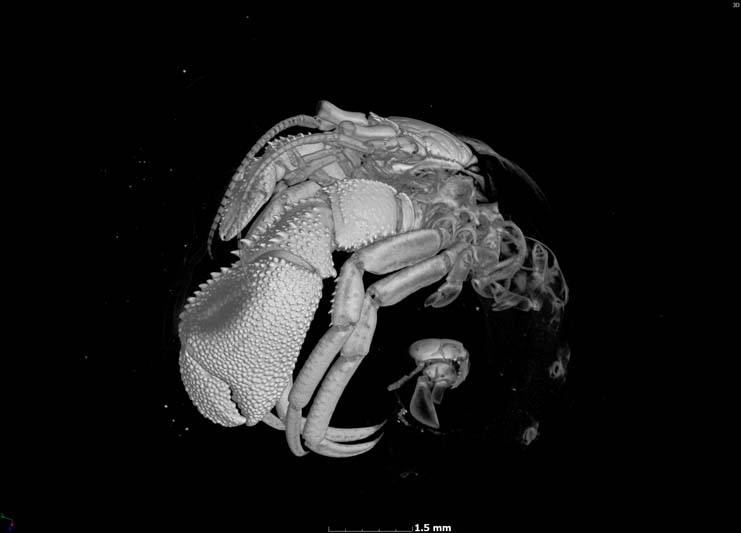 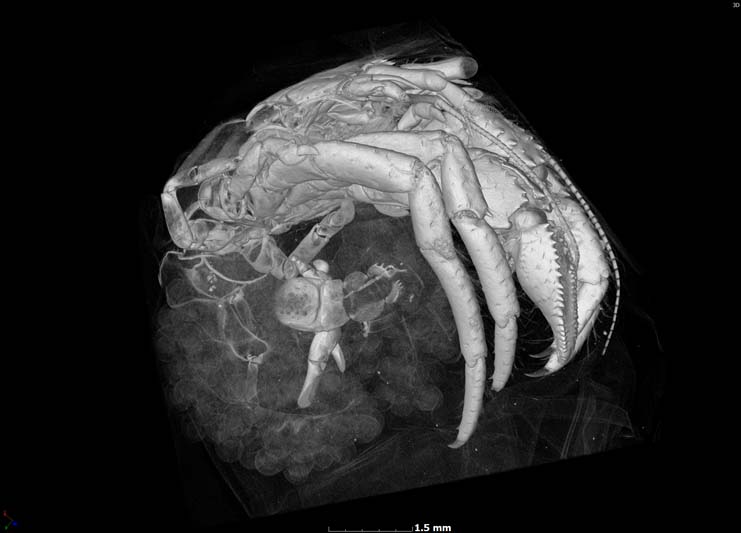 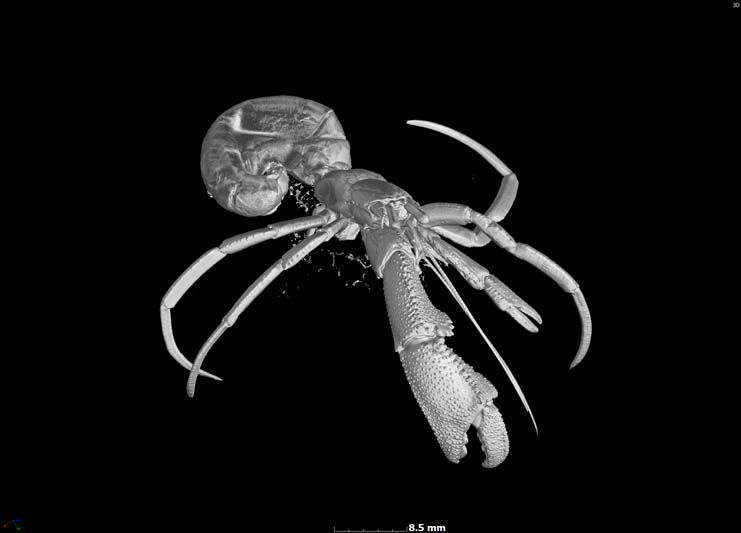 Marine biologists at UCT and Stellenbosch University recently used this technology to scan seven hermit crab species. These include one as yet undescribed species as well as two scans of rare species, one from a deep-sea habitat at over 500 metres. Three are species that are new to science and are described in Landschoff’s PhD thesis.

Landschoff is the lead author of a paper on the technology, featured in GigaScience, titled “A micro X-ray computed tomography dataset of South African hermit crabs (Crustacea: Decapoda: Anomura: Paguroidea)”. His co-authors are his supervisor, Emeritus Professor Charles Griffiths (Department of Biological Sciences), and Anton du Plessis of Stellenbosch University.

These specimens are held at the Iziko Museum in Cape Town and at the Smithsonian National Museum of Natural History in Washington, DC. But scientists, or even amateurs, who’re also interested in having a look can now do so online. The 3D scans and 3D printer files are available from the GigaDB repository.

Until now, scientists have relied heavily on meticulously drawn illustrations of specimens and their sections. But this is not ideal, says Landschoff.

“Taxonomic biodiversity research is a niche market and a difficult field, and the new technology is important as there are several limitations to hand-drawing specimens, especially complex specimens such as hermit crabs.

“A great artist will produce marvellous illustrations. The main limitation, however, is the artist’s skill and the time it takes to produce complicated drawings. When I draw complex structures, for example, of the crab’s pincers, a single illustration can take me a week.”

“When I draw complex structures, for example, of the crab’s pincers, a single illustration can take me a week.”

“On the one hand this is a good thing because the artist can highlight certain characteristics they think are important. On the other, this might over-emphasise some things. So, it can result in mistakes. There is also the issue of reproducibility. Each scientific experiment should be reproducible.”

In an interview for the GigaScience blog, Landschoff says that the power and magnification of X-ray micro-CT also gives a precise picture of surface textures, which are often missing in photographs or manual drawings.

Ironically, hermit crabs are among the most challenging model organisms within Decapoda to use CT scanning on. Many are small, and half of their body – the pleon, which is encased by the scavenged sea shell it lives in – is soft.

“The pleon has many fine-scaled, soft tissue identification characteristics,” he adds. “Because CT scanning is based on X-ray detection, these soft structures are difficult to detect. If hermit crabs can be scanned, other groups like Brachyura [normal crabs], which are entirely calcified, would be very visible for scanning.”

The new technology does need a lot of computing power and special software, which can make it expensive. While the scanning process is relatively quick and easy, the analysis of the 3D data is time-consuming, as is working on the scan data on the computer, cleaning unwanted scanning artefacts, cutting the specimens open virtually, and so on.

As Landschoff says, drawing is cheap and doesn’t come with these challenges.

“I require only a pencil, eraser and paper.”

A crab in hand

On the other hand, the CT images are very powerful, which makes this a useful tool for education and training. The scans provide a powerful connection to the real thing.

“When I can show a high-resolution rotation movie to an audience instead of a picture of a colourless specimen in a jar of alcohol, that’s a huge advantage in making taxonomy more interesting in general,” Landschoff explains. “I still believe that having a living specimen at hand is the most fascinating thing for students of biology.”

With over 1 100 species and 120 genera of hermit crabs described to date, and with very many species undescribed on museum and laboratory shelves, this digital advance should broaden options and possibilities for greater coverage of specimens.

(Landschoff’s new paper in PlosOne, due out later this year, describes a new species of hermit crab for the first time, based predominantly on CT scanning.) 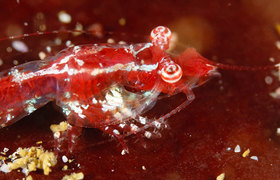 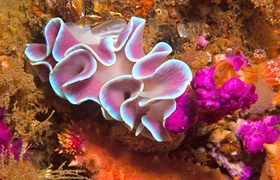