A tiny shrimp with banded, stalked eyes, and gaudy red 'warning' colouring, is the latest of several new marine species to be found by UCT researchers in the extensively sampled waters of False Bay.

The small crustacean, a mere 10 to 15mm long, goes by the charming name of stargazer mysid, so called by divers who first saw it, because its eyes seem to gaze permanently upwards.

But don't be fooled, those apparently large, upward-staring eyes are just a trick of nature, as the eyes of shrimps don't have a pupil or iris. Instead, they're compound eyes like those of insects and consist of many simple elements that each look in a different direction.

The vivid ringed patterns are thought to be there to make the eyes appear to belong to a much bigger creature, and hence to scare off predators.

Griffiths was unable to identify the species and surprised by the shrimp's bawdy colouring and "fake eyes".

"They act like the eye spots on moths' wings," he explained. 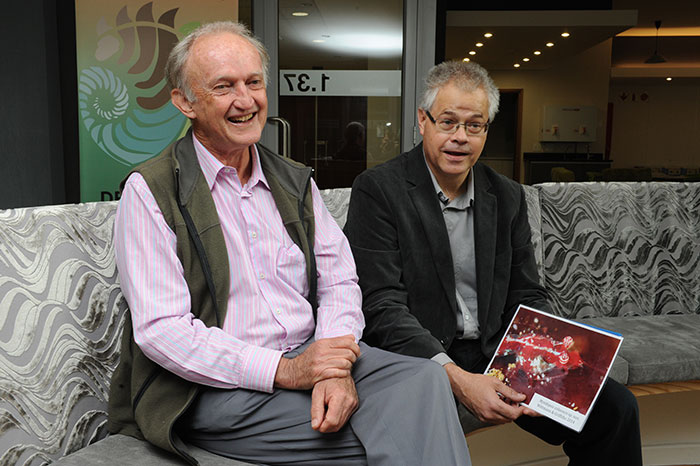 Griffiths sent the samples to international shrimp expert Professor Karl Wittmann off the University of Vienna in Austria, who confirmed it as being a new species and named it Mysidopsis zsilaveczi, after the diver who collected it.

The species is described in a research paper co-authored by Griffiths and Wittmann and published in the journal Crustaceana, and is the ninth Mysidopsis species to be found in Southern African.

The find is the latest 'catch' in an ongoing partnership between UCT and citizen scientists like Zsilavecz, who augment the university's scientific knowledge in botany and zoology.

"We're a bridge between the public and science," said Zsilavecz.

The computer scientist and co-founder of the Southern Underwater Research Group (SURG) learnt to dive as a UCT student and has been exploring the Cape's waters since 1989 (as well as many other exotic locales in both the Northern and Southern Hemispheres).

Fascinated by the sub-marine world, and wanting to share the visual largesse, he bought a Nikonos V underwater camera to capture it all in pictures. He soon began contributing to marine guidebooks and identifying new species, like his favourite discovery, the recently described blue-spotted klipvis (Pavoclinus caeruleopunctatus).

Having something named after him gives him a shot at immortality, Zsilavecz quipped during a presentation in the Department of Biological Sciences last week, a celebration of Griffiths and Wittmann's just-published paper on his discovery.

"This confirms that the coastal waters of this subcontinent are one of the biodiversity hotspots in this genus," said Griffiths.

But there's a twist in this tale.

When Wittmann found he was dealing with a new species, but only had males among the first few samples sent to him, he asked Griffiths and Zsilavecz to collect and send him female samples of the stargazer mysid. They collected eight more specimens from the same reef, which they thought looked different to the males.

"I thought at least one of them must be a female," Griffiths said.

But each of the first two vials Wittmann opened revealed something else, not females, but two more completely new shrimp species – and there may be more in the unopened vials!

"These can form the topic of another paper next year, but we wanted to get the description of this first species published in the interim," said Griffiths. "It's amazing that we're still finding so many new species in heavily dived waters like False Bay, right on our doorstep."

Just recently Zsilavecz also found a new species of nudibranch (a soft-bodied sea slug) at Long Beach, a flashy, fleshy little creature with large green lobes and 'wings' that resembles the Sydney Opera House. (Zsilavecz has written a guide on nudibranchs of the Cape Peninsula and False Bay.)