The University of Cape Town (UCT) was open today, 25 October 2017. Many classes, tests, academic and PASS departments continued their work. A number of disruptions were reported, and the executive has expressed deep concern about these disruptions and the effect that they are having on students, staff and our ability to conclude the academic year. Read the campus announcement...

The University of Cape Town (UCT) is open today, 25 October 2017, and the UCT executive is supportive of the call for President Jacob Zuma to release the Fees Commission report. Read the campus announcement...

Yesterday evening the UCT executive and members of the Senior Executive Task Team (SETT) initiated a meeting with Students’ Representative Council (SRC) members and protest leaders. The meeting discussed the students’ demands. The executive indicated that some of the demands were already being addressed, or were in the process of being addressed, and that there is a continued commitment to try to resolve the issues.

Some demands, however, were outside the scope of the executive’s ability, eg the release of the Fees Commission report. There was also a need to clarify details around some demands. During the meeting, further demands were listed to which the executive simply could not immediately respond, including a call for the entire institution to be shut down on Wednesday, 25 October 2017, and that all staff and students should join a march to parliament. The executive indicated that this demand was not feasible and could not be met.

This morning several protesters attempted to disrupt services on campus and set off several fire alarms. While the executive remains committed to continued engagement with students in their efforts to resolve issues, the forced shutdown attempts remain deeply disturbing.

In light of the disruptions to academic operations on Tuesday, 24 October 2017 – including laboratories that typically house dangerous materials – and the indications that there might be further disruptions today, Wednesday, 25 October 2017, the executive made a decision this morning to secure the services of a private security company with the express brief to assist in safeguarding high-risk venues on campus.


Go to the campus updates page. 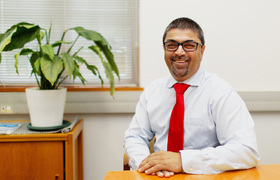