Professor Mitchell Shackleton (MA University of Oxford, PhD University of the Witwatersrand) was a senior lecturer at Wits before succeeding Professor Donald Inskip in 1962 as Professor of French at the University of Cape Town, a position he held until 1985 when he retired. During that period he was also Dean of the Faculty of Arts. Unsurprisingly, his time as dean was remembered as being dedicated towards the betterment of the faculty, rather than a time for self-aggrandisement.

Professor Shackleton was a founder of the Association for French Studies in Southern Africa and of its journal, French Studies in Southern Africa, and presided over the association for many years. He brought to UCT, and South Africa, the great names of French academia across a spectrum of interests ranging from African literature to philosophy, which shows how broadminded and intellectually curious this typical Oxbridge scholar was. As a retiree, he also continued to support the association, which has now achieved international recognition.

In 1975 Professor Shackleton was awarded France’s academic distinction – the Ordre des Palmes Académiques – for his contribution to bringing English- and French-speaking peoples together on the African continent.

At a time when publishing was arduous, Professor Shackleton edited and contributed to a number of publications on the canon of French literature, such as Le jeu de l’amour et du hasard and La symphonie pastorale. Even after his formal retirement he continued to publish valuable articles on those authors who interested him most, such as Paul Claudel.

Philippe-Joseph Salazar, Distinguished Professor in Rhetoric in the Faculty of Law, and former Chair of French and former Dean of Arts, remembers this of Professor Shackleton:

“Mitchell was the epitome of an age of urbane and erudite scholarship in French Studies, and Romance Languages at large, when the only boundary that existed between French academia and far-flung outposts in the Anglophone world was physical distance, yet bridged over by intellectual prowess and scholarly engagement. Mitchell was an exemplar of an age when scholars served, in the highest sense of the word, their discipline and he suffered no approximation from peers and students alike. He made sure that young academics were involved in the life of French Studies, thus ensuring succession. He was uncompromising on quality. The study of French is still flourishing today in South Africa (and neighbouring countries) due to his foresight and pioneering work of 60 years ago. This university owes Mitchell a lasting recognition for having illustrated the Chair of French, one of the few foundational chairs of the university.”

“For his last ten years as Head of the French Department, I worked with Professor Mitchell Shackleton and they were happy years in the department. Mitchell’s scholarship, integrity and his care for all his students and colleagues were recognised and appreciated. He was self-effacing and never considered his own interests in dealing with other members of his department, whether senior or the most junior.”

Professor Shackleton was a regular attendee at university events until last year, and he maintained an active interest in UCT.

He had been married for nearly 75 years and leaves behind his widow, Ninon. 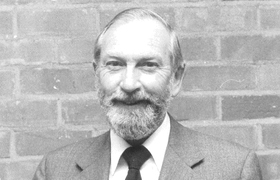