Is all 'engaged scholarship' socially just?

Emeritus Associate Professor David Cooper knows of a nearby upper-middle-class neighbourhood which is mobilising. They'd like to put gated fencing around their community, ostensibly to keep criminals out.

Cooper, a retired sociologist, describes how the Cape Town suburb is trying to persuade a social scientist to design a survey, write up a report and convince the city council that all of the residents want to erect gated fencing around their peaceful suburb on the slopes of Table Mountain.

This anecdote illustrates a question that has vexed Cooper since he argued that universities needed to incorporate a third mission to their teaching (first mission) and research (second mission) responsibilities. This third mission would be one of academic engagement (or “engaged scholarship”, to use UCT's term), particularly with local communities, that promotes “socio-economic-cultural development”, as he puts it.

Is it enough for a scholar to be socially engaged via the scholarship embedded in their disciplinary field, in the technical sense of the term?

UCT defines engaged scholarship as working/engaging with non-academics for “the public good or benefit”. Cooper somewhat amusedly explains that carrying out an academically rigorous survey for a neighbourhood that wants to lock stranger danger out would count as engaged scholarship, strictly speaking.

It follows that merely enacting a third mission and practising engaged scholarship can in some cases be quite “conservative and even reactionary,” says Cooper.

He thus argues that our explanation of engaged scholarship needs to be more widely debated: “You need to specify what type of third mission you're advocating for. In terms of my value system, it's a mission for social justice.”

At the same time, however, groups of UCT academics are digging their heels in, insistent that the first two missions are quite enough; in other words, some reject the third mission as important for a university, let alone whether it should be social justice-oriented.

Until 1994, UCT was largely an undergraduate teaching institution, suggests Cooper. Outside of the sciences, there were relatively few postgrad students and researchers.

Post 1994, UCT began experiencing the first academic revolution that occurred in Europe and the USA from the early 1800s to the early 1900s: it added an explicit research (second) mission to its mandate. Recently, industry-based funding sources, international rankings and a new focus on churning out peer-reviewed publications cemented this mission.

This first academic revolution has trailed a range of complexities in its wake as it slouches through academia's hallowed halls.

“The whole stress on peer-reviewed publications, the ratings, the rankings … There's no ranking criteria for how many working-class students you've got or how much engaged scholarship you do, particularly with community organisations. No criteria whatsoever,” says Cooper.

International ranking systems are all about how many PhDs, international scholars and international publications you have. It's a performance of a neo-liberal inclination, in part to compete for resources – in this case funding – if you will, but it is also rooted in an academic value system of how scholarship is measured.

A second academic revolution is overdue

In his 2011 book, The University in Development: Case Studies of Use-Oriented Research, Cooper argues that South African universities need to catch up to their international counterparts and include a third mission of explicit public engagement. Overhauling the academic promotion criteria would demonstrate this new commitment, for instance.

This would constitute a second academic revolution, which has been transforming international academia since about the 1980s. It happens in pockets (sometimes very big pockets), but as an institution UCT has been slower on the uptake, with many academics refusing to budge from the first revolution, says Cooper.

In his book, Cooper critiques the idea of engaged scholarship involving universities mainly with industry and government – globally known as the triple helix. Civil society remains the “orphaned child” in this equation. For universities to properly fulfil their mandate of advocating for social justice, they need to create a quadruple helix that robustly engages with civil society. 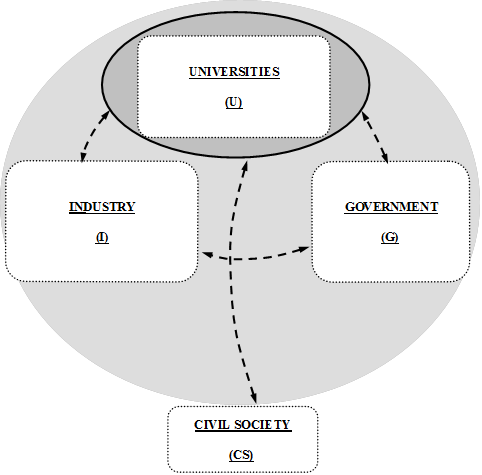 In this traditional arrangement, civil society is the “orphaned child” according to David Cooper in his 2011 book, The University in Development.

It hasn't quite panned out this way, however.

“What I think is going to happen, as is happening in England, is that industry wants you to engage, but for profits. So industry is helluva in favour of the third mission,” he chuckles.

“In the last ten years, British industry has stepped in and said, ‘We want to know what impact your research is having on industry.' The new research evaluation framework for British universities is pushed by industry. Everybody has to show evidence of impact. Are you helping industry?”

As with the gated-community case, which Cooper muses is the quadruple helix in action, this British impact focus would count as engaged scholarship of research too. This presents a complication for South Africa and for UCT.

Much of UCT's engineering research is funded by sectors of industry and some of its health research by big pharma. So, the funding impact on research agendas is difficult to ignore. In a sense, that means UCT's scholars have been engaged for decades in certain ways.

This raises the question of who scholars engage with, instead of simply accepting engagement with any or every non-academic constituency.

“I used to think that if I could just persuade people in favour of the quadruple helix rather than the triple helix, everything would be hunky dory,” he sighs. “Now I think it won't be. 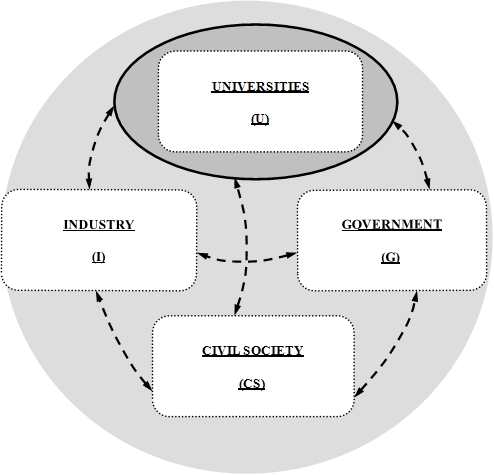 Cooper's initial argument was that this kind of arrangement would allow universities to better fulfil their social-justice mandate. But the reality is far more complex, he argues.

“It's much more complicated. So we need a double battle. We need to win the idea of the third mission, thus simultaneously adding at UCT a second academic revolution onto the first. But this can be sidestepped. People can say, ‘Fantastic! Now engage only with conservative groups in society and about profits for industry, and we don't care where that goes.' ”

But scholars can get creative even within the current use-oriented research funding framework, says Cooper.

“You could do work with the mining industry where you bring in the mining unions and look at how job conditions and pollution can be dealt with. That could be what I call social justice-oriented, [because] you're looking at creating more jobs and better wages and more environmentally green production.

Triple helix can be socially just

“So I would argue that it's quite possible for the triple helix to be socially just as well. There's nothing obviously social justice-oriented about the quadruple helix. In fact, I wish more academics were involved in industry. We need economic growth desperately in South Africa.”

Nonetheless, it's as possible for profit-driven research to have arguably less-desirable outcomes. In a workshop with emerging scholars, one scientist wondered whether working with the military to improve its missiles counted as engaged scholarship.

In terms of the current definition, it did, indeed.

It all comes down to what one understands as the public good, explains Cooper.

The battle of ideas

How does one argue that gating a community or building better missiles is not necessarily in the “public good or benefit”? It's an ideological battle, says Cooper.

“You can't legislate for academics; we need to maintain academic freedom with respect to teaching and research orientation. For example, some economics lecturers at the moment say that a free-market economy will lead to more jobs, and no minimum wage leads to people investing … that whole ideological battle has currently unfolded with some economics students. So there are ideological differences about whether what you teach leads to the public good.

“Some neighbourhood communities will argue that it's in the public good to keep the criminals out and that the best way to do that is gating. I think we need a battle of ideas. Let's discuss the public good. Is your research leading to the public good or not?”