I invite you to participate in an historic process at our institution. Over the next few months, the UCT community has the opportunity to influence decisions regarding the possible renaming of several landmark UCT buildings and spaces.

Every student, staff member, as well as members of the wider UCT community, including alumni around the world, can participate and contribute by presenting views and arguments about whether certain names should be changed or left as is, and if changed, to suggest alternative names.

The question of changing names of buildings was highlighted last year with the discourse around the removal of the statue of Cecil J Rhodes from campus. We recognised that the University community needs to address the issue of whom and what we honour through the naming of buildings. The Task Team on the Naming of Buildings, Rooms, Spaces and Roads was established by the UCT Council in 2015 under the leadership of Dr Maanda Mulaudzi of the Department of Historical Studies. I am grateful to the Task Team for its work that has now brought us to this point where the Task Team will accept proposals for new names.

There have been a number of calls for the Jameson Memorial Hall to be renamed and I have added my name to these calls. The significance of this building, combined with the controversial reputation of Sir Leander Starr Jameson after whom it is named, makes this an appropriate first building to be considered. In order to maintain the momentum of this aspect of transformation, the Task Team is now inviting submissions on this by 15 April and will consider the renaming of Jameson Hall as a priority – with the intention of making a recommendation to the Naming of Buildings Committee and then to Council in June.

In the second cycle, the Task Team will consider the names of several other university buildings that have also already been nominated for reconsideration. These are Smuts Hall, Beattie Building, Wernher Beit Building, and the Otto Beit Building. Submissions are also being invited on these names with a deadline for submission of 30 May. You are also invited to submit the names of other buildings or spaces that you wish the Task Team to consider. These will then be publicised for consultation in the third cycle after June but the names should  be submitted by 30 May.

We think it crucial that as many people as possible participate as this will enable a diversity of views leading to name changes that will give our campus an inclusive and diverse character and symbolize the living democracy we strive for. In offering your views, the first task is to identify and remove names of people whom we think the university should not be honouring or revering. The second is to propose new names honouring other individuals for their historic role in the University or in broader society. There is also a view that we should rather name buildings to signify ideas and values that we would like to see UCT represent and strive for.

In each cycle, the Task Team will first solicit comments and proposals on a particular building's name. It will then construct a proposal for the name change as well as a counter-argument, taking into account the comments received as well as

The Task Team will then canvass the views of the UCT community on its proposals after which recommendations will then be submitted to the Naming of Buildings Committee for recommendation to Council.

This moment of renaming is historic. It is a change that will not just linger in the name boards on the side of buildings but should be a definitive break with a past that we are not all part of and an opening to a future that is much more inclusive and respectful of our different histories, cultures and aspirations. It is symbolic of a transformation not only on our campus, but more importantly of our attitudes and values.

Please note the changes to the submission dates. The Task Team had earlier indicated that the deadline for proposals was 12h00 on 30 March 2016. We have subsequently extended the deadlines to 15 April for Jameson Hall, and 30 May for the other four buildings, in order to give more people an opportunity to participate and to prepare considered responses. 30 May is also the deadline for submission of other names that the Task Team should  consider.

You can gain some important background information, including procedures the task team will use in assessing proposals, by reading the following documents:

Comments and proposals should be motivated and sent to:

I do hope that as many people as possible will take up this opportunity to influence the outcome of this process. We look forward to receiving a diverse range of ideas and names for a large number of buildings and spaces on campus. 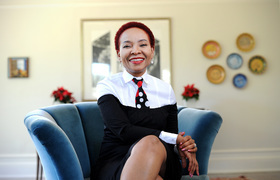